Third waitress clocks in.
2 are now working together. 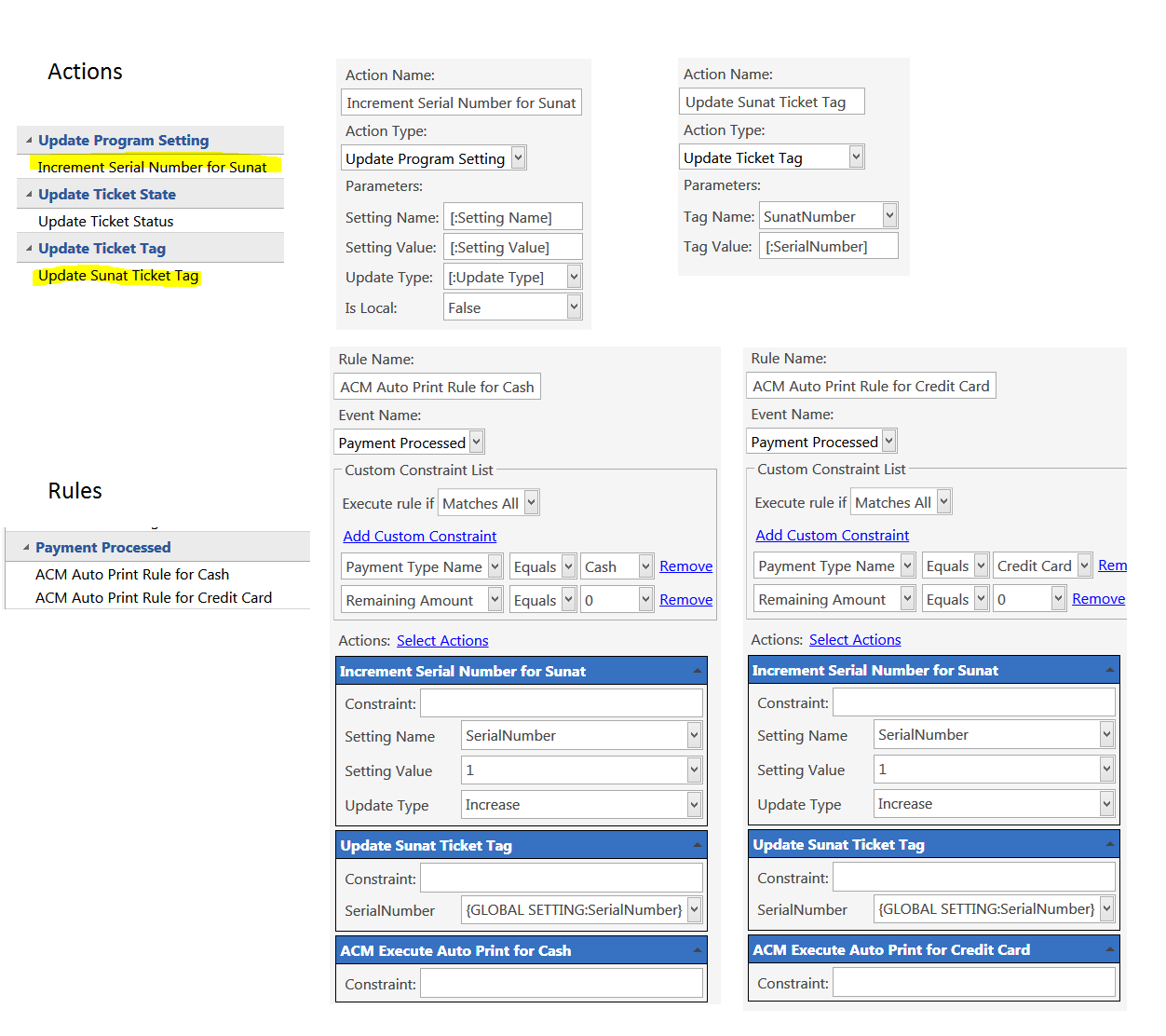 Yes I know I can try this [=variable+1] also, and I will, however there is no reason the Increase method should not work.
It is not an increase problem, it is a “why don’t action Update Program Setting does not update the DB” problem

Program settings work, used all over the place on many systems.

On that report is the first table the current program setting?
If so how come it shows a lower number than on ticket 1501?

Have you tried the formula method, understand increase should work but if you hadn’t tried and it fixes it would show an issue with increase and answer what the problem is…

On that report is the first table the current program setting?

Because SerialNumber is also a variable of SambaPOS (not only a record in the ProgramSettingValues table).
Both SambaPOS programs running (2 waitresses) have their own separate SerialNumber variable that will still increase and be printed on the ticket.

I am not sure that:

One of the 2 statements must be false.

How can they both have a serial running?
The point of using a global program setting is that they would be using the same variable and you get a increasing number increase when either uses it?
If there was an issue with delayed update I would expect you would not get both instances having a sequential number, ie two tickets on one then third on other would skip duplicates but your duplicates seem to remain sequential.

Rejiging your report showingticket closed date/time if you can, as automation is on final payment that will be most logical way to look at the progressing of the number…

If you want to PM me a backup I will take a look tomorrow if you don’t solve in the mean time.
It’s irritating me now as am not convinced it’s a big/issue and sure there is just a config error we have missed.

It’s irritating me now as am not convinced it’s a big/issue and sure there is just a config error we have missed.

I am sorry about that … it is just the fact that i am running the system for real and I cannot test as fast as I want
I am also running a restaurant which takes a lot of time, we are open 7 days a week from 6:00 am to 2:00 am.

The point of using a global program setting is that they would be using the same variable and you get a increasing number increase when either uses it?

Except in really special applications, 2 instances of a program do not share common memory space.
So it is impossible that SambaPOS run by Celia and SambaPOS run by Grecia “share” the same variable.

To share info between the 2 instances of SambaPOS, we could:

Now as I understand (but it is just a guess) Update Program Setting Action should work like that:

But apparently it is not the case.

So now from the really nice post of @QMcKay (below), the syntax (bracketed, not bracketed, server side, …) is important and you reach different element with the same “name” (variables, database values, …) so maybe my syntax is not good but that I cannot check.
I know the post below is about report but honestly I don’t know what I am doing when I write:

These are the most cryptic because documentation lacks detail and they can be different from one Report Tag to another. Uses “known short-hand syntax” as I call it. In this example, TT represents TagGroupName and SerialNumber represents the Tag itself.

Used when short-hand syntax is not available. Uses Report Field Names. Notice there are no Brackets around this, and the string is “doublequoted” instead of ‘singlequoted’

These are NEW in 5.1.62 (and IMO, the most powerful, but they also have limitations). Uses Column Names from a Database Table. Notice that the entire expression is ‘singlequoted’. The following is akin to a SQL LIKE operator, but you can use other operators as well.

Ok I think I understand and @QMcKay will be mad on me.

As he mentionned a long text ago, I have to use the current database value {SETTING:SerialNumber}, add 1 to this value, and update the new value to the database.

I am aware about the frustration I did cause, sorry for that.
Finally I understand.

Tomorrow I have to correct about 1500 tickets.

Have you tried separating the increase serial number action and the add ticket tag action into different rules. As they are both in the same rule the actions happen at the same time, they do not fire in order so you couldnt be adding the new serial number and then adding that new number as a ticket tag at the same time, the new number wont exist yet so it will use the previous stored number instead causing the duplication

Why not increase your serial number on payment processed, so remove the update ticket tag action from those rules

they are both in the same rule the actions happen at the same time, they do not fire in order

Actions are fired sequentially in a Rule, not at the same time. They are fired one after the other, in the order that they are organized in the Rule.

If the Actions fired at the same, and not in the order in which they are placed, the entire Automation system would break. It would not work.

Action ordering in a Rule is important, because the Actions are fired sequentially.

I think I heard emre say so too IIRC. something like multithread. But I never have problem with it. I always put a lot of actions in the same rule.

Action Constraints are checked simultaneously, and the Actions are short-listed to throw out Actions that fail to meet their Constraint criteria. This is why you can’t set something like a Program Setting in one Action and subsequently check the value of the same Program Setting in a Constraint in the next Action. That does not work.

However, even after short-listing the Actions, they are fired sequentially.

Thats where i got the info from, kendash, as hes always said that its what ive always believed to be true

Pretty sure I got it from emre once from a project I was working on. I could be wrong though. It’s hard to search that on forum. To clarify I did not mean it’s always that way. I was under impression there are rare times they don’t.

Ive always been under the impression for a rule;
Rule constraints obviously define if the rule triggers on specified event.
Then all action constraints are evaluated and actions short listed before any actions fire.
Then actions are run in sequence.
This often becomes the reason for splitting a rule using an execute automation command action so you can run a few actions then run a few more based on what those actions have done.
I am not sure what happens with execute automation command action if the branch of automation from it happens before the next action in that rule or if it runs in parallel but typical use is to do seperate things or last action to follow on so never had a senario where it was important.

If actions didnt happen in sequence flows like my booking setup would be buggy as it contains a create entity and update entity and if they ran asynchronously the update would not have an entity to update.

Another day in Paradise …

not working.
That is the yesterday night tickets, same thing happened, now incremented with @QMcKay [=x+1].

However it’d be nice that sombody explains me what are theses syntaxes.
These IsLocal or these GLOBAL …

One waitress is working (logged in windows, “her” SambaPOS started) - all good, SerialNumber walks one by one.

The 2nd waitress comes in (logs in windows, starts her instance of SambaPOS), starts to send orders and finally charges her first customer with the current DB SerialNumber, let’s say SerialNumber #10.

(Note 1: the first row is the SerialNumber today)
(Note 2: don’t look at the name, these are Ticket related, not Payment related and that SerialNumber is setup when Payment is made)
(Note 3: any waitresses -TU- can order for the same table; the one who settles -PU- the table receives the money and print the SerialNumber)

So in that shot your trying to set the setting name in the udate setting action using {GLOBAL SETTING:SerialNumber}
Not going to work.

It isnt really in mine either, I changed it as at the time you were still using increase.
I usually have two setting actions one for global and one for local.
Both only ‘carry’ the fields (<-- better term than variable) for setting name and value.
I only ever use update (not increase etc) and islocal is set depening on which of the two actions it is Global or Local. 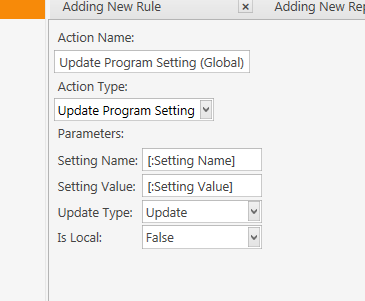 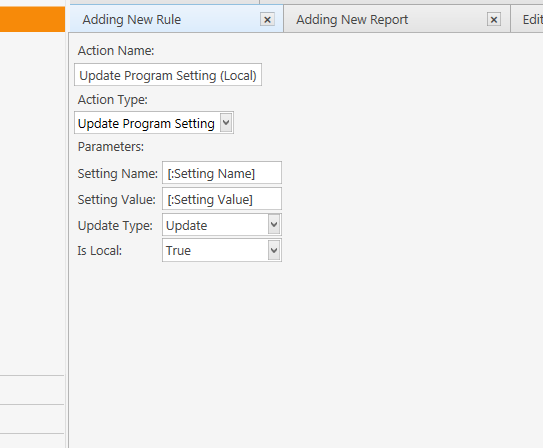 do they refer to the programming language? like local to a functions, methods, classes?; global to main?

or is it a vocabulary specific to SambaPOS? like GLOBAL means “SQL Sored”; local means “not SQL Stored”

Local, stored in memory on the Terminal (in the SambaPOS instance memory space):

Global, store in the Database:

Could be Local or Global, depending on how the Program Setting was “set”:

Both. It is up to you which you use.

Another day in Paradise …

Someone with an RDP setup needs to test this. Unless you have something wrong in your Rules, then it must be the RDP causing this. I am out of ideas.

it must be the RDP causing this

I’m using RDP, 1 server and 2 tablets. I don’t have issue but I never both tablet settle at the same time. Most of the time I use sever to settle 90% of the bill. Server has cash drawer and credit card terminal so I always use server.