Use Untag Order Action to remove all Tags belonging to a Tag Group?

Is there any way to use automation Action Untag Order to remove all Tags belonging to a particular Order Tag Group?

The idea is that I don’t know which Tags are selected, but I want to remove them all from the Order.

I tried * as a Tag Value, but it does not work. 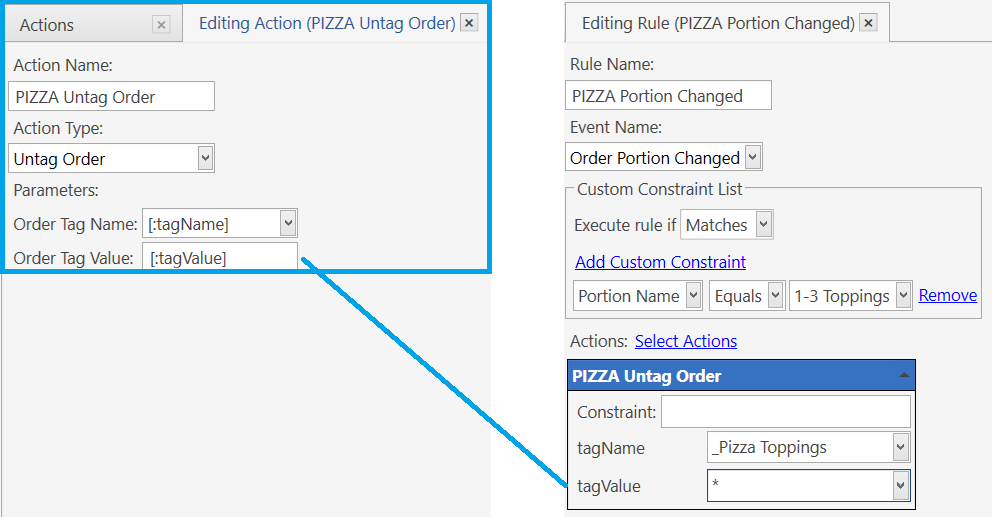 Looks doable. Would be much simpler to implement though if there was a way to remove all Tags of a Group using something like * as a Tag Value 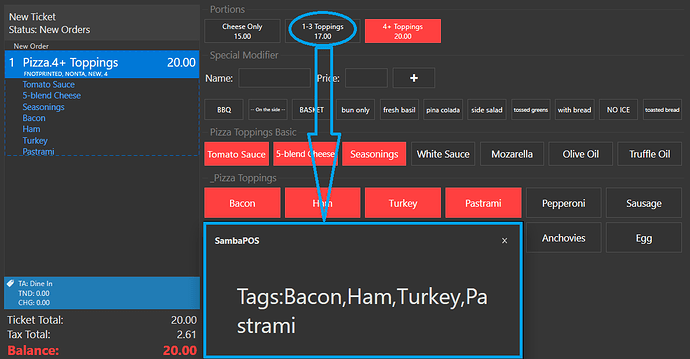 I am trying to constrain the number of Toppings for a Pizza via the Portion.

It works ok if I select the 1-3 Toppings Portion and begin Tagging. It will stop at 3 toppings and allow no more.

But if I select the 4+ Toppings Portion, then do Tag selection, it allows for unlimited Tag Quantity, which is fine.

But if I then switch back to 1-3 Toppings, all the Tags remain from the 4+ Portion, which overcomes the “3” limit. So I want to remove all the Tags when the Portion changes to prevent this.

order tag Jason it may overwrite it with empty tag value

I will take a look at Order Tag JSON … you might be correct on that it might override the Tags.

LOL, that might work pretty good too - thanks for the suggestion!

BTW, IIRC when using update order it seem the value on screen does not update even using display ticket. I need to add order then cancel or select unselect I think.

So, it may seem not working.

I remember a strange bug like that in .61 Beta, but it should be fixed.

I am not using Update Order Action. I am using: 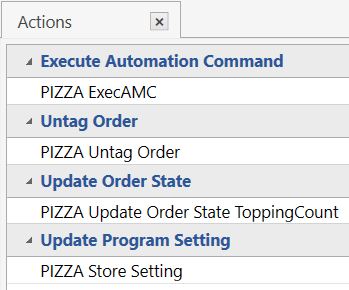 Using {ORDER TAG LIST:X} and Loop Values Action to remove all Order Tags from the “Pizza Toppings” Tag Group when the Portion changes to “1-3 Toppings” …

can you show the rule and action behind this gif so i can have a look at the syntax.
Thanks very much!

It will be a message action on an order tagged rule.

Actually was more interested in the action that executes on portion change. Am trying to do something similar and can’t get the syntax right.

Here is a DB Tools Import file containing all the Rules and Actions. Everything is prefixed with the word PIZZA.

The basic idea is that it keeps count of the number of Order Tags from a specific Order Tag Group, and if that count exceeds a certain value based on the selected Portion, then it disallows adding more Tags.

It also monitors the Order Portion Changed Event and when that is triggered, it fires a Loop Values Action which in turn triggers the Value Looped Event to Untag the Order for a specific Order Tag Group.

Hi @QMcKay, thanks heaps. I was able to use part of your solution to resolve the bug I had in my POS.