Where to draw the rest ammonut

Hi out there.
When I make a cash payment on half the ammount i like it to remember the rest ammount. This example I have a total on 2760 but customer 1 only pay the 300. Other customers will pay the rest. But SambaPOS automatikly makes the rest ammount on Faktura. How and where do I change that? 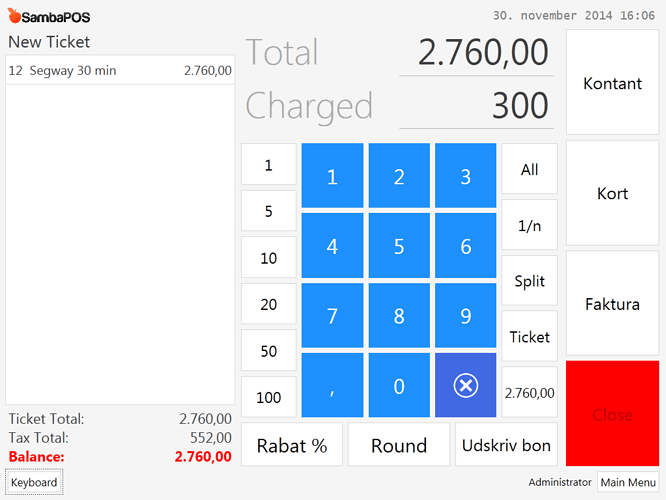 It shouldn’t behave this way. Can you explain more? You have edited payment types did you do anything other than rename them?

I can try Kendash. Thanks for the fast reply

I think it is after I made the Faktura(invoice) button.
That buttun is for making a invoice instead og payment on card or cash.
So I think it have something to do with that. Dont know how to explain it more in details. is this making any sence for you?

It makes sense but if you share how you configured it we might be able to help more.

I think so also. But I think it is dificult to find all the windows that I have made. Is there a manual of how to make new buttons and how the program is working. I mean what do I have to do first for making a new button. And how the whole projedure is for setting up the system. That i think is verry confusing. For SambaPOS can EVERYTHING but again difficult to manage i think. Hope you understand my english

Then the translation is also not easy. But I try here. Bare over with me please… That is also why i dont know if the cooming screen shot is in the right order. 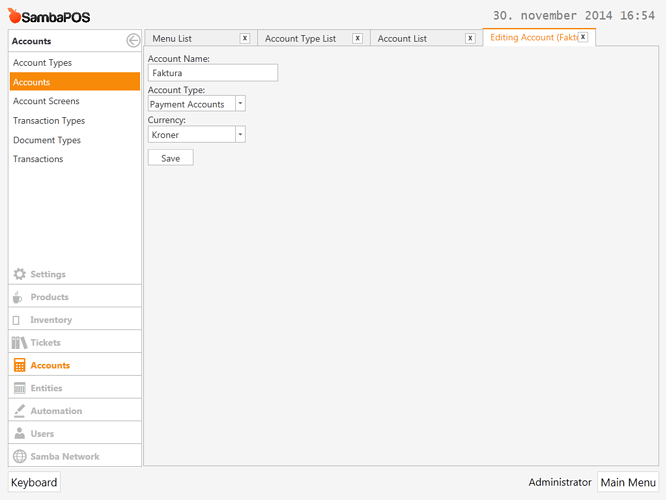 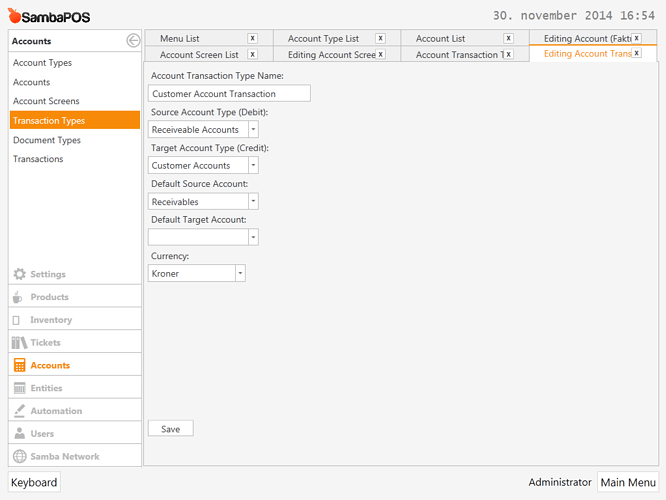 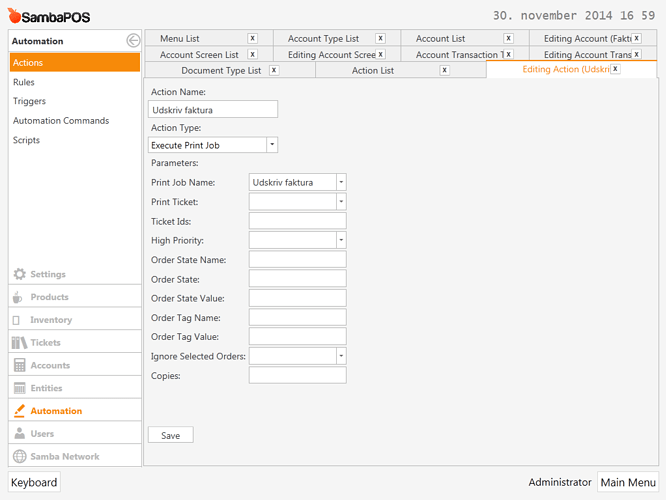 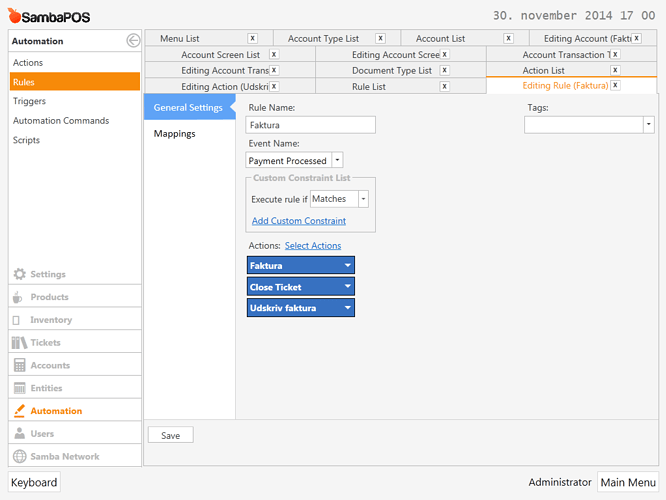 Can you see anything out of this???

The last screenshot what action is Faktura?

This is unrelated but do you use multiple currencies?

You are fast. Nice. I like that!!!
no I only use kroner 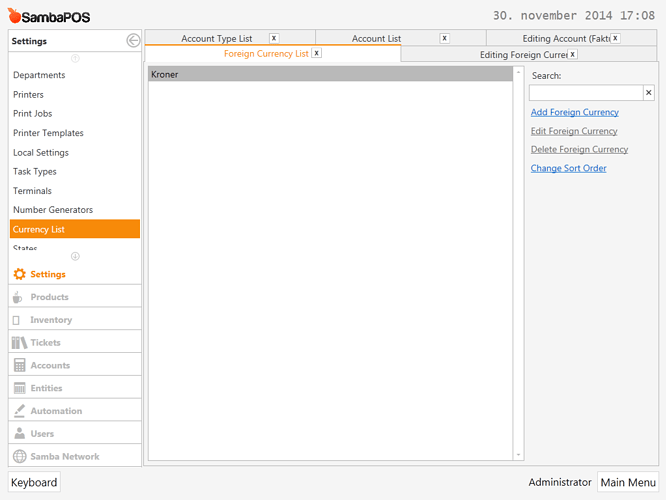 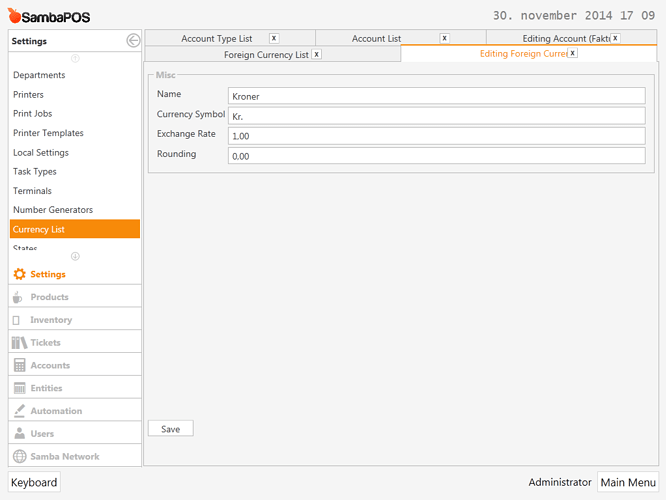 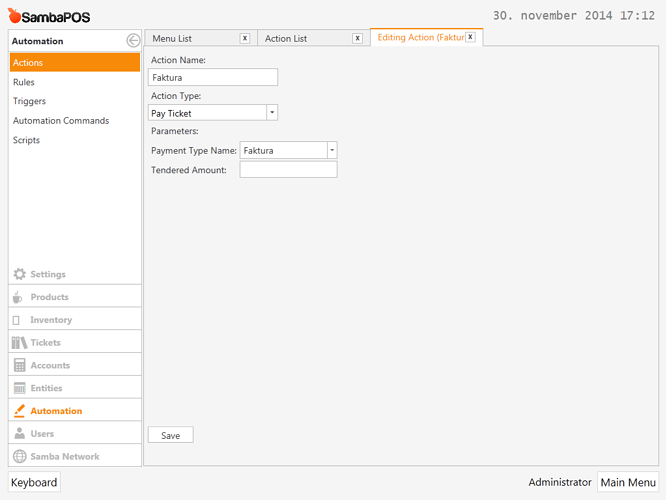 So you mean i must delete currenci kroner this one

Yes but this will not fix your problem. It will fix future issues. Your problem with the invoice probably has to do with the payment processed rule.

Ok your issue is your forcing payment again on payment processed. You do not need that action in your rule. Take it out.

Edit: yes delete that currency you do not need it and it will mess things up.

Okay I have removed the currenci.
Then you mean I have to delete the whole Faktura rule here 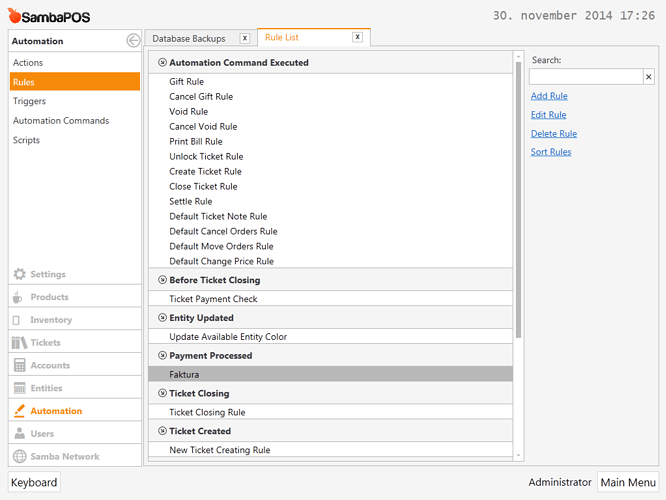 Not the rule just take the Action Faktura out of your rule. If you do not want it closing automatically on split payments or printing the invoice before entire ticket is paid you need add a Custom Constraint like Remaining Amount Equals 0

Example of the constraint: 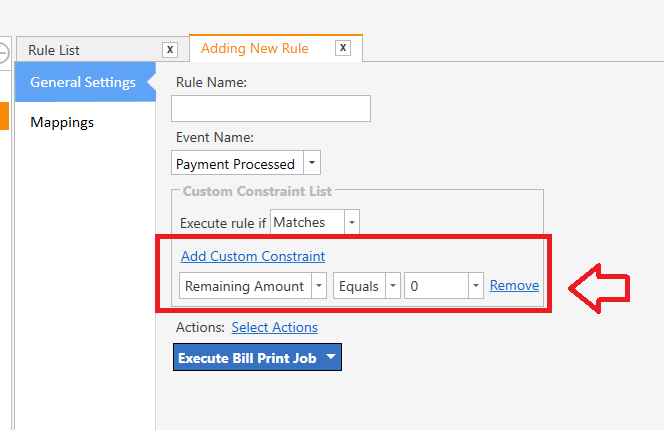 Thanks a lot. Now it work Thanks to you.
Were and how do I activate/buy the Database backup.

go to www.sambamarket.com create an account purchase it then start SambaPOS go to marketplace login in upper right corner and activate/install the modules.

Thanks a lot. Now that also work.
Were do I change the text for the green fields so it only have to lines? And is that possible to change for 2 lines in the orange buttons also? 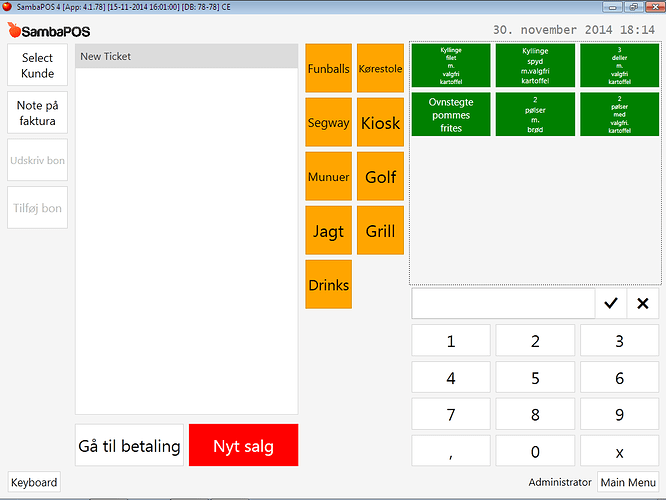 Go to Products/Menu choose Edit all Categories and play around with settings there… Wrap text may work. If your asking about the buttons them self then you would change how many rows and columns from the same screen. 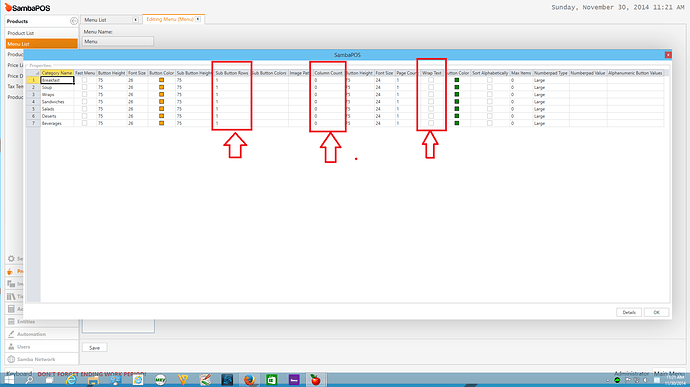 Turn off Wrap Text in Categories, then use \r to insert line-wraps at the desired position(s).

Exactly what i needed. Thanks.
Now the lines are to long for the ticket printer. Were do I make more lines on the printer reciept?

Okay. But Will that print on two Lines instead of only one half line.
Then I like to ask you if there is a APP for iPad/iPhones were we can make the ticket and send it to the bar or kitchen printer?