Ability to choose any printer on any system

Wanting to know if it was possible to link printer name based on terminal on client systems rather than having to name them exactly the same just for it to work on a network related instance.

Currently if you have multiple clients connected to a database , for printers you have to name them exactly the same name on each individual client, and 1 small mistake on one client can disrupt all other clients printer names, causing printing to not work on any client except the one the change was made on. And only way to fix it is to name all.of them exactly the same.

By been able to map a printer to system regardless of name allows for redundancy. So in case 1 printer doesn’t work or respond on any system, then we could share printer with other systems and map their printer name to networked or shared printers. It helps to redirect all print outs in case 1 printer decides to fail and not work, we can redirect it to another from client settings without affecting any other printer name on other clients

You can install the printer as a network printer with its drivers into the local machine, name it whatever you want and just select it in dropdown in sambapos.

By printer name are you referring to this: 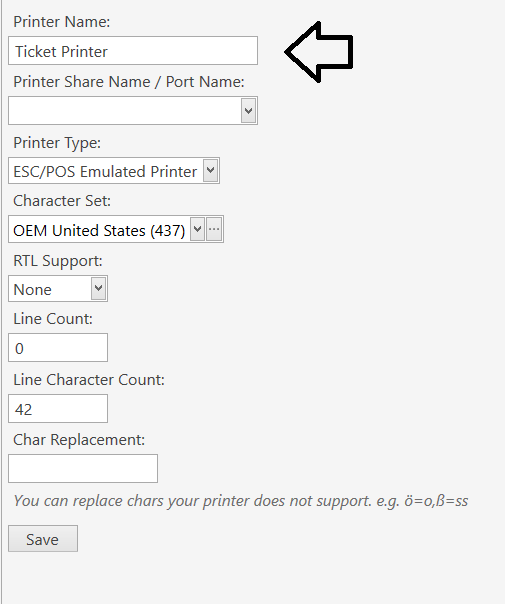 Hey @Shivan - hope things are good for you.

I not sure if it is relevant BUT:
I stubble across maybe a hidden feature in SambaPOS when using a Printer that had a similar name i.e.
Samsung Copier
Samsung Copier Series II

I think I reference “Samsung Copier” as the name in Printer - guess what I was being presented with a Printer Selection Dialogue box?

If you have a printer share name on server system as ‘receiptPOS1’ and on client you put ‘receiptPOS2’ what happens is that it will print to one but not the other, because samba looks at the printer share name, and they must exactly match each other for it to work. They cannot have unique names.

So if I have a printer at let’s say IP address 192.168.1.3 and I install network printer on both systems, and on one system make the print share name same as the one shown on that system, if the name is different on any other system connected to the server, then non of them will print, because the database updates the print share name on all the other connected clients to be exactly the same name as the one it got setup with. And if none of the other clients have the exact same names, then they simply won’t print.

I know you can configure each printer, and since samba just looks for the name, it will print to it if the name is the same regardless of whether the printer is local or networked.

let’s say the counter pos printer stops working, I want to route all prints to counter 2, the only way to do this is exiting samba, making a new printer or editing the printer IP address to the other counter printer. The other way is having another printer installed with a different name for redundancy, so in case if main printer does go down, I can just use samba to allocate the other printer. The problem with that is that it has a different name, and if I change it on one machine, it will change on all machines, causing all machines except the one I just configured to not work.

Am I making sense?

@paul. Hey Paul, apologies that we never got a chance to meet yet. Hope we do one day. The issue isn’t that it cannot find the printer in the dialogue, its that if you share a printer on a network for example or name it something different to what it is on another client system on the network. Due to using the same database, with only the difference of terminal settings in the database, samba won’t keep that printer share name unique to terminal, it will change all client systems to the same name it was changed changed to.