Here is a big issue we are having in Australia - we need more filters and in particular a custom Filter or Fiscal Year Filter i.e. 1st July to 20th June next year: 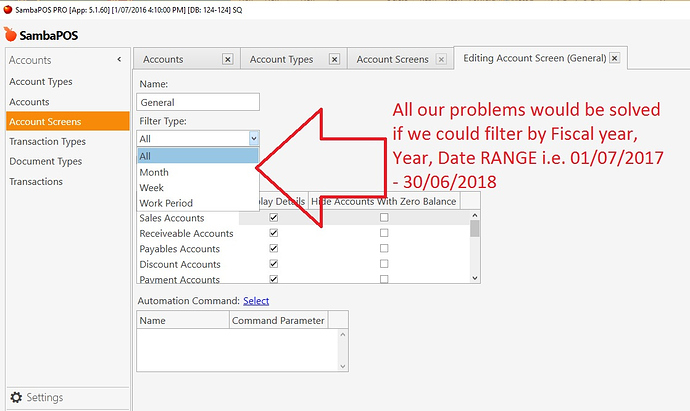 So I guess you decided not to use reports for this afterall?

Well the thing is @Jesse we are trying to launch this out to 100+ sites and adding a few more filters would solve lots of issues, one being time…

I rolled our first SambaPOS site over yesterday that DB is over 450MG in size after it is backed up. The SambaPOS backup routine fails as reported previously so we require to use SQL Manager which does not prepare the backup in a form that is readily available import in Samba. The site Sales are over $700,000.00 just in one area as this is a small POS so the Accountant immediately asked “do I really need to keep seeing this figure as I will have no visual idea to see how we are travelling compared to last year?..”

Custom filters would allow us to create Fiscal Account Screens every year.

I would say giving what Emre is doing it would be faster to build reports than wait for a feature. I doubt we see him any time soon.

Yes I thought about that but if he is working on something then this would be a worth while consideration in the build. So I thought to put it out there just in case…

Hey I like what you did to your place, looks real cool. The Clubs we deal with look no where close to your place but they do come to drink after (and during) a golf game!

We are about to switch to full service menu instead of order at counter. Also about to add full breakfast. Looking to add another $1000 per day with breakfast.

So far we have grown sales by 40% since the remodel… it has paid for itself fast. Opening up the dining room made a huge difference. Our eat in atmosphere has completely changed. Getting people from surrounding cities and towns now.