hi i’ve just taken over managing the sambapos for the company i work for but the former manager didn’t leave any direction as to whatt they have done. They created a close and send ticket button on the payment screen, which i now need to replicate on a new sub menu but i cant seem to see how it has been done.
and i was also wondering weather i could lock a till to a certain menu or screen as i only want to be able to access entrance prices one the reception til and not have the food menu available

Think we could do with a bit more info on the workflow of the setup.

Close and send ticket? send where, you have a kitchen printer or something similer?

Well considering we dont know what he did either… its going to be hard to get direction from us unless you can tell us more about it. Screenshots would be great.

You have an advantage that you can see the system in front of you… we cant we only know what you tell us… and the information you gave us is very vague so please understand why its hard for us to give you direction right now.

here is a screen of the button im trying to add it’s the send and close ticket in red it wouldn’t let me add a screen before. 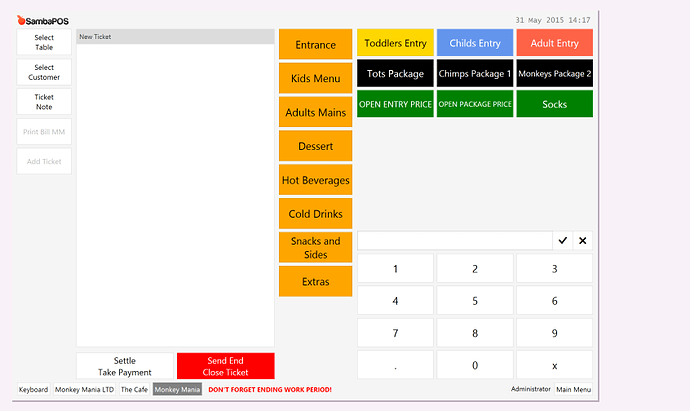 Ok, and you need to replicate that where?

IT looks like that button is just a renamed default close button.

he wants to replicate it on a sub-menu but not sure what he means by that?

sub menu is a specific term in Sambapos. Can you clarify what you mean by submenu?

i need to replicate it onto a new category but when i create a new menu or category i just get the settle button. do i need to create the button and then add it to the screen?

no, that close button is not part of the menu, its an automation command.
it must have a mapping set to just be for that menu, (you cant map catagory so not sure about that, may be your terminology)
Can you find the automation command list? and find one that has a button header of Send End Close Ticket and upload a screenshot of its mapping settings? 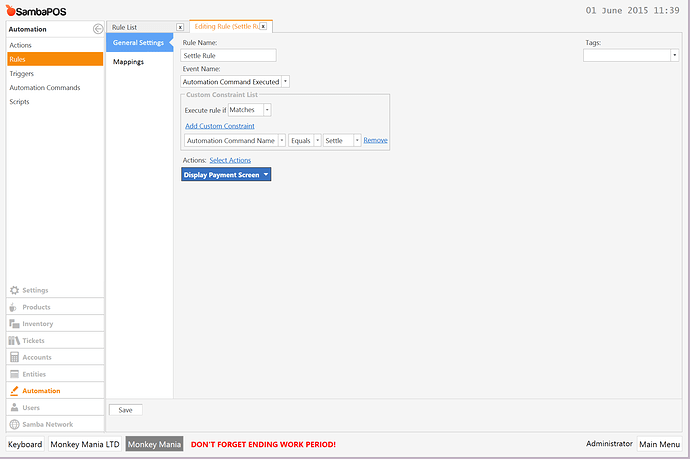 That will be the settle button rule.

Thought you were looking for the send/close button?

Where were you looking to duplicate it to?

@sebgedge its obvious we have some terminology issues here. You said:

They created a close and send ticket button on the payment screen, which i now need to replicate on a new sub menu but i cant seem to see how it has been done.

But the screenshot you just showed is for the Settle button and does not make any sense at all compared to what you have requested. Can you start over from the start and demonstrate with clear screenshots what your wanting because I thought I understood but now you have confused it even more.

it’s how the manager programmed it before me the second screen shot says settle but it’s creating the send end close ticket button im not sure why they did it this way however. 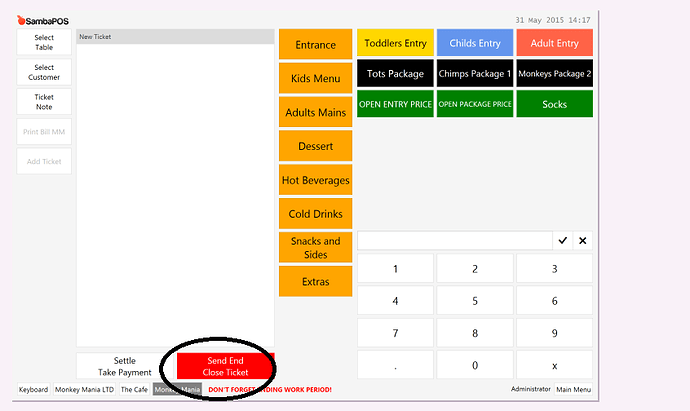 I really think your getting yourself confused…

Looks like the default close button renamed, check your auto command buttons for close, and you probably find the header for the close button is send end close ticket

What happens when you press it? It entity ot ticket tag assigned it should just close the ticket

i am confused you are right, as i changed the mapping of the settle rule to include the terminal i wanted to use and the send end close button appeared where i needed it to be. Here is a screen of all the automation commands there are on my system hopefully this will clear it up. As to what happens when i press it it just clear the ticket if there was an error or we need to send and order through before payment is taken. 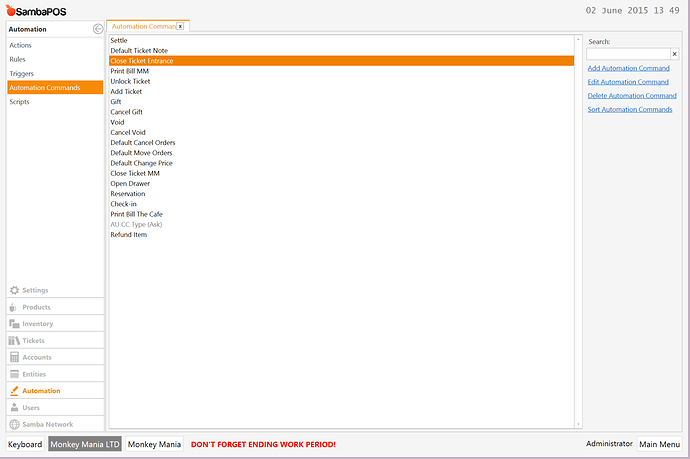 With all due respect I think you need to familiarise yourself a little more with how samba works.

Its hard to say exactly what happens in your setup if its already been customized before your use but the default buttons would be;
Close -> by default close is only posible when a table or customer entity is allocated to that ticket, then on pressing it would submit the ticket to the database, change status to unpaid and close the ticket.
Settle -> would just show the payment screen at which point once payment was made the ticket would be closed the balance is covered.