Version 4 looks great, just went live and all is well!

I’m having an issue with how tickets are added to tables. In version 2.99 if I added an item to a ticket, then selected a table it would automatically merge the item to the existing ticket. In v4 it seems to keep separate tickets, which I can understand is helpful for some applications, but now ours. Is there a way to disable this feature? As a work around I open the table/ticket first, then add items, but this adds significant time in our fast paced bar setting with up to five users on two terminals.

Second question, how do I make it so the ticket automatically closes after selecting the table [select item, select table, auto-close ticket]? It worked like that in v2.99 and it makes it easier for us. I assume I just have to add “close ticket” to an automation command, but a i tried a couple to no avail.

V2 was a great solution, but design limitations prevented V2 from going any further.
This is why V3 & V4 were created.

The logic behind the separate tickets is that you can select a Customer and then add them to a table with their own tickets. The same principle if you move a Ticket to another Table.

The natural way to use Tables is to select the Table first, then add orders which keeps only one ticket. Is there any reason why you open at the Create Ticket screen instead of Select Entity ?

To automatically close a after a Table is selected, use the following Rule. 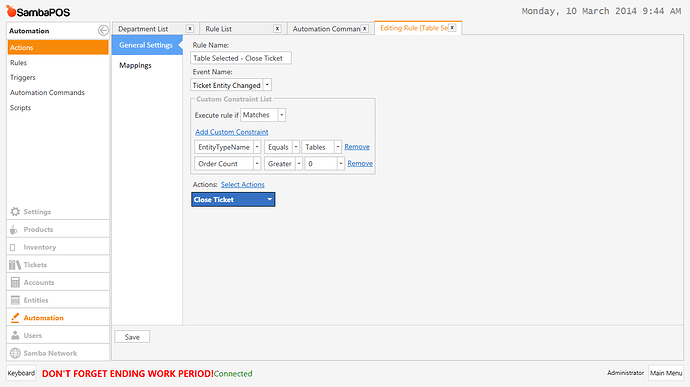 Thanks for the response! The way it’s programmed makes total sense to me. We prefer to have the create ticket screen as our default since we do a large amount of our business as retail without tables, and from the Create Ticket screen it’s less key strokes to merge the ticket to a table compared to opening the table entity screen first (and less strokes makes a difference in our bar setting). We’ve been opening tables first since going live last week, it’s just a few strokes longer so I figured I’d check for a more permanent solution. But I’m loving v4 in every other way! Thank you for the rule, that helps! -p

I just started using auto logout, and when combined with this rule the program hits a bug. The menu bar along the bottom disappears, does not logout, and freezes the program. Any suggestions?

This is a screen switch issue, you have actually been logged out but instead of the log in screen apprearing you get the pos screen with missing buttons

Can you describe in detail, with screenshots if you can, what exactly it is you are doing so @emre can see what might be causing it

I just started using auto logout, and when combined with this rule the program hits a bug.

How did you combine it with this rule? Is it logging out by using an action?

I have tried the auto logout with both an action and the terminal setting, both produce the same result. I will post screen shots this weekend. Thanks for the input

Typically it does this when a ticket I still loaded

Okay, that makes sense. With the rule above I simply added the logout action. Perhaps the ticket does not properly close first for some reason? Which would also explain why the terminal auto logout fails, the ticket is not closing. Is there another way to accomplish what this rule aims for, that is closing a ticket when it is assigned to an entity, a table in this case?

It can definitely be done as i have a park sale rule and the ticket can only be closed if an entity is assigned, also is this how the default setup works? Assign an entity, add orders and press submit, this then closes the ticket??

Thats a few ways i have it setuo so what you want with assigning an entity, closing the ticket and auto logging out can definitely be done

What I am saying is it may be logging out before the close process is completed. When I get home if you have not figured it out I will help you look into it.

I had an issue where the screen switch issue occured when i was applying the staff entity that also auomatically added that member of staffs discount to the ticket. Everything worked fine staff entity added, discount calculation added, remainjng balance paid and autologged out

It stopped working if staff discount was for 100% thats when i got the screen switch issue, emre said this was an issue with entities and was looking to see if anything could be changed without affecting othe user. To fix this myself i changed my rules so that entering the staff employee number into the keypad (manually typing, swiping card or scanning barcode) would just load the staff entity and NOT AUTOMATICALLY apply the discount. Then when i keyed, swiped or scanned the employee number the discount was added and the ticket closed and logged out

Btw @RickH why don’t you just make a rule to log out after Ticket Closed event. This would cover all your situations with one rule?

Simply map it not to run on a specific admin account that you use to look at ticket explorer.

Good practice is to look at it as a whole. You will make less mistakes etc. Everything has a flow.

Btw sorry little off topic but the autoprint I made has changed if you look at the file I uploaded to the prebuilt forum its much simpler and dynamic now. One rule one action. It may not fit yours exactly but you could look at what I did and apply that logic

Yea thats what i was doing at first setting everything to work as an admin user logged in, ive started to change that to keep admin separate so i dont lock myself out again haha

Thanks for the help. I’ve looked at every rule that could be effecting it but can’t figure it out. So it goes.