After install sambapos v4 what next for server and client

Something you should understand about RDP. To get RDP to work with more than 1 terminal at a time you have to run a Windows Server operating system and you have to purchase licenses for each terminal. This can get very expensive.

Its best to just run two Windows Machines and hook each one to the database and run with Wired Ethernet. You already said both your machines are Windows 7 machines so your all set. Just follow the tutorials I mentioned and you will be fine.

If using tablets in the future interest you then I suggest investing in some Windows Tablets not android or apple. Windows tablets can connect to the database with a local install of SambaPOS. Apple or Android tablets will not let you install SambaPOS locally so you are forced to use RDP and like I said RDP is very expensive.

i will work on it, thank you so much for your advice and i really appreciate.

Its best to just run two Windows Machines and hook each one to the database and run with Wired Ethernet.

I heard people started to wire their ipad’s

I already follow your step tutorial, everything done for server but after install sambapos v4 on client PC then i go to ‘Local Setting’ then type server name address at Client PC on ‘Connection String’ Box but notification appear as per attached 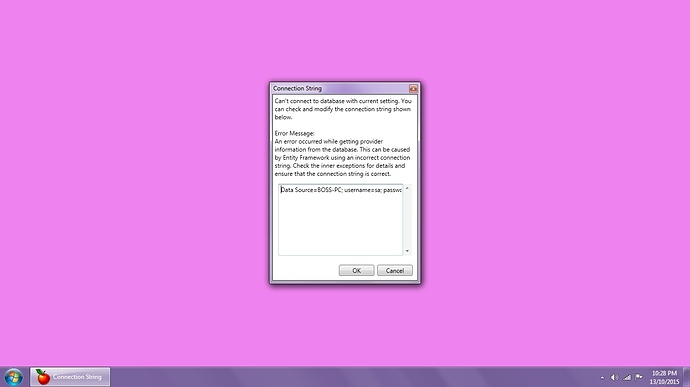 what should i do? please advice

You can correct connection string in this error dialog, click OK and restart SambaPOS. If you believe if it is already correct this document will help solving the issue.

You have no instance name in your string. Read what Emre showed you and be sure your connection string is setup correct. The screenshot shows it’s not setup correctly due to missing instance.

ok, if server done what should i do on client PC. i mean step by step for client PC configuration

Fix your connection string it’s wrong. Your missing SQL instance name after server name. It might look like this:

that is my Data Source portion of my string… look at yours and how its different:

What is missing from yours?

Find the SQL instance name and insert it after your server name like \instancename;

can you fix for me through team viewer, if possible

Team Viewer doesnt help others that might be watching the conversation. Lets work it out here. Show a screenshot of your servers connection string.

Also its best if you learn your mistake so you dont make it again. I prefer to help you figure it out so you dont require someone to fix for you. This will make you a stronger business owner and give you less costs in future. 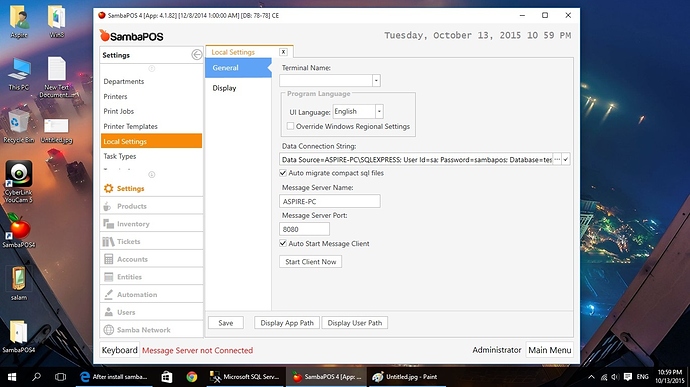 Is that the server PC?

this is server PC, is that correct my setting on sambapos4? the instance name as your mention I already rename but the issue still the same

Please advice me for client PC configuration, step by step…

So you have a working connection string for SambaPOS running on your Server right? Why don’t you just copy it to the terminal?

Considering it says CE at top I worry he doesn’t have a working string. It is hard to tell with the information he is giving its like trying to find a surprise.