Do you Prefer All-In-One POS or PC-Based Systems for installing sambapos?
When I researched for All-In-One POS In Saudi market I found them really with low specs … most of them are core 2 duo with 4 G Ram (posiflex and other brands ).

All in One pos hardware looks nice and good for presentation, but now the issue is if the machine gets a problem then you are in trouble.

On the other hand for Pc based u can easily swipe and repair the hardware even on your own.

All in one systems are built for use in a restaurant or bar environment - many are waterproof and dustproof so if you spill something on them, just wipe it off and no damage to the system.

I found them really with low specs

It’s true that a lot of the all in one systems are quite low spec in comparison to standard business/consumer PCs and laptops. The reason being is POS software generally does not need high powered CPUs or lots of RAM to operate, and also the manufacturers tend to favor reliability and durability (waterproof, etc.) over having the latest, fastest hardware. It’s also not uncommon for hardware manufacturers to be providing 2 or 3 year warranty with the purchase of such systems, pretty much unheard of (unless at extra cost) for standard business/consumer PCs.

but now the issue is if the machine gets a problem then you are in trouble.

Most branded all in one systems are easily maintainable, so if a hard drive fails it’s easy to swap out and replace (in many cases, easier than on a standard PC). Of course if the motherboard fails that’s a different matter, but your average user isn’t going to be swapping out anything more than a hard drive usually.

For me, as our company provides POS solutions, we always recommend all in one systems unless a customer wants a specifically high spec PC. Reason is, they are actually far more reliable in the type of environment they are used (I have actually never had one fail other than user created damage). And for us, since we have an ongoing relationship with our customer, if anything does happen, it is very easy and fast for us to fix or even if need be have the hardware supplier fix.

Thanks wisefix for your reply .

Buying a “real server” is definitely unnecessary, unless you are talking about running a large number of terminals off it.

My first question would be, how many terminals and tablets do you intend to use?

If it is just a couple terminals and a few Windows tablets, I suggest you designate your main terminal to store SQL Server 2014 as well as running SambaPOS, then all other terminals link to the database there. Of course, that main terminal needs to be on all the time for others to work. If you prefer having a designated “server”, then the solution you suggest is fine. It also does have the added benefit that you can have it out of the way and configure UPS and backup on the “server” machine for maximum reliability. But of course, this means the total cost of your setup is higher.

Sambapos and SQL express 2014 uses very small amount resources. You don’t need enterprise or gaming computer specs to run it. Most people would be surprised just how efficient it can be.

The only real upgrade that I feel is worth investing is really good SSD drives.

As you may have seen in my other posts I prefer separates setups.

If your very tight on space or have a very open bar with tills open on front counter all in ones are likely to be more attractive however cost and maintenance is better on separates.
You also generally get more ‘bang for you buck’ on specs on separates.

I use USFF Dell Optiplex machines with spec of Core 2 Duo, usually 3Ghz with 4GB RAM and 60GB SSD for terminals and a SFF Dell with RAID and 4-8GB RAM if intending to run more than 4-5 terminals/tablets etc.
I wont go in to much detail on price but if you are tech savey enough to put separates system together yourself your likely to save well over 50% on an equivalent used all in one system.
From experience I try my best to avoid used all in one systems.

As mark said all in ones will generally always have been used as a epos machine and although are usually better for liquid resistance etc they will have had alot more exposure to them than a USFF machine which mine usually come from office clearance/liquidations/upgrades.

This is what a tipical system is like that I put together and sell; 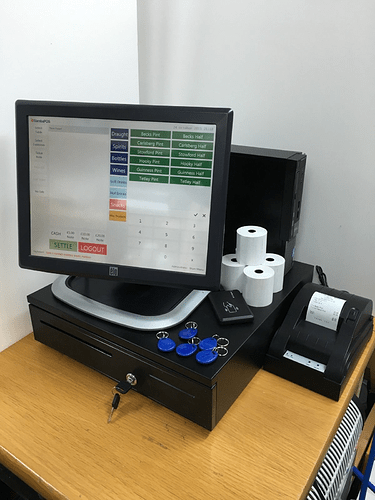 As mark said all in ones will generally always have been used as a epos machine and although are usually better for liquid resistance etc they will have had alot more exposure to them than a USFF machine which mine usually come from office clearance/liquidations/upgrades.

Also in my experience, I have found (used) all-in-one terminals to be
a) as expensive as a modular/separate system
b) unable to update them to windows 7/8/10 due to driver issues…manufacturer’s of them don’t seem to like to update, probably to force people to buy a new terminal instead!

unable to update them to windows 7/8/10 due to driver issues…manufacturer’s of them don’t seem to like to update, probably to force people to buy a new terminal instead!

I guess that depends on manufacturer. I’ve never experienced this myself, can get all drivers as needed. I usually work with Partner Tech or EC Line systems.

My own tills was Toshiba sta10s…no drivers for anything above windows xp… Mainly the touch screen I’m on about.

My own tills was Toshiba sta10s

Yeah that’s a discontinued and pretty poor product - used a VIA C7 CPU instead of the more common Intel variety. However it was very popular in the past. Unfortunately there isn’t much can do about it if a product is discontinued.

But I have seen people using Windows 7 on them, so it must be possible. I wouldn’t think they will handle anything above that though.

Screen wise its always worth trying the elo driver and the egalaxy driver.
Know allot of screens use these brands for touch and am yet to use a screen which doesnt use/work with one of these two drivers.

Yeh, the sta10 was actually the first toshiba to use an ELO touchscreen, already tried all the ELO drivers sadly. Ended up just having to run samba v3. Never knew about the egalaxy driver though!

At the moment I’m running one samba v4 on the main till and samba 3 on the 2nd (it’s barely used). However after playing around with v5 for the last month on my laptop i definately want to upgrade.
Anyone got recommendations on decent touchscreens? Struggling to find any new ones for less than £200. Planning on getting some Dell/HPs and putting an SSD in to finally make a rugged solution.

I prefer tablets honestly. You can find tablet mounts that make them operate just like a pc/touchscreen setup. Windows tablets are cheap and perform very well.

Never really put much thought into that before. What size tablet do you use? Do you find it OK with samba?. Only asking as my dad is over 60 and needs reading glasses even on his phone, so that was why i was originally thinking of maybe buying a separate 19" monitor.

IIRC, I think you have a surface pro?

I currently use a 12" tablet You can even buy bigger 19" tablets. Yes I use a Surface Pro. There are certainly much cheaper and probably better tablets for the money though.

Yes Man SSD drives this is what I was thinking about

Do you mean to use windows tablets instead of a laptop or all in one pos terminal ?
Thanks

Thank you Guys all for your help