So I feel this is an issue mainly due to the fact of the proliferation of Tablet usage. Due to the fact I have several Entities I would like to UNMAP the default buttons from the TABLETS. Having the “Entity Screens” “unmapped” only disables the button and does not Hide it?

[EDIT] I should mention my Ticket Buttons are running off the screen for Tablets.

This is what Enities Screens do: 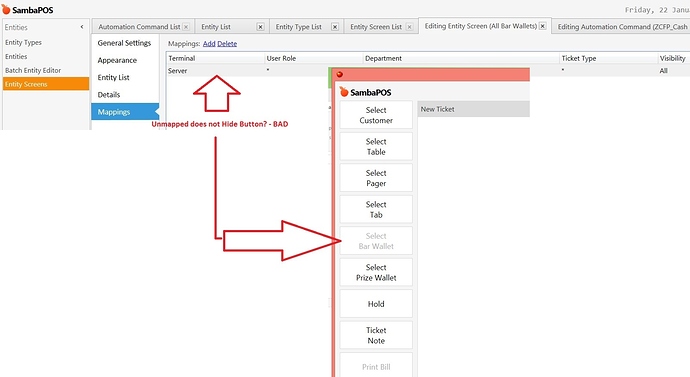 Automation button, HOWEVER, do work and hide as shown below (setup only).

@emre can you look into this please?

I know these Entity Screens can be mapped to Automation Buttons and a Change Entity Rule could be used to “pop” the Select Entity screen BUT - as my previous posts (unanswered) highlights using this method does not work as expected. The problem is CLOSE from these “Search Screens” in some cases return you to the Main Menu.

Have not tested un-mapping USERS from Entity Screens should expect the same issue…
Comments welcome.

PS: Access to System Settings i.e. [SETTING:x] would be great as we could configure “Site Customizations” like - No Tables or No Pages or No Bar Wallets.

To remove those buttons you remove this:

This means you must fully automate the process of going to Entity Screen and Selecting appropriate entities and assigning them to ticket. The way these buttons work is not a SambaPOS issue it is a feature and it was designed to make automation simpler but you can still automate it yourself if you do not like the buttons.

BTW Issue category is if its a software issue something not working. Features or suggestions to change features should be in request category. There is nothing broken about how these screens work so you should probably redesign your request and make it a Request topic. Be very clear about what your requesting changed and why.

So basically what your asking is for the default behavior of the currently working Entity screen behavior which is tied to tickets be changed so Close when inside an account goes back to a ticket? Start from beginning what steps did you take to get to that screen and what are you expecting happen when you press close?

I had to piece my understanding of your request together by looking up previous discussions you had but it would be better if you explained in full what you did and what behavior you would like to see. Show screenshots and illustrate your flow.

State mapping is for mapping to states but your requesting the ability for it to map to a Setting? How would this work? I mean its not using expression evaluation there its just simply mapping to states…

The problem is CLOSE from these “Search Screens” in some cases return you to the Main Menu.

Perhaps you should store ticket somewhere and then build your own close button that loads that ticket.

Sorry Kendash you caught me catching up on some sleep.

The way these buttons work is not a SambaPOS issue it is a feature and it was designed to make automation simpler but you can still automate it yourself if you do not like the buttons.

I understand all that above but Automation Buttons work differently whereas they get hidden. I felt if the button is unuavailble then why show it to the User? In Aust. all new POS installs are using Tablets (the In thing), so I need the screen real estate as my Ticket Buttons are dropping off the screen.

BTW Issue category is if its a software issue something not working.

To be honest I was getting frustrated at some of the basis stuff not working as desired. You have answered my question, however, which is great so I can move on. Topic has now been made a Question.

I thought my previous unanswered question demonstrated what was desired. To further add, however, it go goes towards trying to get Basic stuff working without going to full automation. Most of the basic works really well I am just trying to “twink” a few things to get it smooth.

How would this work?

Well I was trying to avoid creating States for just about everything to hide/enable Buttons. For example to get rewards points working I used a new state called accrued to then show a automation button to convert points to dollars.

What I further want is the ability to turn the entire reward system off by simply setting a variable. SETTING:RewardYN
and being able to test this during automation or more so Enable/Disaable buttons.