I remember a while back we implemented Reservations using a tutorial on the forum, which used PreOrders. I believe it was this one, or something similar:

Since then, I have never really used the feature as I feel it is not ideal given you cannot set a date / time for the reservation. For anyone who wanted reservations, we just used the open source mySeat either hosted on our server or installed locally.

Ideally I would need to track number of tables booked / people for a specific time slot on a given date. Similar like how mySeat does it.

Yes it does but nobody really attempted it. Google calendar API would be great idea so would state logging. It’s up to you how you store the information and Google API can help assign dates to that. I really don’t see a reason why you couldn’t design a system for seeing the reservation info using a combination of Google API and Sambapos features.

Was just trying to work out a better simple reservation system for the hotel.
Main aim being keeping a ticket open to associate the room to the table they have booked ready before service.
Ie. selected room 1, select table 2, mark reserved. ticket stayes open so when the waitress starts taking order they just select table and room entity will already be selected.
As this would be applied before dinner service begins there will be no orders…
Are we able to keep an empty ticket open.
Have bypassed the ticket closing and before ticket closing rules with state based constrains but 0 orders doesn’t hold (not saying I don’t understand why just if anyone has a solution?
Looking at ticket list and database doesn’t look like the ticket is registered at all so much be a hard coded ignore ticket is empty which we cant get around with rules/states etc.
Unless I missed something.

OK, Have put together a solution for now… is a little messy but should to the job.
Video coming.
Pretty much am adding a dummy product and void it but use my ‘Althernate Slim Orser State Formatting’ flow to make it just look like a reservation note rather than an order and beside my existing flow implement a KeepOpen=True state.
Also set dual triggered rule for cancel reservation button and new order added while ticket status = reservation which changes the states and also switches it to a ‘Hidden’ format.

On a separate note.
@emre could you check if Strikethrough is somehow hard coded to Void or some other order setting?
I do not have a state defined for void and my FReservation state is; 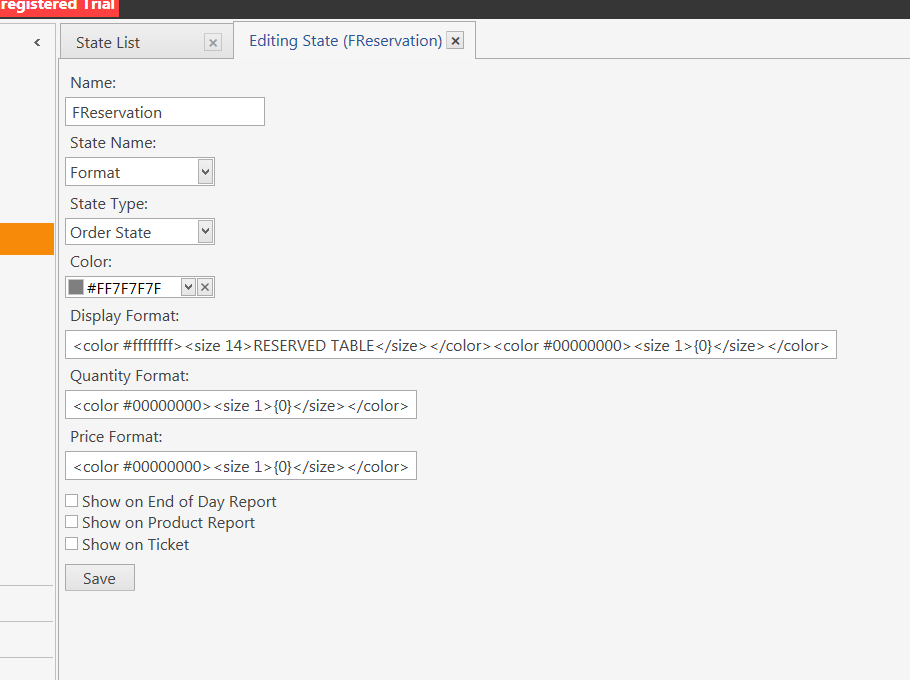 Void is almost certainly hard-coded to contain the strike-through. I tried to override by creating/modifying a Void State (Orders) and set the format to not include <s>{0}</s>. 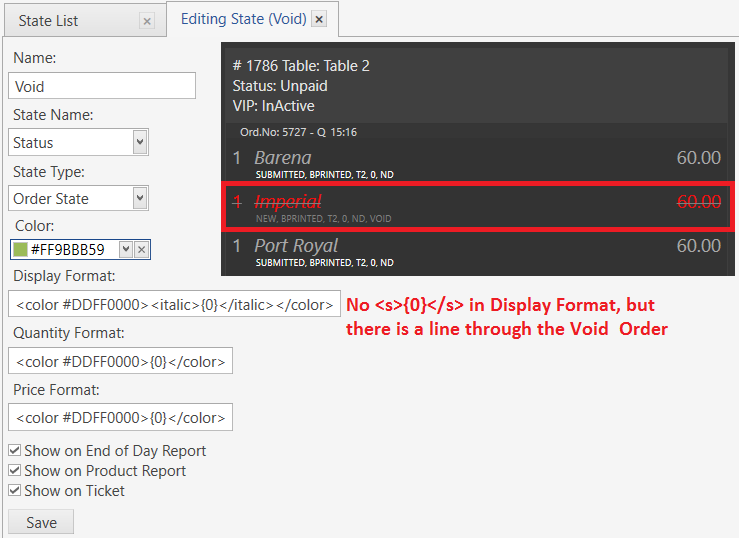 I thought it would be.
Should really come out now we control our own formatting thought I’d say.
Might try changing the state colour to 00000000 as looking at it the strike through is the state colour with the text in white formatted by the colour tag although thinking it might mess things up.
Will try later.

State color has nothing to do with it. When you use Display Format, it overrides anything from the color picker. If you look up at my post again, you can see I have the Void State Color set to Green, but the Ticket has no Green on it whatsoever.

My question to you is: why are you Voiding the Order?

Sorry, pic hadn’t loaded when read your post.
So this is defiantly a reminant from before state formatting.

Found a workaround using <block> … this tag can set the background color, and as soon as you do that, the strike-thru goes invisible.

To make the background color “blend in”, set it to the same as the dark theme background in the Ticket …

Dragging open an old post but anyone implemented a decent table booking system beyond just this shift?
Really want to find a good solution.
Having an hour or so today looking for open source solutions stumbled on this which might have some potential;

Not fussed about front end booking but more a digital solution for restaurant diary for bookings.

I stated building a reservation system for party bookings but near finishing the owner decided he didn’t want it. It listed bookings by date and time order in ticket lister. No calendar though

Can dig up if needed?

I remember it, was helping you with some snags a while back…
What I’m aiming for will likely need to be a web/html/Java powered system.
Ideally the ultimate solution would be that with a samba Intergration so like with my PMS Intergration the table entities will sync and show the reservation names for that shift.

This was another one that caught my eye as maybe having some potential;

TastyIgniter looks interesting, not only for reservation but online ordering. But it’s nowhere near GloriaFood in that aspect.

The one thing that attracts me to TastyIgniter is that it is totally free - you can use with online payments. With GloriaFood you need to pay monthly if you want to access their payment modules (but of course, they need to make money somehow!).

But there is no app for accepting orders, and most importantly no API. So integrating this with SambaPOS wouldn’t be straightforward in it’s current state.