If I choose Separated Prints by Quantity it will print :

on the three different lables. But I want one label to print 3 x Popadoms.

From where do i do that.

Merge lines is option on the template itself, you might have to duplicate the kitchen label template if you have it not merging for a reason.

I have ticked merged lines as shown on the image below. Still same problem. 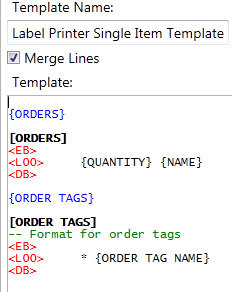 If there not another options of orders by qty? am not at pc to test - never looked at the difference between the two.

Are we talking about v4 or v3?

Thats a fair shout, looking at the screenshot those dropdpwns dont look like v4 - at least not the latest version.

Its v3 he has mentioned that previously. @Ash this forum is for v4, for v3 support visit www.sambapos.org

We need to keep discussions related to v4 it is the current software.

But logically if your separating prints by quantity then it probably wouldn’t do any good to try and merge lines that don’t exist since you separated them.

I am using version 3. It does not have option of Orders by qty.

I have just installed version 4 which has the same options as version 3. So there are no extra options on version 4.

I have just installed version 4 which has the same options as version 3. So there are no extra options on version 4.

This forum is for v4 discussions so we can move forward with the software. V3 has its own support system www.sambapos.org

We gave you some ideas of what to try.

I have tested all the options from the drop down menu. I have now installed SambaPOS 4 and used the option as shown on the image below but still same problem as mentioned above.

Take advantage of the Product mapping for each print job.

PS. I was not implying you have to use v4. We understand some people are waiting for language support in v5 when its released but we still need to keep discussions in the v4 forum about v4. V3 has its own support system and yes its not used much but that is simply because the community for v3 has dropped considerably due to v4 being the current version and v5 due out soon.

Thank you very much guys. Finally it works using kendash’s solution. Although it is a messy way to achieve the task at least it works.

So i had to create individual print jobs for each item, then create actions for each print job. Then add each action to the label print rule. It also works for SambaPOS v3.

Thank you very much guys. Finally it works using kendash’s solution. Although it is a messy way to achieve the task at least it works.

Sounds Great ! Maybe you can share more details for people who may need similar functionality.

First one expands 5 X Coke to five 1 X Coke lines in ticket print.
Second one does the same and prints each line on separate papers.