Can the Close button be set up to clear all items and then close (cancel) the ticket?

If a customer decides not to buy, or they dont have enough money for the transaction can the close button be setup to cancel all items and close the ticket ready for a new transaction, instead on manually selecting the items in the order then pressing cancel to remove them, them pressing close to cancel the ticket?

Would speed things up with being able just to press 1 button to do this?

I dont know if I would want the close button to behave that way… but I could see maybe creating an Abort Transaction button and placing it visible on ticket… I am sure its possible to create that I will mess around with it myself see what I can come up with.

I would like to point out that you can select all the items at once and hit cancel one time it will cancel them all out same time. You do not have to hit cancel on each individual item.

OK I successfully made an Abort Transaction Button here is what you do: 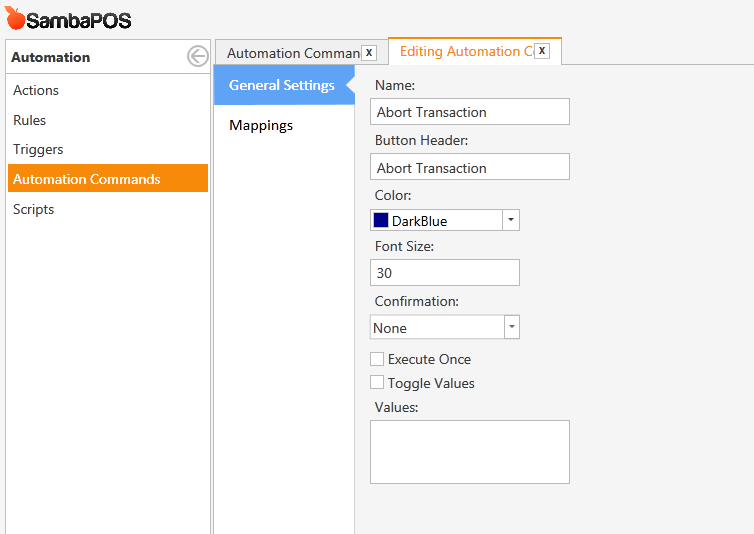 Mapping it to the Ticket: 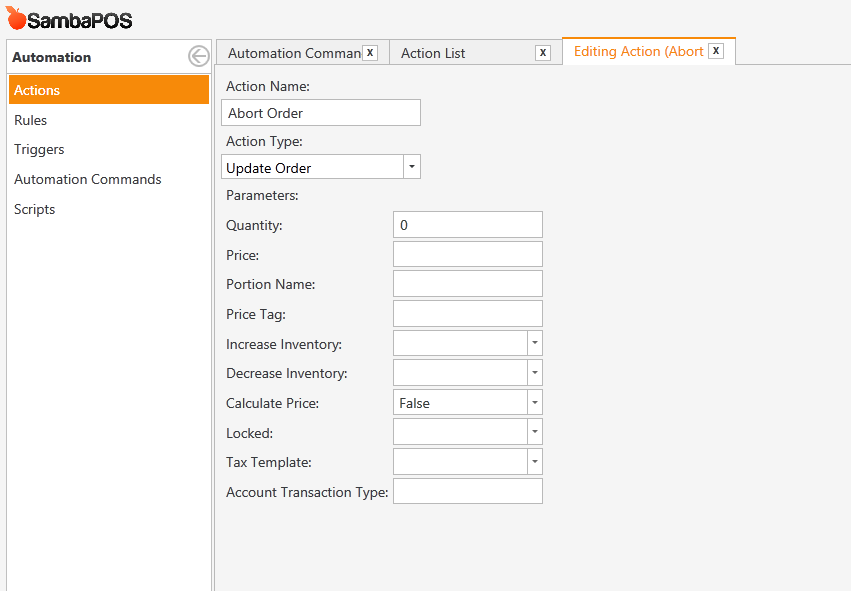 Create the Rule for the Automation Command Execution: 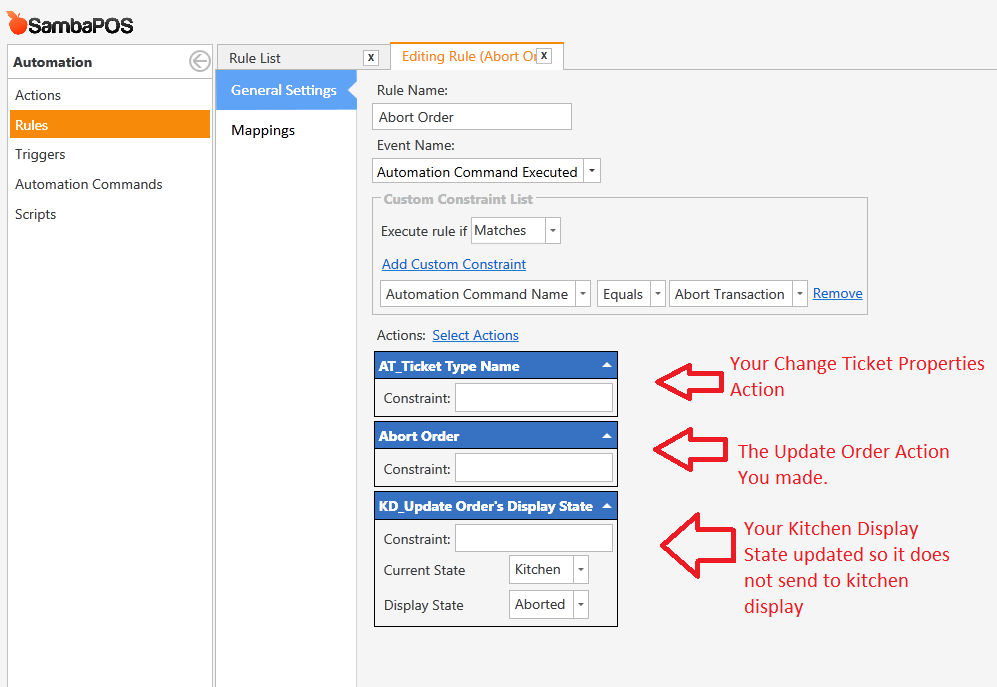 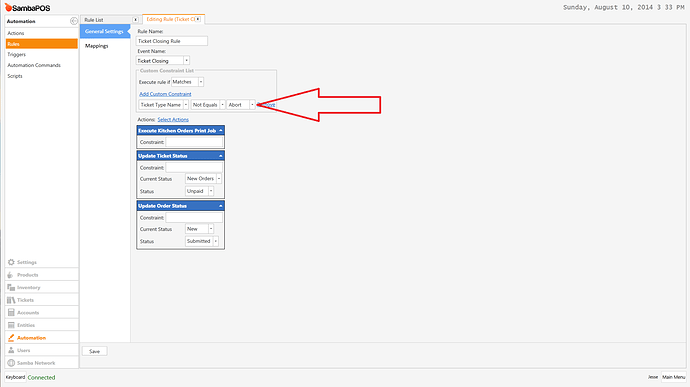 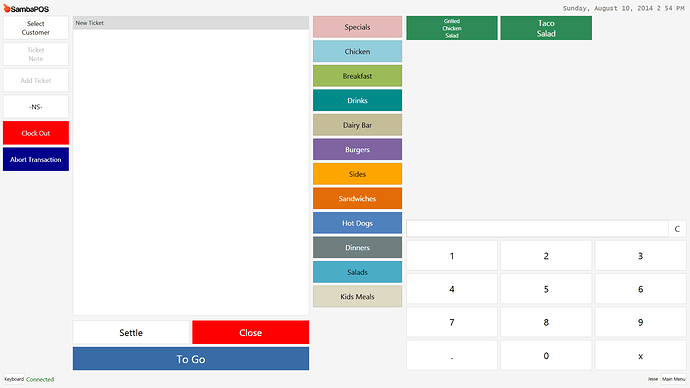 It will display the ticket in ticket lister as a closed ticket with 0 items… with the ticket tag of Abort so you can track how many abort transactions your employees make! 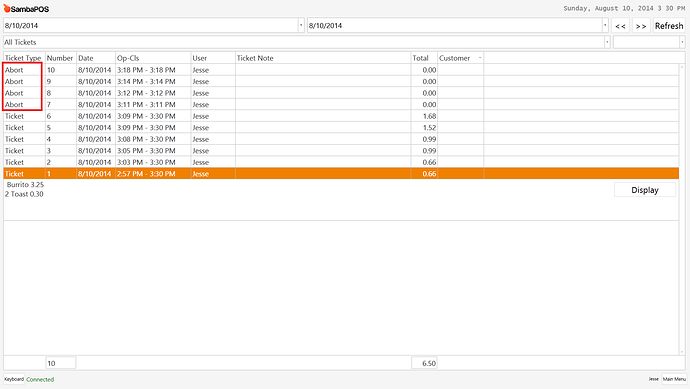 I am testing this to make sure it doesnt cause anyother quirks but it looks like it works pretty well. Let me know if you notice anything.

Ok so I have a method for it to work and I think I have worked out the bugs… This method will keep the ticket transaction so you can track how many Abort transactions you have. Good for suspecting employee theft.

If you have a Kitchen Display setup like mine you need to update the order display status from Kitchen to Aborted This will prevent it from sending the ticket to the kitchen screen.

Emre or someone can you delete this portion of the thread. I consolidated all of this into my first replay above it to reduce confusion.

Sorry for the late reply, thanks excellent thank you very much ive done all that and its working!!

Can i quickly ask, whats the difference between ticket number and ticket id ?

Ticket number is assigned to the ticket straight away when it is created this is not a unique number so i guess in time more than one ticket could have the same ticket number depending on how it is set up, i assume once the ticket number gets to its highest value it resets to zero? i could be wrong there but as ticket number in not unique it must duplicate somewhere eventually

Ticket Id is the actual [Id] field/column in the [Tickets] table in the Database, and that makes it unique.

Ticket No is generated, and can be formatted how you wish. It should also be unique, but it does not necessarily correlate to the Id; in fact, it rarely does.

The reason we refer to Ticket Id when it comes to Actions, Rules, Constraints, etc, is to overcome the possibility that users have changed the Ticket No format. Using the Id allows us to refer to the Ticket in a consistent manner, no matter how your Ticket No is formatted.