I cant connect to my database using sql management studio 2008 and i have windows 7 ultimate operating system. My pos is running in multi user mode. 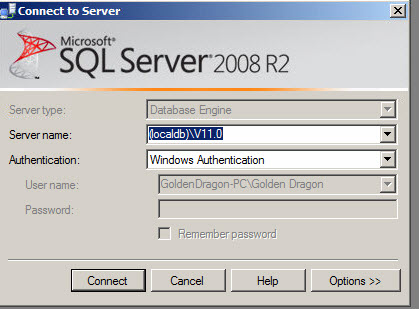 I have the same database on my other laptop same configuration and am using windows 10 and sql management 2012 on it and am easily able to connect. Both laptops are different instances. The first one is licensed and in live environment. On the second one Windows 10 is my test environment.

Please help why i am unable to connect.

Why using such an old software. Try updating to management studio 2017. What version of localdb did you install ?

My pos is running in multi user mode.

LocalDb does not have multi-user mode. It is single-user only, so this looks incorrect:

It should be Server Name or IP followed by the Instance Name for example:

why does it work on my other laptop which has Widow s10 and management studio 2012. 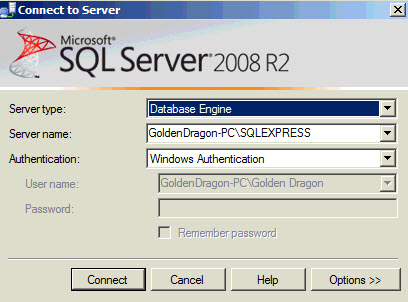 What error are you getting? “Doesn’t work” is the same as “doesn’t tell me much of anything” LOL.

Are you trying to connect remotely to the other machine, or locally on the same machine?

Locally it should work fine, but if you are attempting remote connection to DB on another machine, you need to enable enable Remote Connections, enable TCP/IP, and open up ports in the Firewall on the machine that contains the DB you are trying to connect to.

Is your Instance Name “SQLEXPRESS”? Maybe it is something different?

Are you using Mixed-mode authentication? Try logging in with the sa account using SQL Authentication.

I am using it on the same machine. I don’t know the instance name how do i find out? I see a SQL service running but no instance. Sambs POS is running, so i believe its a SQL service that runs once samba is running. What is the password for the sa account?

It sounds like you installed SQL Express LocalDB (probably 2014 version) along with SambaPOS installation which is a single-user DB Engine, and it starts as a User Process when SambaPOS starts. Your Connection String in SambaPOS is probably blank as well, which means it is using Windows Authentication, and is not in mixed-mode, so the sa account will not work.

When you close SambaPOS, is the SQL Process still running (use Task Manager to see). If it is not, then you will not be able to connect to it, because it isn’t running.

You probably also cannot connect to it while SambaPOS is running because LocalDB is a single-user Engine and only supports a single connection at a time.

“My pos is running in multi USER mode.”

Do you mean you have more than one terminal in the venue and that you are able to order, manage or such in different PCs at the same time or do you mean, you have multiple user names using different PIN to login the SambaPOS?

what’s the instance name on the Win10 system that you can connect with the MS-SSMS2012, ?

Basically i took a backup of the database on sambapos on that live terminal and uploaded to my other sambapos free version on another laptop which is running Windows 10 OS. I am very easy able to connect to the DB on the Windows 10 laptop using SQL management Studio 2012. There is no instance running but a service in task manager. I use the following to connect:

Whats confusing is that besides the operating system and the version of SQL management studio on both laptops everything else is exactly the same, as i loaded the database from the live version into the test version.

Show a screenshot of your services in the S’s where SQL is listed.

If your using localdb then Sambapos has to be running when you connect. Start Sambapos then try.

sambapos is running i still cant connect to it.

The versiom installed of localdb is 2014

You can install SQLExpress 2014 on Windows 7… I have on every one of the 50tills I’ve sold.
Pretty sure you can’t connect as SQL Manager is older than the SQL database.

Welli installed Sambapos V5 on both systems with generic setup. As i said after i take a copy of the database from the live pos and restore it on my test laptop, i can easily access the DB using SQL management studio 2012 but can not do so on the live machine.