Hi guys for some reason I cannot seem to get my Cash Drawer to pop open with SambaPOS. TBH i cant seem to get it to kick open even with Printer preferences.

Anyone able to spare some time and help me out?

First rule out physical fault.
If printer utility will not open drawer that is sounding like the case…
Check its plugged in the correct port on printer (its a 6 pin port that looks like network which is 8 pin rj45) if its a multi function printer with network port and your using say USB make sure its not plugged in to network port (happens allot with some of my clients) likewise that it is plugged into the drawer port on printer and not the ethernet port on the till machine - again have had several clients to this…
Test with alternate printer - ideally one you know kicks a drawer ok.
Test different drawer - ideally one you know is working on that printer.
If you cant get it open using printer utility then samba is not going to have much of a chance.

The printer is a Epson TM-T88 ii, I have also tested it with a aures TRP-100 (which i couldnt work out if it was that or the Drawer)

The current setup is Cash Drawer via RJ11 into Epson printer, Serial output into Com1 on the POS. 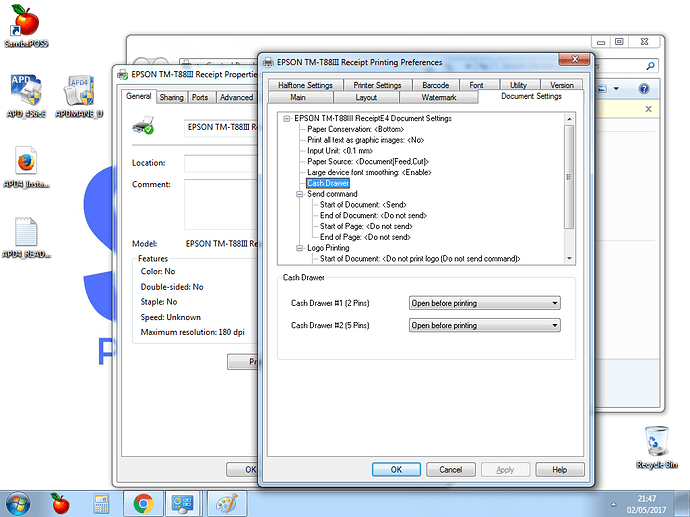 If its epson there should be a utility also with a kick drawer command button…
It might be incompatable drawer posibly, I strugled with one type of drawer and came to the conclusion there are two twpes on pinouts used (think its EPSON style with is most command and Star which is less common but never bothered testing much deaper as they were cheap drawers.)

Drawers are very basic.
If it’s an epos printer find the utility with open/kick drawer button.
If that doesn’t work samba has no chance.

Sorry to be a pain but I’m not too sure what kinda utility that would be. Very very new to all this, it’s a Epson tm-t88iii printer

Ive installed many t88 ii printers and they all can kick the draw open. Though ive always done the following whenever ive had to trouble shoot cash draw kick open issues.

Since cash draw is connected to printer, if printer doesnt print at all then usuallu it wont kick the draw open either.

If it is configured properly but still not opening, next i usually check the cash draw cable that is attached to the printer to ensure its securely set in place. If your cash draw had a rj11 port also then it means we can even test differenr rj11 cables to see whether cable is faulty. If the cash draw doesn’t have the port but instead its non removable then you may have to test the cash draw with another printer or test another cash draw with that t88 printer and see what happens.

Hi guys, thanks for your replies. I just cannot seem to get this working at all

I downloaded a few tools now and just cannot seem to get it working.

I got me some tools too. Tried them, but still no luck. For some reason I can’t get them to work. They just sit there on the floor and do nothing.

More information: A small girly hammer, and a hacksaw.

@Colin_Lundy, did you try the Epson Utility? If you did, and the drawer still does not pop, then there is a physical problem with the Printer, the Cable, or the Drawer, or an incompatibility between them.