Have I missed something?
If not any chance of an action to clear the NUMBERPAD for situations like this?

I had that issue in my last post. @RickH posted this

"You can automate this, add the set numberpad action to your rule, and set it without a value

Add this action as the last one in the rule and it will remove any numbers on the input field on the pos screen. I had the same issue and this worked a treat

However I haven’t implemented it yet because even though it made sense, I had no idea how to really do it.

He goes “add the set numberpad action to your rule”

Uhhhh… does that mean create a new action for the number pad, then insert the action in the two rules we created which consists of the number pad value?

maybe I’m just confusing myself. not sure lol

One sec, ill show you a screenshot of my streamlined single rule fast cash rule 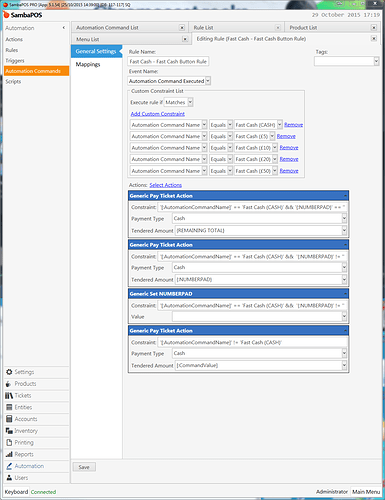 NOTE: Each of the valued fast cash buttons have the value specified in the ‘Value’ box from which a single action (the last one) can tell which one was pressed

So you created a new action called Generic set Numberpad. the inserted that action in the rule for your fast cash buttons. Correct?

Yes, doesn’t need to be generic but that’s my preference.
It would have to be after (anywhere after) the action which uses the {:NUMBERPAD} tag.
The constraints probably aren’t needed but again my preference to try and prevent possible mixups in future when working on other rules that might use numberpad.

Totally understandable, but what did you put in the ‘Action Type’ and what values did you insert to make the action before inserting it in the rule?

Can you screenshot it for me? Sorry for the hassle man haha. it’s easier for me to understand what is written along side screenshots.>.<

I’m such a hassle sometimes.
Sorry again for the trouble

There are only two fields

Haha no wonder I couldn’t find it. I was typing “numberpad” in the action type instead of “Set NumberPad Value”. I got it to work finally. Sweet :P.
Thanks a lot man

You said ‘set numberpad’ in your first reply

That wish RickH. he didn’t have any characters to distinguish that I should look for or type “set numberpad” hence why I think I got confused as to what he meant :P.