So were close to installing a multi terminal set up, and about to buy a license for samba5 for it. Now the client has requested that he is able to take the “work home” to “add products”.

How do I go about this, do I show him how to transfer databases to and from?

Im guessing we would have to clear the license keys each time?

Team viewer/Remote Desktop would be simplest way for a novice, avoids and licence issues and lost sales data if they don’t do last thing and restore before opening next morning.

I wouldn’t recommend having multiple copies of a database, to push updates on when you dont have a choice.

The best solution is using a program such as UltraVNC http://www.uvnc.com/
You install it on both the terminal and your clients home computer, and from his home computer he can connect to any terminal any time, and update it.

got there before me i guess.

I found VNC to be less obtrusive in connecting. Teamview has a big window which pops up when you connect to it, which an employee who see’s this window can click on and end the program. In VNC there is no notfication when someone connects on it so you dont have to worry about an employee stuffing around with it, plus you can have a black screen so anyone watching the register wont be able to see whats being done.

Edit: well you can do the black screen with teamviewer.

As said it depends on options with firewall, vnc needs port forwarding which is big pro of teamviewer.

As for the pop up, it depends on motive, generally you don’t want to be remote viewing during open hours anyway as interfere with till use.

An option I have at hotel is the server/SQL host machine is dedicated for that and headless so I teamviewer into that as no one can see and doesn’t get in the way of staff use.
If don’t have a server can use a budget sff PC as a headless client machine somewhere out back as a remote hosting machine.

In fact i don’t know why I didn’t think of that.

I use a program called RemoteAccessViewer. Much more stable and less intrusive than team viewer.

Ill suggest that option, hopefully he will take it on board!

I liked teamviewer for it’s snappiness and ease of use, but didn’t use it for my restaurant because they explicitly stated the free version is for non commercial use and I don’t want it to hit me on crucial time. What I sometimes do is to port forward my Remote desktop protocal and only accept my static IP Address from home.

Though my favourite method is to make SambaPOS backup database automatically to dropbox/google Drive, where I restore it at home, make changes, upload them back to dropbox, then restore the modified DB (never forget this !!) at the restaurant in the morning

This way I don’t have to make sure the restaurant’s POS stays on. Though if your database grew large enough (~150MB) to the point of being infeasible then I have no idea lol.

use the program i said above, it shows no signs whatsoever on the client PC. Ive watched my staff from it before they had no idea

I liked teamviewer for it’s snappiness and ease of use, but didn’t use it for my restaurant because they explicitly stated the free version is for non commercial use and I don’t want it to hit me on crucial time.

I think only large corporations and those dedicated to doing IT support actually buy a license for Teamviewer. I would love to but it’s too damn expensive (but software is good). I have never had any issues in using the free version, except version 11 kicks you out after a couple hours if you remain connected but then you just reconnect again. From what I have read, the “protection” they have will only physically block you from using the free version if you use it on a network that is part of a domain / active directory, which unlikely anyone will do for a POS setup. Or if they consider you might be using commercially, say if you have 100 saved clients on an account. Either way, what I heard was it will still work but will kick you off in 5 minutes because of “suspected commercial use”.

but it’s too damn expensive

I would say if your just using for yourself to login to till your not really commercial and unlikely to get flagged.
I have about 40 tills/computers in my account for untended access and probably count as comersial but why pay untill they force you lol

why pay untill they force you lol

And you remember this is a public forum, right?

I did not know they do monthly plans, I thought it was like £500 one off payment. Monthly plan I might consider then, because if I can stop that commercial use coming up on clients I think it looks better and can also brand the QuickSupport.

“1 session channel” is a bit of a pain, however it is very few times I connect to more than one PC at the same time, but it has happened.

BUT I don’t see any monthly pricing plans on here: http://www.teamviewer.com/en/pricing/. 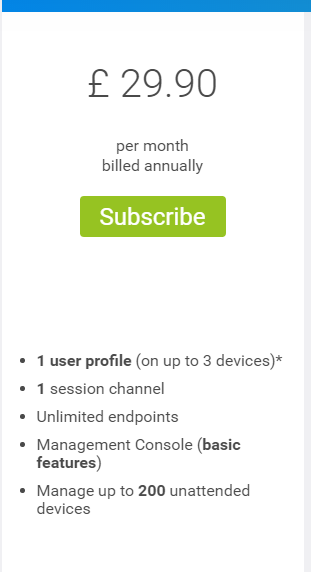 although just noticed the billed anually… thats £358 a year

What is the URL of the page showing that subscription package?

They’re blocking by geo-location. In Hong Kong I only get one-off licenses. 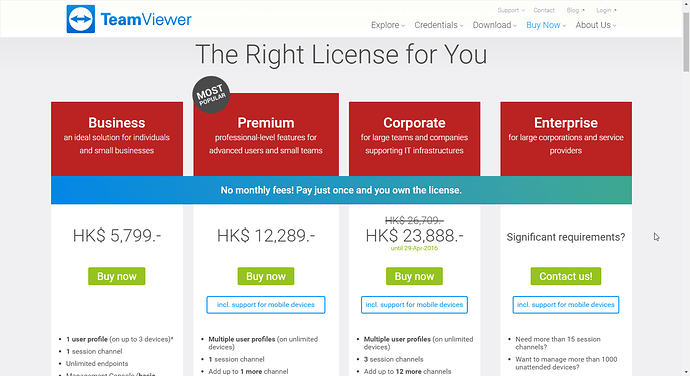 If I go to their site from my server based in the US, I also only get one-off licenses but in USD.

Must be a UK thing. Will check (I have access to PCs located in the UK so if need be I can easily sign up from there).

UPDATE: Yeah, nothing even official on their website for me about monthly plans. I hate companies like this who are deliberately not being transparent and also forcing some countries to pay much more than others…

You can set up a VPN and have the client connect so it will seem like they are a part of the network. I set one up and it worked pretty good. Itll connect to the network so you can work

You can set up a VPN

I think that’s overkill… remote access would suffice for any such situation.

VPN requires port forwarding etc the same as VNC,
VPN is overkill for remote control for sure.

I used to use TeamViewer all the time myself.

Recently switched to using AnyDesk which is by an ex-TV developer. Still in infancy, but works fairly well… I find it faster, smoother, less bandwidth use.

It is Free as well.

Just looked at that, definitely going to try that out! Thanks

Their professional pricing to get a custom branded version is also not nearly as much as TV.