I’m trying to merge my setup into the one database. (i have everything on a couple of databases at the minute)
Is it possible to show the Database Name in the Shell header using the Update Application Subtitle action.
Is there a printer tag or something i can use?
I think it would be useful to know which database i’m on without having to go in to settings everytime.

You can setup any name you like on update application subtitle action according to your corrent db. And on every db you can set it on user login rule.
For example on db1 set it to show db1 on user login

I have buttons on a custom navigation screen to switch the database on the fly. I would have to logout and back in each time. If there was a tag i could get it to update the shell header using the Application Screen Changed event

Good to see you posting Pizza!
I have followed a lot of your posts, hope you are keeping well - (sorry off topic but nice to see a familiar).

Just take samba to windowed and look at title bar.

EDIT: Never mind i see what your saying. LOL sorry just woke up.

Like they suggested just program an application subtitle action to display the database name when you switch.

@silentbob - This is something I wanted to do too, and it is possible. I created this rule which runs some SQL to return the current DB name. I take a substring of the DB name and if it equals “-DEV” then it will show the message (my development DB has -DEV appended to the DB).

But, you would equallty just print the output of the full DB name straight to the shell header. 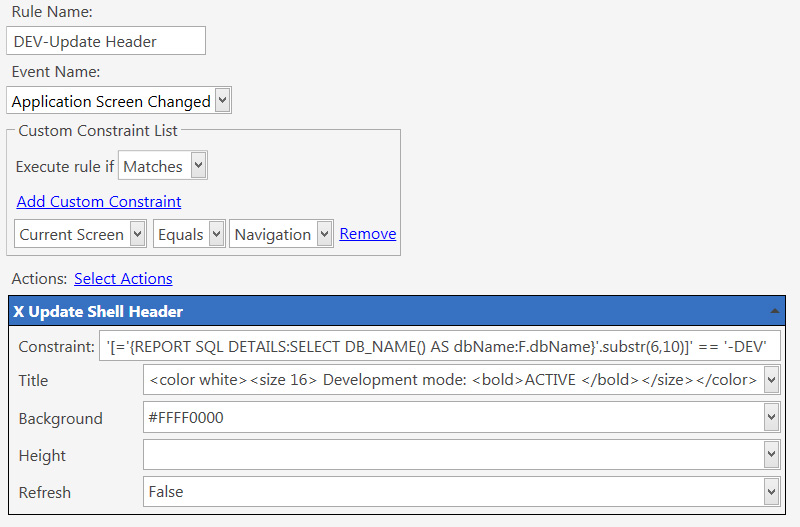