Dear All, i installed SambaPOS V5 and currently using my restaurant data. It is working fine. Actually, i didn’t install SQL express 2014. But software is running well.
Please, explain me about SQL database.
Respects,
MDHasan 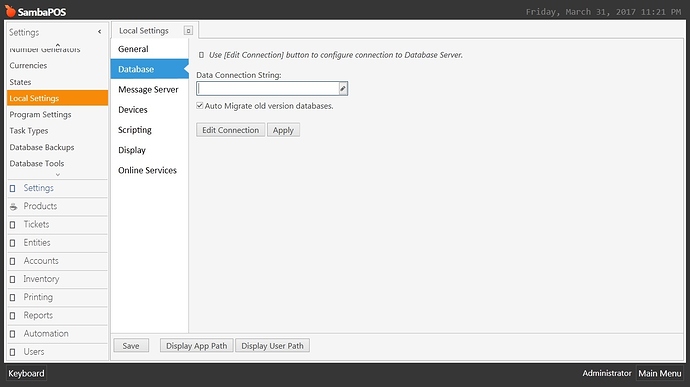 This means your not running on a database, your running from a text file. Not ideal

To start off, you need to just double click “Samba” top left and show us what it says in the top bar. 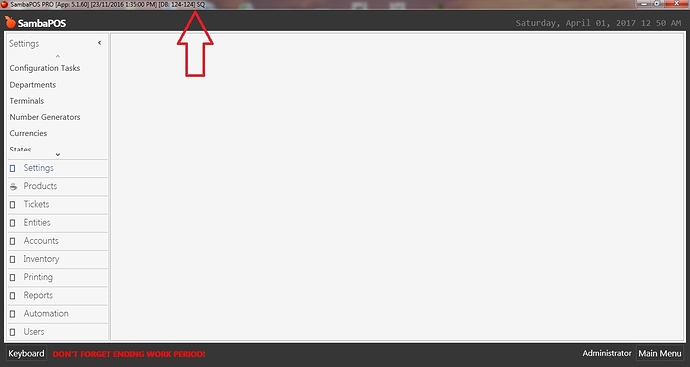 The “SQ” indicates you are running with a SQL Database. You probably downloaded and installed SQL LocalDB as part of the SambaPOS Setup. This will be ok if you only plan to run a single Terminal (because LocalDB only supports 1 connection), but if you will be expanding to use multiple Terminals, you need to install SQL Express (non-LocalDB version).

Either way, a Connection String is not always necessary, since SambaPOS Setup will by default create a DB by the name of “SambaPOS5”, and it will use an Instance (Data Source) parameter applicable to the Setup, and it will also use Windows Authentication (Trusted Auth) to connect.

All that said, your Connection string would be something like one of the following, depending on your setup, if you wish to enter it manually:

For more information about the INSTANCENAME, see this post:

So, your connection string could be like any of the following:

Again, the User Id, the Password, and the Database parameters can be optional.

Dear QMcKay, now i will install SQL Express 2014 and change my local db to SQL express 2014. Is it possible?

Yes, it’s simple from localDB to SQL
You should be able to just backup and restore using samba backup.

Thanks you JTRTech, now i will install SQL2014 and restore from backup Database.

Dear All,
I want to install Samba POS for Multi-Station.
Could you please suggest me installation steps? Right Now, I am confusing that:
Which one need to install first “SQL Express 2014 or Sambapos”?

You can find required information here. 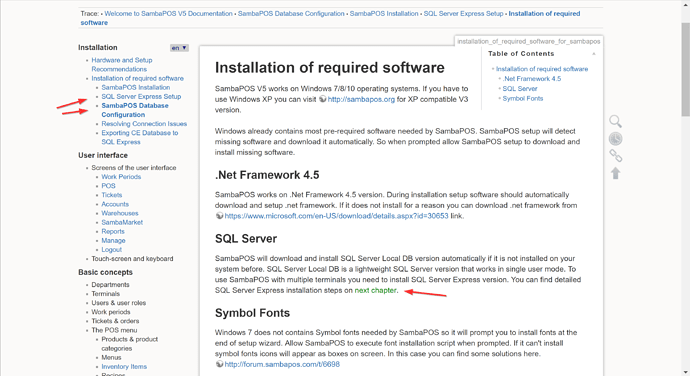