Hi Almost got everything perfect but having an issue with copying / moving the database to a new server.

I have had SAMBAPOS running fine but have decided to build a new server as I have now finished testing and configuring.

I have SAMBAPOS installed and working on a new server with a new sql instance. I have exported

I have ‘Database Tools’ installed and on the old server have exported ‘all items’ to file and then on the new server tried to import but I get the following message :- 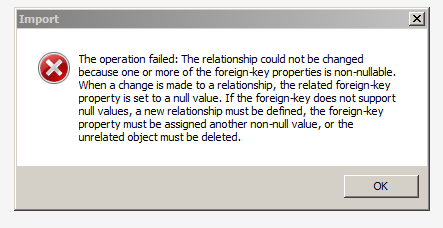 any help with this would be great.

Many Thanks as always

If you’ll move everything you can clear all transactions and just move the database. If you own database backup module this is just a backup and restore. However I’d like to investigate the error if you can PM me the zip file that contains a backup of your target database and the export file.

OK. Thank you very much for the zip file. I’ve solved the issue and it will work fine on next update.

For a quick workaround delete existing default print jobs from target that already exists in your export file contains and import your configuration.

That worked ! will there be plans to include department in the export/import tool in the future ? as these don’t get exported?

I was hoping that the export / import would copy everything. not to worry I’m sure I can figure a way - I wont give up!

We can include departments but not products, inventory items, recipes and entities since that tool designed to partially import / export / merge configuration data. We’ll create separate tool for products and entities and that will also support imports from external files. Unlike database tools import it won’t merge with current data. Just create non existing items.

Since you want to move everything you can solve it easily by moving entire database to target computer or create a backup on source and restore it on target.

Emre
I am learning all the time - I didn’t realise that I could just copy the .mdf files and it would work! should have tried the easy way first! Always thought SQL server would be a bit more complicated so didn’t expect it to be so easy. Thank you for your help. I am now up and running on windows server 2008 with 6 blackberry tablets and everything is perfect

I’ve been trying to figure out the best way to import/export products and inventory items between my development SQL instance and my production SQL instance for a few days and your post helped me figure out my preferred method.