I am trying to pull the work period start date for a script.
Am using;

But the value in the database is

The format returned by the query is giving me great difficulty as is in wrong format to put into SQL query later in the script.
.getDate() etc doesnt work on it

Ok, system time solved it but script doesn’t seem to like the time part now!! If manually put yyyy-MM-dd on its own it works but with time I get an error!

If you look at some of my scripts, the way to force the date format is to do a conversion using a pre-defined value for formatting.

Take my word for it - the following is what you want:

Believe it or not, the important part is the number 126. This is a pre-defined integer representing this format:

Yes, there is a T in there separating the date from the time. Use SUBSTRING or LEFT methods to get the pieces you want:

But having the T can be useful when you use something like this in JS:

@QMcKay what does echo achive?
Googled it but struggling to follow the uses, I usually understand your explanations.

Echo prints it on screen. If in command shell it will show that value.

Am still struggling to get it to work, cant just use date encase there is a past midnight sale from day before…
Workperiod ID would be nice in ticket table LOL 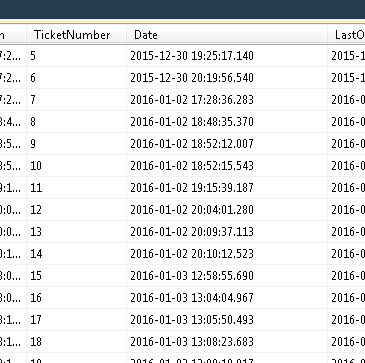 Lots of things to try, but I can’t tell the answer unless you show the full query.

Run the query SSMS to find out where the error is being thrown.

declare the variable in your SQL and assign it the @3 value, then convert it to a proper format.

Thanks Q, have had a bit of a drawback so am having to restructure the scripts as negated to take order tags and gift/void order states into account ass order price is still recorded in full and reported seperatly

Its 100% having the colons in the time in a script which is passing parameters into a seperate SQL script.
This works;

This works for date without time

However with time (colons