Draw out the keypad similar to Custom Entity Screen

Sorry if this has already been suggested, did have a quick search.

But I was wondering if we would ever be able to draw out custom buttons so that they could have different sizes, as well as changing the size and postion of the order screen bit.

Not exactly what you’re asking for but menu categories have a setting to adjust numberpad height. 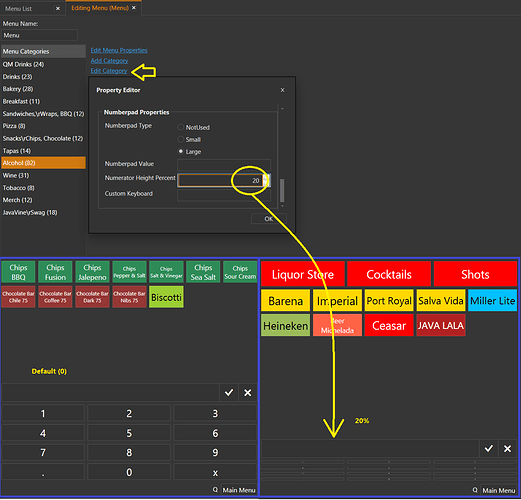 I agree it would be great to have more control over the design of the pos screen. I know there was a discussion a while back where it was suggested having a custom entity type screen for the post screen so we could design it how we wanted etc

The only control over the size of the product buttons currently is to select the number of columns and the height, you will always only get a grid of same size buttons

Yep, if we get this feature the POS design become that like NCR’s Aloha or Compris. Which for Sambapos a software costing $100 is very good.

Why I suggested this is because the infrastrucutre is already in place as can be seen in the custom entity screen, all that would be needed is allow the order screen to go into design mode

I’m fairly certain the NCR solutions are much more than just $100 they are subscription based. $100 per month maybe. At the prices they charge it better be very good.

Thats what I was implyhing, SambaPOS5 which costs $100 could get the customistion that NCR’s solutions do,

It has more honestly. It’s different than those systems

Except for the fact, the POS screen is not cutomizable, at on of my places that Ive gone to look at POS sysstems is XChangeSuite. the example they showed had aout 10 categories with each category having over 40 different buttons of varying sizes in each.

If your in that type of market those solutions are great. But Sambapos offers local customization for your business that they don’t. Eventually Sambapos will have all of those features.

I know. All I was commenting on was saying that for $100 Samba has so many features, and so much cutomisation.

Yes I think I confused what you meant to say. I agree Sambapos is simply amazing.

I was pointing out, one of the reasons people tend to go towards the big brans POS solutions is for the customisation. And I was really interested in the ability to draw out my own keypad and Im sure many people as well are.

I disagree honestly most go for them for the support and ease of setup. Support being the biggest draw. Sambapos is infinitely more configurable. But Bigger companies especially NCR who power the worlds largest retailers and chains have infinitely more resources so it really is bad to compare the two systems this way. Sambapos will eventually have every feature we want.

NCR powers Walmarts system. So infinite resources may even be underestimating it.

Just out of interest @emre would it be easy to impllement, to do Ctl Shift D and then add custom buttons?

He would have to completely redesign it as it is now. It’s not about difficulty it’s more of is it useful enough to rewrite that completely and then work through issues with that. I think we should wait for v6 for a change like that.

What about support for changing buttons individualy. say an option to make a button the size of x number of buttons joined otgether