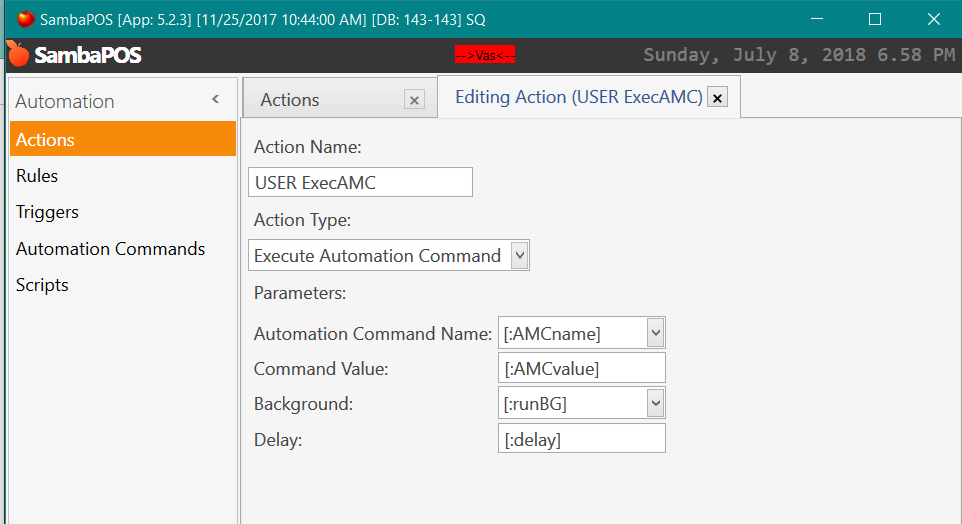 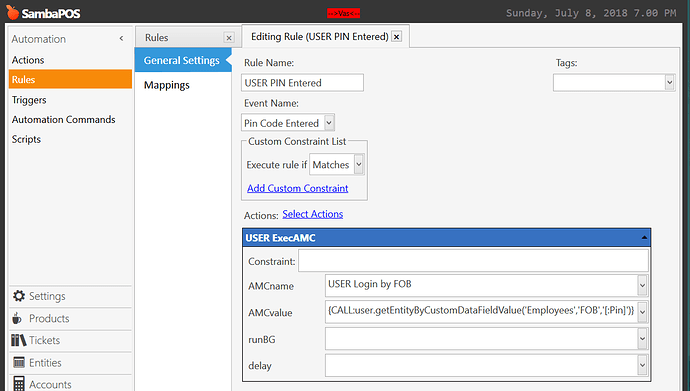 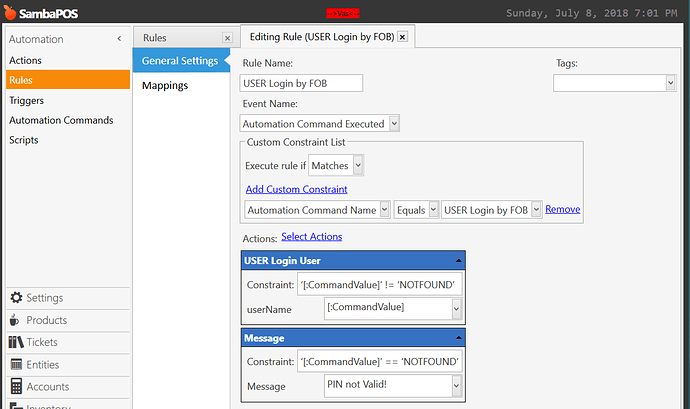 Here is a example employee entity: 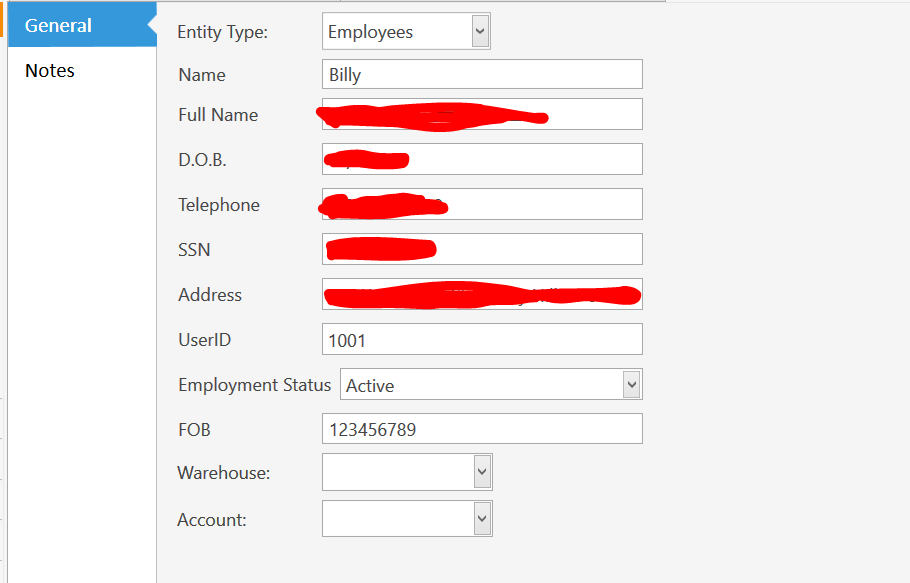 in my set up name is the same as username 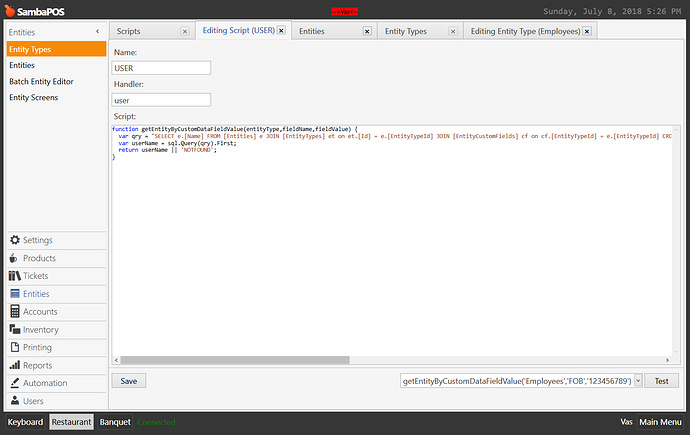 so what does this test return?

What does this return in SQL Manager?

Q is wiz and SQL and have tried script with different fields on database on this machine and works.
So check the script directly that your getting what you expect then check with message in samba that its working and returning as expected in samba.

This script uses a JSON parser introduced in 2016 which wont work in previous versions.

It is not enough to upgrade. You need to set the DB Compatibility Level to 130 or higher…

SQL 2016/2017 JSON Features Why do you want JSON features in SQL 2016/2017? A lot of data in the SambaPOS Database is stored in JSON format. Dealing with JSON in SQL Queries in earlier versions of SQL Server was very difficult. With SQL Server 2016/2017, several features were added to make dealing with JSON data much easier. You might not think you need to use these features now, but enabling support for JSON is very simple.

It was the compatibility. I appreciate you guys taking time to help, thanks

Hi…as per my experience adding dual pins may solve your issue but we shouldn’t add a specific feature for every case we encounter. Maybe we should execute a script when a pin entry does not match to allow custom logins. I am not saying this will be a better solution but such approach will also be useful for user-entity method.

@BilHonan not sure if you missed the beginning of the topic but this is what was done. Emre added a rule event to allow us to catch invalid pin entry and abolility to login with an action allowing a bypass for default pin with a second pin.

Finally got round to trying to improve my idea for dual pin.
Was thinking I could use the new password field in user however it looks to be hashed in database.
@emre can I ask what hash type you have used so I can hash the incorrect pin and check against password?
The values in the column look to be prefixed with some stings separated by $
See V1 so guessing you have left open for adaption to alternative hash methods in the future?
Looking at what I guess is the hashed password it looks more complex than md5 etc, guessing they are salted too?
I understand password field is not set to require being unique so plan to only return first result to prevent issue or maybe call via a script and make it not login if returns more than one.

can I ask what hash type you have used

I may change to sha256 in the future but his is how we verify passwords atm.

Thanks for the info, going to need to research some of those functions LOL.
Unless you perhaps might happen to have a snippet of Jscript to just create the hashed value given original user entered password by chance?

going to need to research some of those functions LOL.

lol I posted it to encourage you to give up.

you perhaps might happen to have a snippet of Jscript

… Of course our JScript environment does not have support for cryptography functions but maybe doing it by importing .net assemblies might be possible. Well I don’t know if it really worth for the effort.

I posted it to encourage you to give up.

I was guessing something allong those lines was going to be needed, still tracing variables to try and see whats hapening.

I posted it to encourage you to give up.

Think your going to win in all honestly but you know what comes next now;

Can we not get a secondary pin field for users

‘Quick Pin’ for RFID/MSR, either pins work,1 out of two required, both in same unique pool amongst all users?

Can we not get a secondary pin field for users

But what we’ll release with V6 if we’ll implement everything in V5?

So just to clarify I will need to input both the password string entered § and the hashed password (h) to test against?

Forget that, answered my own question, so would need to call all users and loop this function inputting entered password each time with the looped hash from each user.
Awesome, thanks for that emre.
Will sort a tutorial when implimented.

You’re calling the method I previously gave the source code. You’ll send password entered by user and the hash stored in the database.