Hey guys, I haven’t been able to update in regards to the integration, as I’ve had many clients since that time and I’m pretty much lone wolf right now haha. Got a lot on the plate that I have to clear first before I can venture further into it. But in saying that, in the next few weeks I will have more time to look at it, and I’ll update accordingly

The issue currently making card terminal integration tricky is the ability to listen to the terminal responses as beleive they generally return a sting of responses, ie enter pin, processing, approved or denied.
Managed to get the sale total sent over to my dev PQD machine but hit a wall at listening to re responses which are not direct responses to the original post.

For those who are interested I have just received my DEV/Testing EFTPOS terminal to make an attempt as integrated card processing.

[image] The company is Payment Express http://www.paymentexpress.com/ Literally came today so not got any info on possibilities yet but know many have been looking for a solution. My understanding so far is; SambaPOS need to post XML info to the machine on local port. Machine does its stuff Machine returns XML response. SambaPOS acts based on the respon…

Hmm… As of this week, I will finally be able to start focusing this integration. I’m new to this API stuff so I’ll try my best to do as much as I can, and with help I may be able to achieve it :D. Lets do dis !

@JTRTech you’ll need a custom device that listens a port (or where that device connects to) and trigger sambapos events based on data received through port. Pretty much same as what filemonitor device does.

you’ll need a custom device that listens a port

I did read the post about making a custom device, not had chance to do anything with it yet though. Is on the list.

Well I have the latest terminal for use here in Oz and have been buried deep into the SDK manuals! The System has a full FILE API - which could be used with the proposed File Monitor ACTION/EVENT @emre has been considering.

Here is the flow: 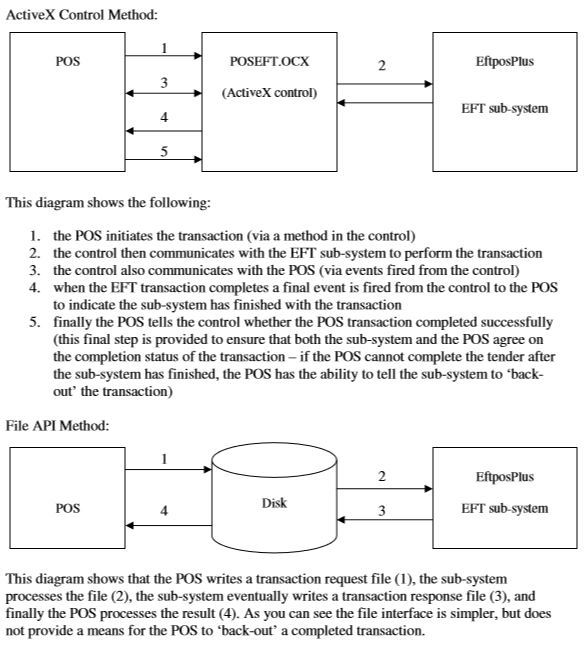 The question I have:
Using the HTML WIDGET can we use some sort of JSCRIPT to talk to the POSEFT.OCX?

Speaking with the Tech Dept., the bad news is there is a Full Accreditation you must pass!

and UNFORTUNATELY you cannot bypass some of the conversational data flows (2-way).

So @Jesse (I am pulling all resources here

What did you actually achieve back here?

I just successfully made the folowing behavior… I added a button called Clock Out on the same screen as my TimeTrex HTml viewer… when pressed it invoked the Clock out portion of TimeTrex which caused timetrex to record the punch and then send another value back to SambaPOS telling Samba to logout… lol it worked great… Not sure I would use that but it worked! The really cool thing is… i was able to record a punch inside timetrex WITHOUT all the fancy API calls and .bat stuff I was using. Now th…

Are you suggesting we can use some “external” control on the above “POSEFT/OCX” ActiveX control where a dialogue, almost 3 way SambaPOS <-> Jscript <-> OCX, can be achieved?

The post you referred too is specifically ONLY for HTML Widget nothing outside of that.

OK I must have misunderstood your post, apologies. I am very interested in how far we can push the HTML Widget as most things in life revolve around the “Browser”.

Ok this link has some possibilities

How to handle an ActiveX event in Javascript

@emre is this possible in SambaPOS now? I am just unsure above the references to script block format and place the object tags in the ASP.NET form.

Help needed in the translation

Enough from me now, over to…?

I know we can hook a few things inside JS using ActiveX, and from that link, this is the part I would concentrate on:

Log Folder/Directory Build Script - Particularly proud of this one.

Query MySQL from within Samba

Download the ODBC Connector (driver) from the MySQL site.

EDIT: unfortunately, those examples initiate actions, they don’t create “listeners” which might be more what you are looking to do… not sure…

Have been Googling Event Listeners - this is a side article but relevant to this topic and other ongoing discussion.

C# COM Object for Use In JavaScript / HTML, Including Event Handling

A complete example of how to create a C# COM object for use in JavaScript / HTML, including event handling

The URL bit leaves off “…including Event Handling”
A worth while read!

Hi Shivan, have you figured out the eftpos integration with samba?

Apologies for the delayed response.

We have a working demo of the an integration with Tyro.

But there are still some bugs and tests we are doing to get accredited.

We are still working with Samba to get this one, but at this stage there is nothing live.

Once we have a live beta test, we’ll let you know

Hi Shivan, I was wondering if you were able to complete this project?

This would be such an amazing feature for us Australians!

Same for us in NZ

Hi guys. Its been quite a while since my last post here.

Other than what we put together back then, the project has been put on halt while there are talks between Tyro and Samba team.

Until both parties come to an agreement, we may not be able to move forward with the integration just yet.

it has been 7 years since topic created still nothing and if it’s hold now we should expect the solution in 2050?

Payment integrations are not simple and there are many things to consider. When the timing is right and we can find a deal good for us we will do it.