Erase one various fields once in customer register 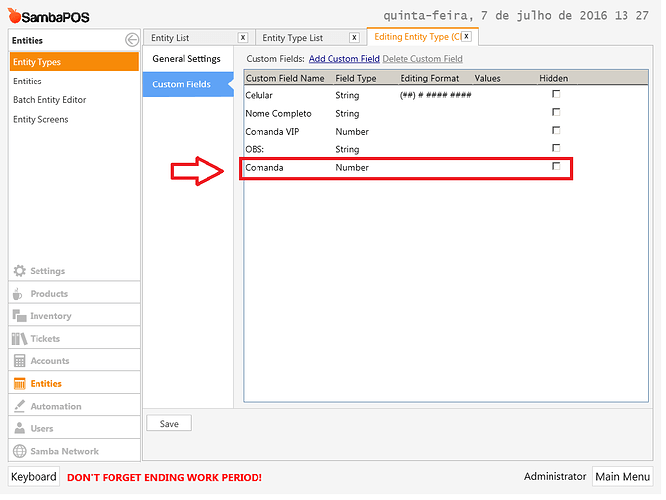 Excuse me but
my English is not very good

now I need other help

I bought version 5 but I am still using version 4

as I am new to sambapos

We have a PUP and did sambapos work with electronic commanding

how to solve this?

You want to delete the field or the value in it?

the value
but all files
Can you help me

Batch entity editor probably the simplest way, how many entities you have? 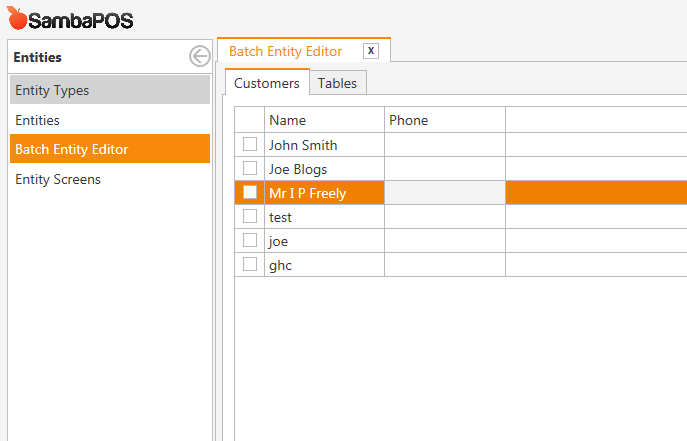 You can just do;

You could setup a loop value automation but bit over the top if its a one of.
V5 you could script something but again if its a one of and not 1000’s of entities easier just to use bulk entity editor.

I want to delete only the value.
I need to clear the field value
But of all the files at once

Can you help me?

Depends on how many enties your talking, a script is not a 2-3 minute job, entity data is stored in json within sql so would need to use included handlers/parse json in a jscript, if it was column per field SQL query would be fairly simple but not the case for custom fields.
If your only talking a 10’s or couple of hundred its will probably be quicker just to do manually in batch editor as above.
Oh and also scripts not available in V4

Depends on how many enties your talking, a script is not a 2-3 minute job, entity data is stored in json within sql so would need to use included handlers/parse json in a jscript, if it was column per field SQL query would be fairly simple but not the case for custom fields.If your only talking a 10’s or couple of hundred its will probably be quicker just to do manually in batch editor as above.Oh and also scripts not available in V4

OK
BUT I HAVE LICENSED VERSION 5
HOW TO SCRIPT?
TO SOLVE THIS PROBLEM

NO NEED TO SHOUT!! YOU POSTING IN V4 SECTION OF THE FORUM

You need to call a list of entities for the entity type, then for loop thorough them updating the data field to blank.
Youll also need an entity count to set the number of loops in the for loop.

Not sure if there are helpers/easier way for getting the list or loop, my system used SQL queries for the list and count.

Use this loop to cycle through entities;

Within the loop define the ‘loop entity’ like this;

Use the entity data helper to clear the value;

You obviously need to set the ***FieldName*** and ***ENTITYTYPE*** value - it will be in quotes if a static string.

Which you would run using function clearEntityDataFields('***ENTITYTYPE***','***FieldName***')
You would need to add the handler if running outside of the script window using the test field.

I do not know how to do this procedure.
To send the command to the scale and she responds with the weight of the food

Your manual says it is necessary to use a communication protocol
To obtain the balance weight.

The application sends to the balance via the serial port:
[ENQ]

[Ppppp] = Weight field consisting of 5 ASCII characters, the first two characters being relative to the whole part of the And the other three to the decimal part. All zeros on the left should exist;

If you can help me, I would appreciate it.
A friend hug
Edson

Maybe try looking on the forum;

You can connect scales to SambaPOS by configuring a scale from Management > Local Settings > Devices [image] My Scale is CAS ER model. To configure port click Settings and choose the port your device is connected to. [image] When a scale connected, scaling automatically updates Number Pad value. So when you add a product quantity value becomes scaled value. [image] Custom Scale If your scale does not listed here you can try integrating it by using “Custom Scale” option. To be able to ma…

The Brazil sends you a hug

I want to split the bill from the table.

In 2 or more people and print in ticket

I found a topic related to this but did not work

Yes we’ll print on bill. What I’m trying to understand is how would you like operator use this feature because there are more than one solution. Let me give an example. (Test it with 4.1.15 release) [image] I’ve added this line to bill template. [<J10>Payment By Guest:|[=F(TN('{TICKET TOTAL}') / TN('{SETTING:NUMBERPAD}'))]] It reads numberpad value and prints ticket total divided by that value. So if there are two couples you can enter 2 and Print Bill button. [image] This is what it pr…

When I add the command

On the ticket so displays

OBS: Displays the word infinity, not the total divided

CAN YOU HELP ME

THANK YOU MY FRIEND…

You might be better to impliment a ticket covers setup using say tag and use the tag to divide for the split.
Even if it is only on a specific split bill print button.
Something strong like a tag would be more reliable than trying to use number pad directly.

How are you specifying of its a split bill or not in order to show a split amount value?

Something simple like a [?prompt] expression to set the tag before printing would suffice and would mean the value would remain for further prints…