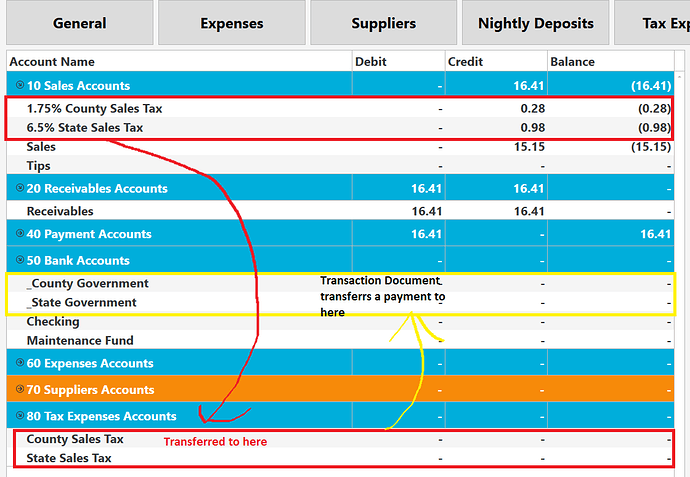 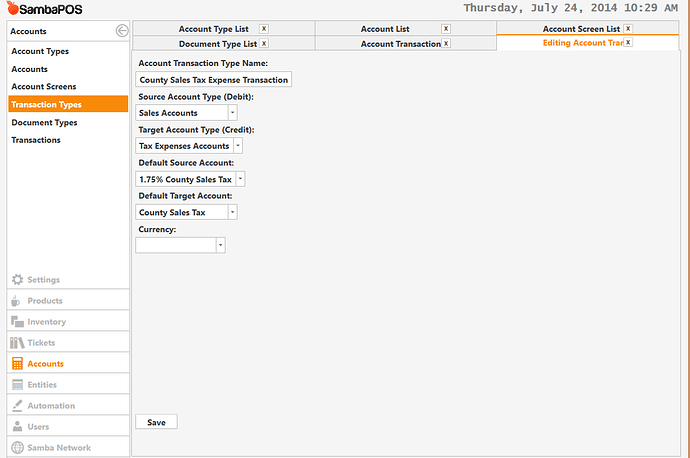 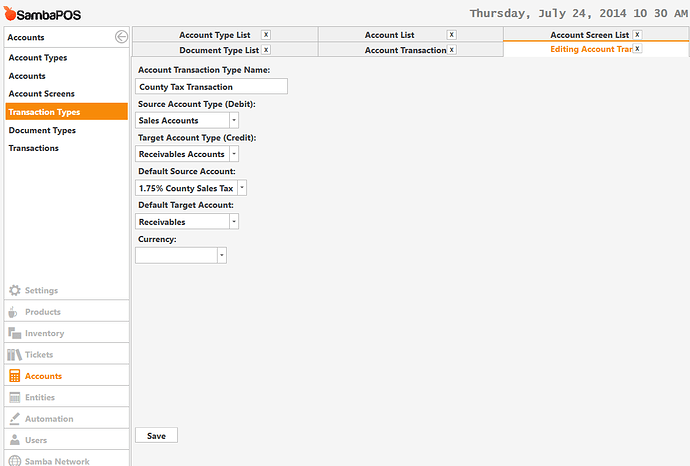 We have two actions to automate creating account transactions.

For example you can create an account transaction when ticket gets fully paid. On Ticket Closed rule you can read tax value with {TAX TOTAL:X} tag. X will be the tax template name. For example {TAX TOTAL:1.75% Country Sales Tax}

I am completely stumped. Cannot figure out how to do what I need. I have tried just about everything I can think of. I am either doing something wrong or missing something.

I understand that part. What im having trouble with is getting the Action to pull the “Amount” from the correct account to make the transaction.

So I made an action for “Create Account Transaction” called “State Sales Tax” and am calling it on a “Payment Processed Rule”. It works fine if I input a set amount in the action like 2.00 but I am having trouble getting it to pull the Tax total from “6.5% State Sales Tax” account. Forgive me I learn quick but I am not familiar with what to type into Amount on the action and how to call it from the Rule.

Here is how my action and rule are setup: 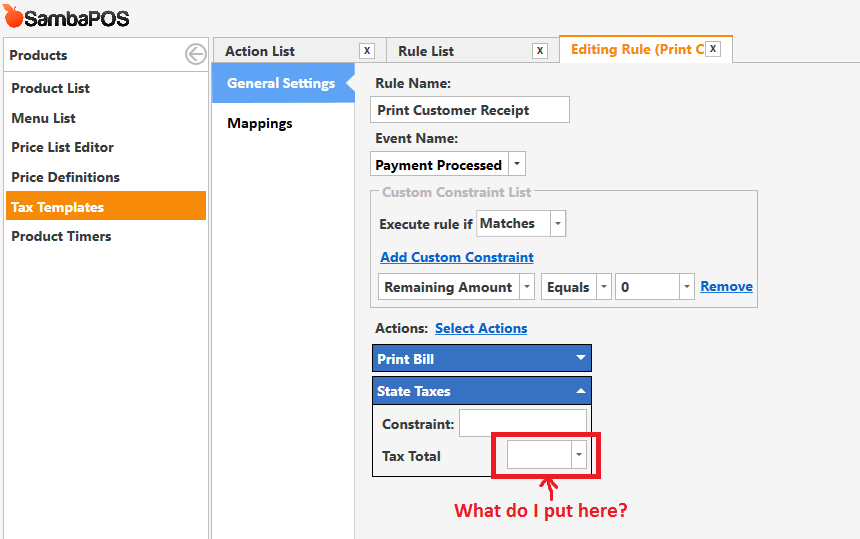 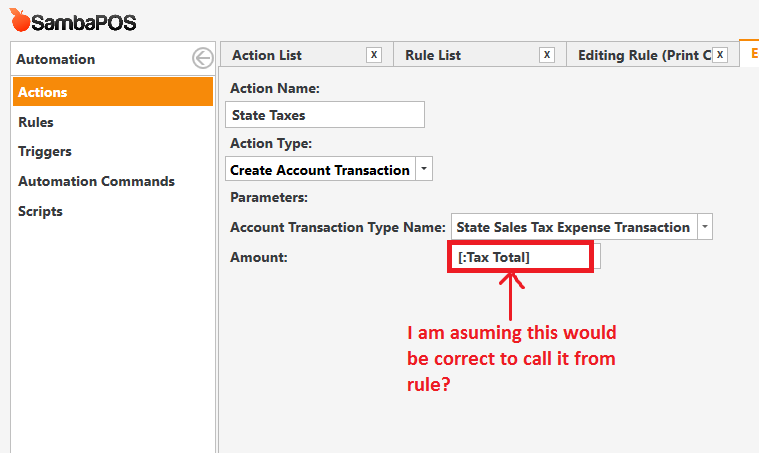 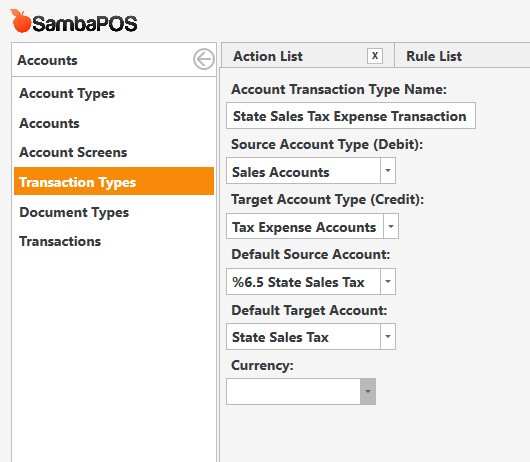 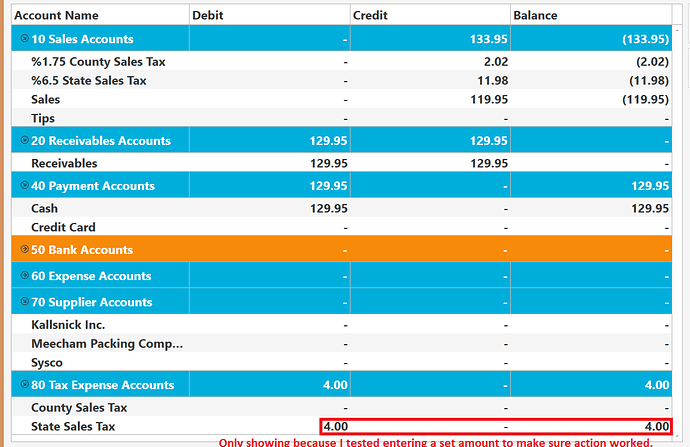 In your Rule you could use a Printer Template Tag to retrieve the value of the Tax, such as {TAX TOTAL} or {TAX TOTAL:X} (where X is the name of Tax).

You will need to wrap it in an expression, and a function, as such:

{TAX TOTAL} Works but it puts the total tax for both state and county. I need it to only put state tax or only put county tax for each action. I tried {TAX TOTAL:State Sales Tax} State Sales Tax = My state sales tax template name. It does not even generate the transaction if I use that.

I tried just using {TAX TOTAL:State Sales Tax} in the Amount box for the action and it would not work. but {TAX TOTAL} does work it just doesn’t pull the individual tax it pulls the total of the two. I am either missing something again or something is not working. I cannot understand why {TAX TOTAL} works but {TAX TOTAL:X} does not

The format you listed does not work at all.

Ran into another problem:
My Actions: 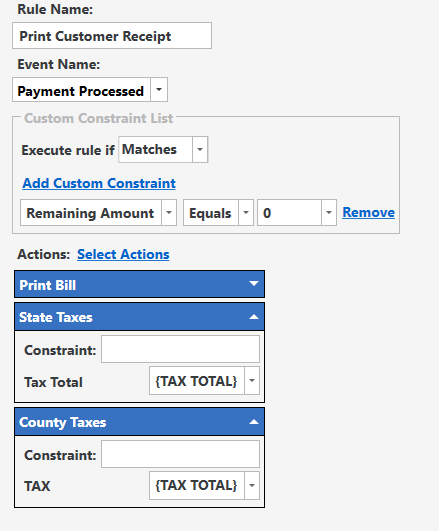 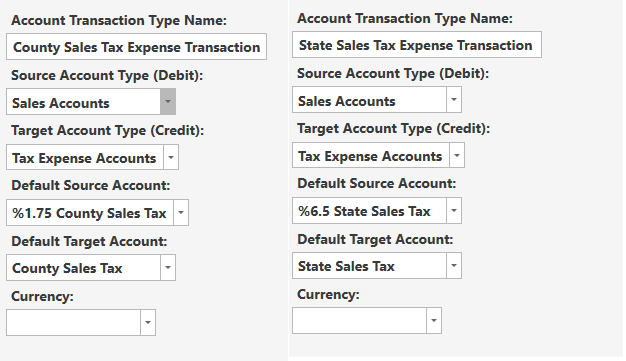 I am using {TAX TOTAL} to test because the expressions you told me to type did nothing and {TAX TOTAL:State Sales Tax} did nothing.

Now with this setup it does take the Tax Total and it puts it in the County Taxes account and it does create the County Tax Transaction but it does nothing for the State. Either I have not figured out how the flow of this process works or something is broken.

Here is what happens with this setup I just posted. 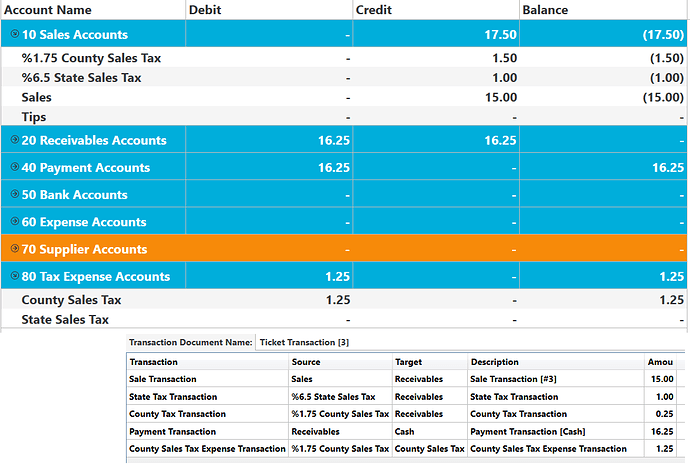 As you can see another issue has come up as well. It is adding 1.25 back into the Sales account for county sales tax. That should not read 1.50 it should be .25

Why would it do that for this transaction but not the one that moves it to receivables.

Basically I dont want the Tax to actually be moved into Tax Expense Accounts I just want it listed there like it does when it moves it to Receivables. I understand its moving an amount to receivables because of a payment transaction.

Interesting. {TAX TOTAL:X} returns zero, as does {TAX AMOUNT}. For some reason they must not be accessible to Payment Processed event, which makes no sense to me since {TAX TOTAL} can be read without issue. 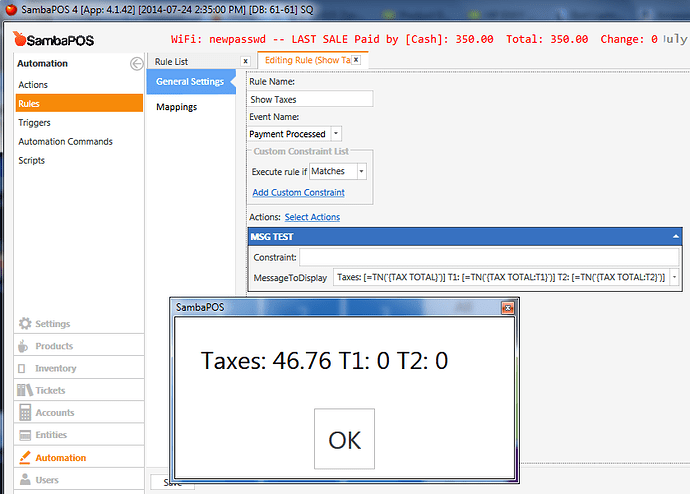 However, I refuse to believe this is not possible.

Could you move the Tax accounts out of the Sales Account Type, so that they don’t mess with Sales or Receivables?

I could but the reason I want them listed in sales is for a visual reference of my total sales and the tax/tips included. I want taxes to also show into my Tax Expense Accounts so I can make payments to my government and track them. I don’t want the actual Tax amount that’s listed with sales to change. I also want Taxes included in my receivables otherwise it would not be accurate.

It must be hard coded or something how Receivables works. Because it behaves differently than a regular account that I make. The tax transactions i made puts the taxes into receivables but it does not affect the Accounts under sales. Thats what I want it to do for my Tax Expenses accounts.

Ok, understood. Maybe go about it another way, such as storing the Tax Amounts in separate Ticket Tags on event Order Added, or Settle Automation Command event. Let me try that…

Sorry that should be {TAX TOTAL:EBT}

I don’t know why I didn’t changed syntax here… Sorry for the confusion and let me implement a specific tag for that.

I think I kind of understand why its not working the way I want. The tax transactions are going into Receivables as a credit from the sales account. That happens once… so it shows the credit under sales and the corresponding (balance) It does not list anything from debit because the sale does not actually put it there. So I understand that part and why my structure is not working… I guess What I am asking then is how would I mirror the Tax amount into my Tax Expenses account. Or is there a way I can read the tax amounts and put it into my Tax Expenses Account without messing with receivables or sales.

Is there a way to do a transaction without using a source… Example if I wanted to just put money into my Tax Expenses Account without taking it from a different account. And use an action or rule to specify the amount by reading taxes from a sale.