issues in Dine in/To Go Button after Download SambaPOS 4.1.75 and updated the button not work any more

Can you explain a little more. That button is not default feature it is user built. It is more than likely something else causing it. 4.1.75 works just fine with the button as laid out in the tutorial I have tested it. So your issue may be something else if you can explain more or give us more insight we can help you figure it out.

1st what part of the button is not working?

2nd Check your rules, and actions make sure no changes were made.

3rd check your Ticket Tags make sure no changes.

Be sure mapping is still set correctly for rules and automation commands.

Interesting. Mine is broken too. It works on 1st click, but successive clicks have no effect. The Button isn’t updating properly - it isn’t Toggling! 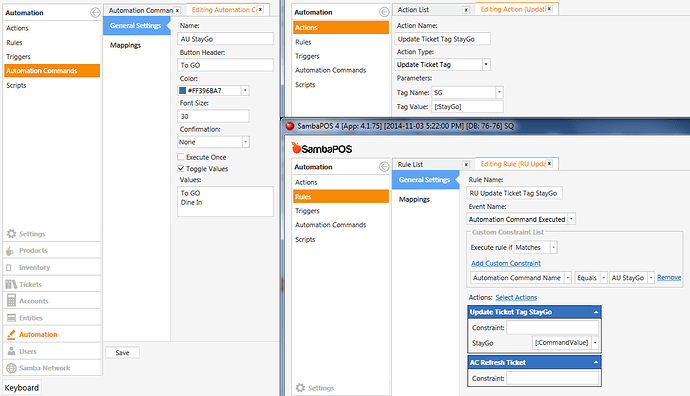 Very strange fresh import of it and mine is toggling. I just tested to be sure. Its toggling.

EDIT: Ok i was wrong it is toggling if there is no active ticket yet. Soon as I add an item it stops toggling. Maybe that helps you @emre

I’ll take a wild guess to say it has something to do with the non-requirement for “hard-refresh” @emre mentioned, which came about in v4.1.75 via this discussion regarding Automatic Customer Discounts:

Important Note: I’ve added Hard Refresh Ticket action to refresh order display but it won’t work for new created tickets and we shouldn’t refresh tickets as demonstrated there as it basically closes & reopens ticket. On next version it will automatically update order lines after entity selection so no refresh will be needed.

I’ve uploaded 4.1.75 and it should work fine without Hard Refresh Ticket action.

EDIT: I removed the Refresh Ticket Action from the Rule, and the Caption on the Automation Command Button properly toggles between To Go and Dine In, on the second try, and each successive click, unless you add another Order Item, then you need to click it twice again for the Caption to change.

Unfortunately, the Ticket does not properly show the current value for the Ticket Tag.

However, the Print does show the proper Tag Value.

I just tried using Ticket State instead of a Ticket Tag for this, and I have the same results as described above.

I’ve uploaded a test release for 4.1.76. Can you please let me know if it works fine or not?

SambaPOS is a Restaurant POS Software. It runs on your PC and supports most widely used POS devices such as tablets, touch screen monitors, thermal printers

It also has something to do with the Toggling of the Automation Command.

I just tried a different method where I do not use a Toggle; instead I use Ask Question, then set the State (likely works with Tag as well) to [:CommandValue] coming from the Ask Question, and Refresh Ticket. That works just fine.

I’ll give the test release a try…

Sorry was away for while after i posted. Good to see it was fixed. When I thought it was working as normal I was just doing a quick test and didnt think to actually add an order as it didnt dawn on me that it would be different.

PS @emre i see the fix for reports was in this as well. I am very happy that was annoying.

i see the fix for reports was in this as well. I am very happy that was annoying.

Great to hear that. Doing it without resetting actual layouts was a little challenging

It works after updating to 4.1.76 thanks alot I do appreciate