Is it just me, or is anyone else having strange behavior with the Forum?

I cannot copy from Paint and hit Ctrl-V to paste an image in the message box anymore… this bothers me greatly.

And when I hit Reply, my cursor used to focus to the message box, but now it does not… I need to click in the box before I type.

I’ve noticed some editor shortcuts changed. That bothered me…

I’ve noticed some editor shortcuts changed. That bothered me…

Used to be Ctrl-K for code, but now it is Ctrl-Shift-C … what a PIA that is!

On my firefox focus seems working fine but unfortunately pasting images does not work. Hmm… hope they’ll fix that soon.

unfortunately pasting images does not work

I just highlighted the above and click Quote Reply. It put the quote in the box, but my cursor was not there.

And not able to paste images - I cannot live with that and expect to provide expeditious support using screenshots here.

Guess I need to DL Chrome… I really like FF.

My cursor works fine but your right I cant paste screenshots either. Im in latest firefox. I just downloaded FireFox for my iphone even lol.

Using Chrome now for this site only.

I can paste Images no problem.

The cursor/focus thing is still driving me crazy.

And the changes in KB shortcuts is making me mental.

I am having way less fun than I used to. Implore them to fix this, or revert the changes… they are behaving like MS by moving stuff around and changing it for no reason when it worked perfectly fine before.

I’m watching it. Seems like they’re working on it.

Why the editor functionality was changed?

I noticed that couple of days ago, the Insert link functionality is broken. Then I started to notice that there are other broken functionality as well: Links Quotes Code Basically all previous shortcuts are gone. Besides that, if you select a...

Can’t revert as I may miss a critical update. I hope they’ll fix that soon.

Hmm, ok that isn’t going to change to the way it used to be. Ctrl-K for code is never going to work again…

Would be great to preserve browser conventions, and ideally have shortcut keys that replicate those of very popular apps such as Gmail, Google Docs or MS Word. I’m referring in particular to:

We should definitely normalize on keyboard shortcuts as seen in other popular web apps.

Unfortunately, even Ctrl-B and Ctrl-I (standard for bold and italic respectfully) behavior has also changed… in fact, they don’t work at all as of this posting - I need to use the buttons instead Hopefully they fix that.

Even Ctrl-Shift-C for code does not work, at least in Chrome - instead that shortcut brings up the Chrome Dev Interface.

Yes, copy/paste works in Chrome. But in FF 42, you cannot copy/paste an image.

The focus issue and standard KB shortcuts are really aggravating me though.

We’ll wait until they release it though. 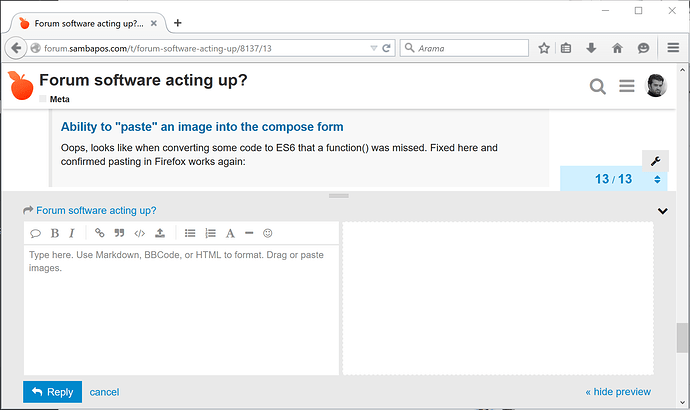 So just when I tried to go back to using FF, I see this. It just keeps getting weirder…

And NO, I did not blur this screenshot. This is actually what it looks like to me in FF right now.

EDIT: ok, too quick to accuse FF. It looks the same in Chrome as well. WTH is going on here now? LOL 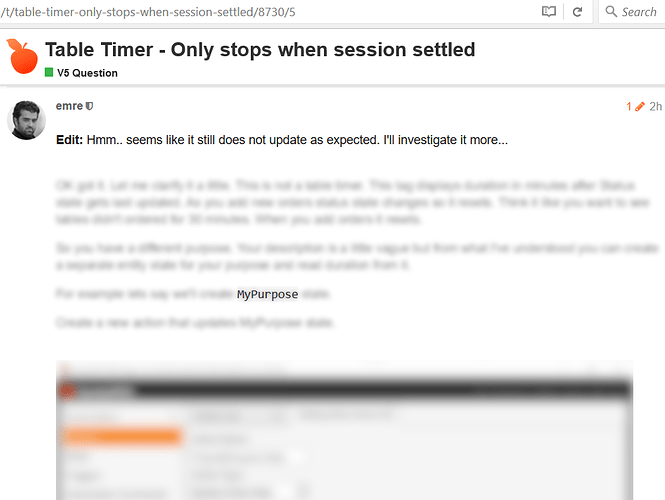 LOL he used the SPOILER tag.

[spoiler]
If you use the tag it will cause it to blur until you click on it.
[/spoiler]

Good to know. Thought I might be going crazy. And I haven’t even had a drink today…

lol. I tried to temporarily disable text… Now it should appear fine.