First of all I guess I should explain that we have a gratuity button that automatically calculated 18% of the total. Not sure how I did it since it’s been so long, but obviously it was done with automations, rules, actions, etc. I can provide screenshots upon request. But basically what happened the server added gratuity to a bill then split the tickets and it took away gratuity. It would not let Him re add it either. Splitting the tickets nothing has been modified or created that came with the program. And with it being a 10 top that was very impatient we didn’t have time to redo the bill, it ended up being quicker to pull out a calculator and handwrite gratuity into the bill. If you add gratuity after splitting it stays on the bills you just have to do it to each individual ticket so that takes a while. Any ideas on an easier/quicker way to do gratuity?

It was probably a calculation and with previous versions sometimes splitting tickets would remove the calculation. We would need to know more information with screenshots. what version are you using? Is it a Calculation? Can you show some screenshots>?

How are you splitting the ticket?

Like I said the “split” button was already there I just renamed the button caption. I think it was called “move” but I can’t say for sure. Nothing was changed except for the caption of the automation. And yes the gratuity is an automation as well set to do a calculation. I followed a tutorial to do it I believe we set it up like a 2nd tax that applies when you press the button only. I made rules and actions to go along with the automation command. I can provide screenshots tomorrow if needed. Oh and it’s v5 btw. We didn’t migrate from any previous versions either. After trying out the demo and liking it we bought the license for v5.

You need to build automation to reapply the calculation when you move tickets.

Take a look here it is an alternative way to split tickets and you might like it better:

So this should work without gratuity being affected? Like… its going to work reguardless of when its added, before or after split. I’m going to give this a try thanks. If I run into any problems I will let you know.

I definitely didnt like the alternative settle feature so i reverted back to the backup db i made before trying it out. so lets go back to the drawing board… ill start by posting screenshots. i accidentally lied in the op, i remember i set it up kind of like a 2nd tax, but it actually was a calculation type, not an automation. youll see in the pictures… i just want gratuity to stay after splitting but instead it disappears and we have to readd it. 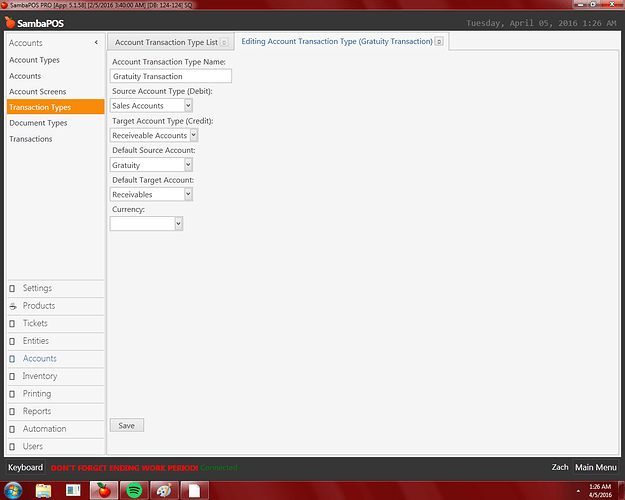 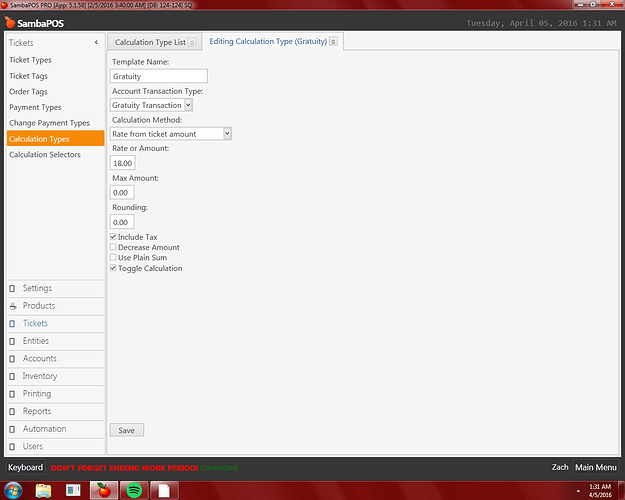 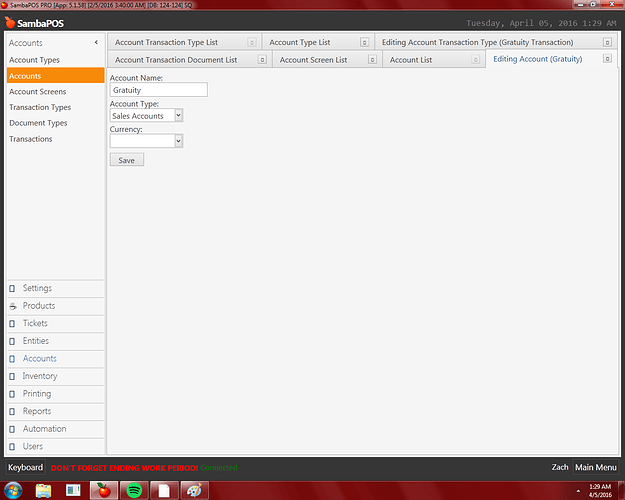 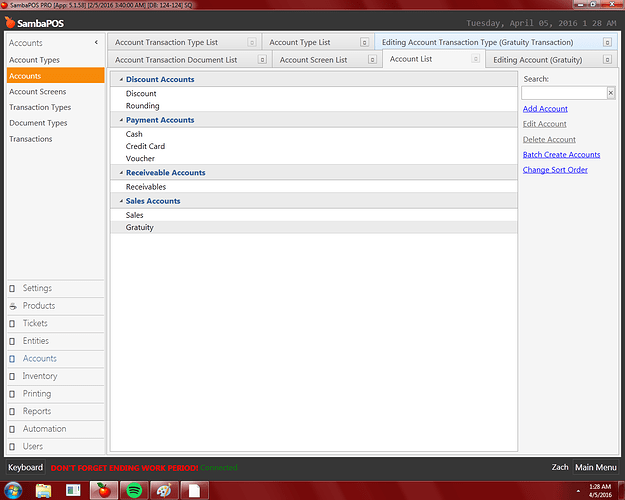 Hmm… still not getting any help

You need to build automation to reapply the calculation when you move tickets.

Kendash gave you a sugestion, he wasnt saying the alternative split was the colution just that you might like it.

As he said you will need to build some form of automation to reapply the calculation.

Why can’t we apply the gratuity and it stay if we split tickets, isnt there some kind of rule or action I can make that would tell samba to keep the gratuity after we split tickets? If we have a 15 top and we need tickets split 8 different ways that can take up a lot of extra time when your staff is not tech savvy. Instead of splitting each order then adding gratuity and printing it would be nice to add gratuity, split then print. We are litterally saving a whole 2 minutes of time here, which may not seen like much, but in a restaurant there’s a huge difference between it taking them 5 minutes to split a big table and it taking then 2 minutes… yes if we have a big table it sometimes does take that long for them to split a table then add gratuity. It’s not a big deal to me, but it was requested by the staff and they’ve been bugging me about it so I’m just trying to make them happy. The owner of the restaurant agrees that it would make their jobs easier so I just want Him to be happy. One staff member had mentioned that at all of their old jobs they were able to gratuitze before splitting, so again, since none of the staff are tech savvy I just want to make samba as easy to use as possible. So far we’ve been able to make it do everything our old program that cost $600 per station did. We have 4 stations so we’re saving $2300 by using samba. Yay.

How have you setup to add gratuity that takes 2 minutes?
You just press the calculation selector before printing, 1 button press.
Either way as ken dash said you can build the automation to do it anyway.

It takes them that long when we have a huge table of 10 or more, which happens at least once a week. And when our staff isn’t tech savvy, yes it does take that long. That’s why we want to be able to add gratuity before splitting and it will be on all split tickets instead of splitting then adding gratuity to each individual ticket it takes up a lot of extra time.

We’ve only been using samba for a few months. (Since January) I’ve been able to figure out most everything on my own but when it comes to actually creating rules, automations, actions, etc. Sometimes I need a little help. And I’m just not sure what I need to do in order to allow us to add gratuity first, then split and not lose the gratuity we just added after splitting. There’s gotta be a way, and like you said… automations, rules, etc. But what do I do?

Its not something I’ve done…
Could make some recommendations in general for improvement if wanted but helpful to know a little more about your flow.
If gratuity on all tickets by default?

Try add action to apply gratuity calculation (you already did this so, please don’t ask how ;)) after move orders action in your Split Button rule.
You may put constraint to check if there is gratuity applied before move or not [=TN('{CALCULATION TOTAL:Gratuity or whatever you name it}') > 0]

EDIT: The constraint I was talking about is action level one.

No. It’s a calculation type. And it’s an automation on the settle screen. We only add it when we have tables of 6 or more. It doesn’t automatically add it.

Thanks I’ll try that and let you guys know

There is a sugestion on auto after move/spilt.

Do you have a covers tag or similar setup?
If so you could also make the 6 or more covers prompt to add calculation.

Will also add, when you are splitting bill are the people specificly wanting their own receipts? If not you know you can just go to settle screen and select orders on the left - although not sure if/how calculations are handled in that flow…

This is the beauty of samba in that there are so so many options to do things.

You could setup a prompt on split bill as to if gratuity should be added.

You could (not sure in v4 but defiantly in v5) setup a rule to prompt to add gratuity is 6 or more main courses are added - my courses tag is semi automatic in that there is a prompt on ticket close which counts mains and says was this X covers. Which also prompts if a main was voided etc saying the corse tag is set to X but see only Y mains would you like to? Leave as X, change to Y or set new value manually.

So so many options

Yeah, Im thinking that might pacify them if I could set it as an automation that is in the ticket screen instead of the settle screen. However, Im unsure how to do this. I dont see a way to tag this calculation to a rule, action, and automation. Any ideas?

You could (not sure in v4 but defiantly in v5) setup a rule to prompt to add gratuity is 6 or more main courses are added - my courses tag is semi automatic in that there is a prompt on ticket close which counts mains and says was this X covers. Which also prompts if a main was voided etc saying the corse tag is set to X but see only Y mains would you like to? Leave as X, change to Y or set new value manually.

The problem with doing this is sometimes people split entrees, we allow this for an extra charge, so we could have a table of 6 but only 4 entrees, therefore the system would not charge gratuity, thats why we have it set up to manually add it instead of automatically. Also, we occasionally have TO-GO orders and that would not need gratuity either, so as for the option of automatically adding it, its not something we would want to do, I think the best thing to do is move the Gratuity button from the settle screen to the ticket screen.

I dont see a way to tag this calculation to a rule, action, and automation. Any ideas?

All automation need rule. You already create rule to apply gratuity. I will not automatically show up there. You done all this but you have to dig hard enough. It is the same thing as you did to gratuity button just do the same on Split button

Not necerserally true, you can map a calculation selector straight into a button can’t you if I remember right?

Calculation Selectors are available on the Payment Screen only. A Selector is basically a “button” mapped to a Calculation Type.

Calculation Types can be fired via a Selector, or via Automation using the Update Ticket Calculation Action. Because of this Action, you can place an Automation Command button anywhere via the buttons’s mapping, which when clicked, fires the Action. So that is how you would go about adding a Calculation Type “button” to the Ticket/POS Screen.