Has anyone done a hotel POS with channel booking in SambaPOS?

Like title said, has anyone done a SambaPOS with channel sales/booking system such as Travago or siteminder integrated? If so, mind to share some ideas?

No, can fairly confidently tell you that no one has or at least if they have hasn’t spoken about it/aren’t sharing.

I am curious that you ask about channels not handeling booking in samba.
So my question is have you made a booking calander type setup in samba?

I have done hotel setups and if you haven’t seen them they are both on the forum.
One only handles current in house bookings - no future bookings etc

The other was a full intergration with our PMS system NewBook which is itself linked to siteminder etc however newbook is the core. Samba is just pos passing sales into newbook. Although samba was setup to know name and details of guest and what they booking (ie if dinner package price list was changed)

I have not made a setup with booking yet. I have a buddy in hotel business and in curiosity I asked him about what is the most important factor for him to choose a software in hotel business, he mentioned channel sales online booking integration so that he can have the customer detailed information correctly from the booking agents. With all the powerful programming features in SambaPOS, I know we can handle tracking of the service flow of hotel mgt pretty OK, however, I have not spend too much time in the web integration support from SambaPOS, but since we can integrate with Google Map, we should able to integrate with any cloud solutions as long the provider give up the API information.

I think after I can master the features of SambaPOS more, I will eventually develop it with more cloud solutions.

So to conclude, this is more like a feasibility study.

To be honest as I have told others - a good PMS would take allot of work and samba is probably lacking some things that you would want like a good calendar interface for bookings.
I have intergrated samba with NewBook PMS which is a PMS in itself with online booking and channel links.
Your issue with intergrating will always be the reluctance of people to give you API access.
It took me a couple of tries to get through to dev department of newbook and eventually got API access after explaining it would require no changes their end as samba would adapt to suite their API.
I have tried some other PMS providers and they were reluctant to offer API details without an existing client of theirs using the software which becomes a chicken and egg situation as if you want intergration you not going to take seperate systems and then work on it you want intergration before switching.
Channels like late rooms are also hard to partner with, Newbook has direct links to several channels inc booking.com but late rooms for example were not very open to new intergrations.
Siteminder is a portal to connect to many channels but is another monthly expense.

Sambapos has support for Google calendar via a module giving you really strong calendar support. Nobody has ever done much with it except me and what I’ve done is limited but I caan say that yes sambapos has very good calendar features.

I didn’t mean there wasn’t any abilities but to create a booking system typical to other PMS would be an enormous task for something that would unlikely match a custom system made from scratch. That’s before taking into account channel integration which would be another huge task in itself.
Also got things like pci for securing card details.
Also I would expect that to get a suitable Callander interface you would probably just embed a html widget of your own interface in which case your just making a separate system which is not really a samba solution but your own PMS.
This is my opinion anyway - as much as I would like it to be viable I don’t think it would currently be feasable.
I’m game for helping anyone who wants to try but it wouldn’t be something I’d look to take on myself.

I found many motels do not necessarily require a PCI compliant system, they frequently have a separate credit card machine. I feel the major obstacle would getting the channels willing to offer API info. I will try when I finish getting myself familiar with programming in SambaPOS. By then probably will need your advice. I will experiment the software with my buddy’s hotel. However, I also have one more pressing project I want to develop with SambaPOS before the PMS.

Wut? This is the reason I mothballed my party bookings system… cos all I could do was list bookings in order of date in ticket lister.

Will have to read back up on this

I cannot comment on your senario re card numbers but in uk typically you provide card details to hold a booking but payment is not taken untill arrival or departure.
This instantly requires PCI compliant storage.
When you say motel are you just referring to walk in bookings paying on arrival?
What happens if they trash the room, do you not keep a card number on record for protection?

In US, many motels use the following method. First, if the booking come from internet booking service, the booking agent(not the motel) holds the PCI information and send a FAX copy of booking unless they are using systems that are directly integrated with the internet booking system. When the customers arrive, they will be asked for the actual cards to be IMPRINTED! Yes imprinted, that old method. Then, if they have credit card machines, the motels will process the first payment using them and use the paper work to hold for further charges.

This happens even in not-so-remote city of Orlando, the homeland of Disney, not to mention other tourist areas up in the mountains. LOL

Fair enough, but the main hurdle would be a user interface which is user friendly.
If it was viable to have a nice calander layout with days accross and rooms virtically like 99.9% of PMS

I would personally disregard any system which didnt utilised this type of layout.
Here is the chart view in NewBook; 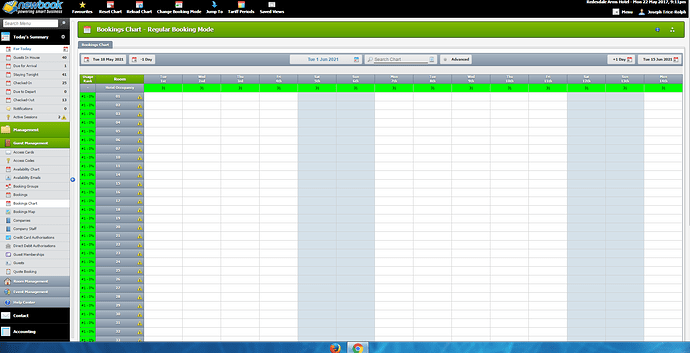 Jumped to 2021 to not show guest names

Using google calendars… maybe you could group events by room allowing you to ‘render’ something like this but by that point you might as well just make your own tables/system as you would only be using google as data storage.

If someone wants to make a sugestion Id be eager to hear it as this would be something which would add value to potential systems for sure.

I just realize in order to develop a new PMS for someone who already have been using PMS is a huge task we it will also need to build import/export facilities compatible to his/her old system to exact all the data.

Yep…
Depending on qty of bookings it may be easier to manually transfer.
2 of us spend 2-3 days transferring all the bookings when we switched PMS last year as wanted to be sure it was transferred corectly.
I stand by my current point of view that curently it’s not quite viable and taking a seperate PMS package and intergrating EPOS side with samba is best route for now.