Help with SQL to create a price check button

So i want to create a button that when pressed opens a box to “scan” the product barcode, and for this to then display the price (and eventually possibly other info like current stock level)

ive never used SQL or script before so really not sure where to start, ive googled SQL to try and read up and think i need to use the WHERE clause as my reading tells me that function is for extracting records that fulfil a specific condition

So my idea is:

The script i setup is probably very obviously wrong but i have never done it before so dont know what info is required where, and then im not sure how to call it in a rule to display the price

This is the script 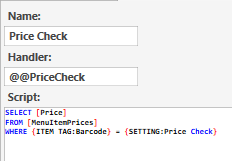 am i anywhere near on the right lines? any help to sort would be great

I offered a starting point for the SQL query on another thread.

Believe you will need to use script or report SQL details report with an sql query something like this; SELECT p.[Price] FROM [MenuItemPrices] p LEFT JOIN [MenuItemPortions] s ON s.[Id] = p.[MenuItemPortionId] LEFT JOIN [MenuItems] m ON m.[Id] = s.[MenuItemId] WHERE m.[Barcode]=1234 AND s.[Name]="Normal" On the presumption your only using normal portions and a single price list. NOTE this query doesnt work, think it needs tweeking due to the [Name] column being used in multiple tables of the …

You will need to join prices to menu items which will also involve portions and potentially price tags.
As you will know portion is seperate to barcode as a product level detail so likely this will always be ‘Normal’ so next point is price lists if you have more than one.

That was how far I got but have multiple price lists which I think is what was causing the issue I was having.
As a non retail person without a scanner in any of my systems I didnt push further but is a starting point.

@JTRTech is going about it the correct way with his SQL query.

So your query is not so direct as you might like, and you need to link (ie. JOIN) multiple DB Tables together to retrieve the information, and have multiple constraints in the WHERE clause.

If you don’t need to worry about PriceDefs, then joining 3 Tables as JTRTech has done will suffice, otherwise you will need to join a 4th Table and constrain the query further with the current PriceDef in use.

so with putting that in a script how do i link this to the auto command button to search the barcode entered and display the price in a display message action?

Ive only ever done in a jscript by having the query in a text string with …sqlstring’+variableName+'sqlstring…
Where the variableName is a value fed into the jscript.
Like this;

i just dont understand it, never even looked at sql until last night when i started reading about it. Dont get how it works and no idea about how to use it in samba to run a script and display the result

Might have to just give up on it lol

That is really surprising given complexity of some of your setups…

Might have to just give up on it lol

Dont do that, youll get it and with scripts and sql you can do such great things.

i know lol, ive just never ever used sql before so i dont really understand it, so in the script you posted:

Do i just add that as a new script under automation and call it Price Check for example, and put the handler as @@PriceCheck?

And also the 1234 is that as if the barcode is hard coded to 1234? and in my case as im using a program setting to store the “barcode” scanned can i replace 1234 with {SETTING:Price Check} so the script would be

SQL is not hard it’s fairly easy to hack some queries together. Just spend a little time and you will get it.

and what needs to go in these fields in the execute script action?

I assume function is the name of the script to run?

setting to store the “barcode” scanned can i replace 1234 with {SETTING:Price Check} so the script would be

Is you use jscript rather than direct SQL you can call with {CALL:xxxx} expression and feed values into the script.

This is one from my PMS intergration; 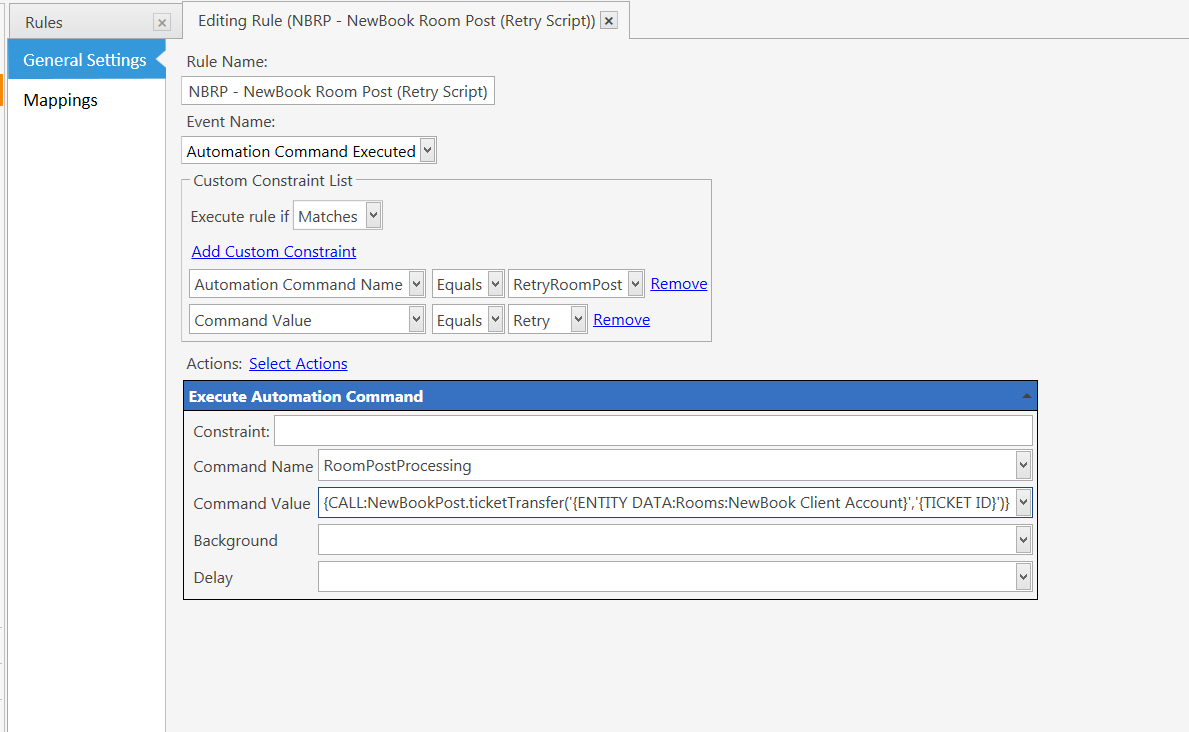 NewBookPost is the script handler.

TicketTransfer is the script function and within the () is variables.

In the previous example it would be;

Its not best example as is a script used by another script so {ORDER ID TAG} isnt valid tag.

I like the {CALL:xxx} method over execute script as the returned value goes into the action or place its placed where as execute script wouldnt return values to the action, you would have to either trigger the resulting automation from within the script or put in program setting etc.

and what needs to go in these fields in the execute script action?

You should be able to do that without JScript.

The Function field is the HandlerName, in your case @@PriceCheck.

In the case of executing JScript, Function field needs the JScript HandlerName and the FunctionName within the JScript handler.

The Parameters field in the case of SQL is a comma-separated list, so you should make that a [:variable] that you will populate from the Rule to feed in the BarCode.

In the @@PriceCheck script, you access the Parameters via an @indexNumber, so the SQL script would become the following (notice the @1 which is the first value of the Parameters list):

@QMcKay can you show example of calling the script when doing direct SQL script?

OK so i updated the script to be: 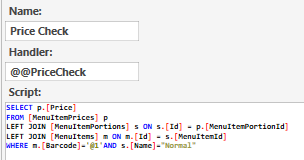 and i have three rules:

The SQL script wont update the program setting if thats what your thinking is happening.

Using a script and {CALL:xxx} you only need one rule and one action; 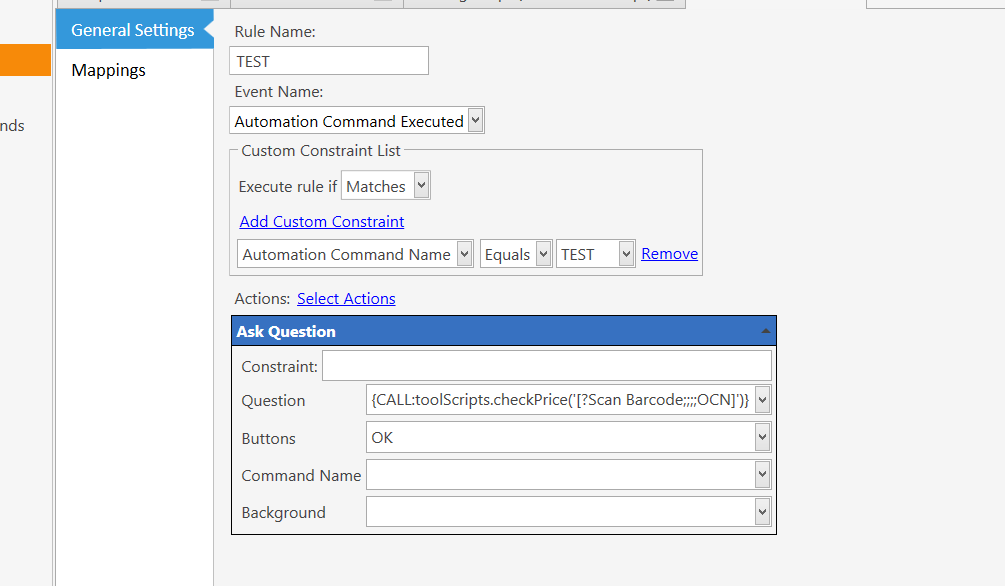 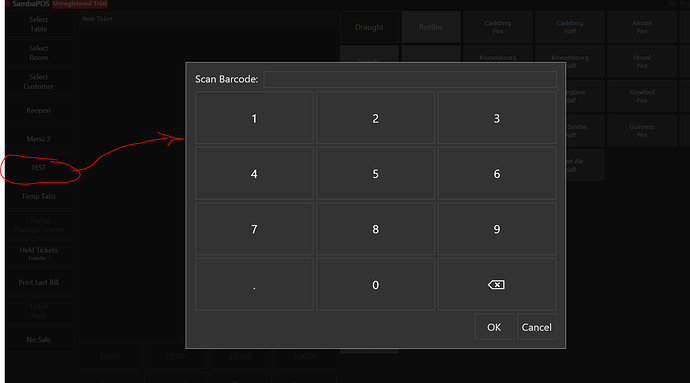 No Settings.
One script,
One rule,
One action.

Dont suppose theres a way to display all portion prices, with an addtion to the script?

so the script just uses the portion Normal, is there anyway to change it from saying Normal to a value that displays all portiona, or can i just add my different portions as a comma separated list after Normal?

I tried that but doesnt seem to work lol