Hmm... what do you think about this?

Something I’ve been working on, using PHP and mySql. 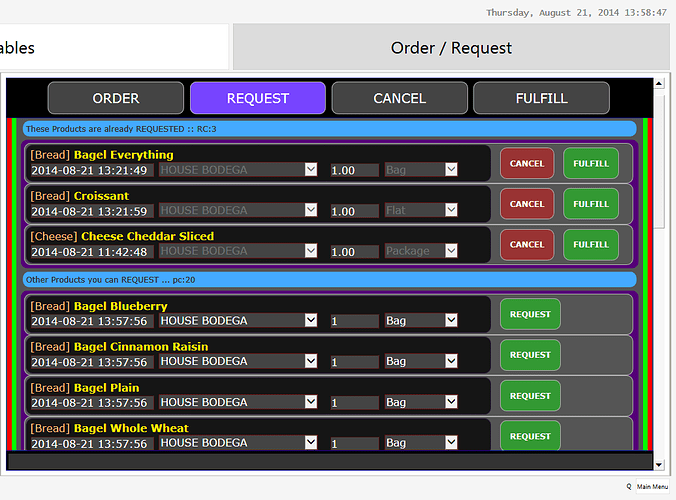 Lots to do yet… and then integrate it into SambaPOS SQLexpress DB.

Looks awesome… Where are you planning to use that?

At the shop, my employees write lists on scraps of paper for things that I need to supply from my home storage room. All too often, I end up at the shop not knowing what I was supposed to bring with me.

With this, they could make requests on the POS and it could send me a message, or at the very least, I open the website while at home to see what has been requested, and gather items before I leave. Take my iPad down to the storage room, pack up the supplies and touch FULFILL.

Ideally, this would transfer inventory stock counts from Storage to Shop, and eventually I could track usage at the shop (from recipes) and in home storage item counts to know when it’s time to order from the supplier.

That’s awesome. I am slowly working on something similar but its simply an easier web based system for entering inventory. It would use drop down menu for my items etc. Plan to integrate barcode scanning and labeling for my retail business inventory.

I am not a seasoned coder though so it will take me a while.

I would love to see that @Jesse. Entering inventory is a pita right now imho. That’s where I’d like to go with this as well, eventually.

My code is very linear and old-school. It uses simple functions, no classes, methods, etc.

@QMcKay do you access it through Internet? Brilliant idea and I think far better solution than just relying on inventory reports…

Edit: Really liked it. Just imagined to send notifications to related people. Do you mind if I steal that idea?

Yes, it’s accessed through internet so I can check the order/request status anywhere.

For sure, take the idea… anything to make SambaPOS better and easier to use is always a big plus!

Something else I have in my plans eventually is to build a custom Accounts Display screen using PHP. The current accounts screen is good but its more of an operational view of how the accounts work. I would be building a screen that operates via PHP/Web for viewing accounts in real time and have it auto update…

It would allow me real time access to view restaurant activity while I am away without having to expose my Database or Samba to the internet.

It could also be customized so it shows a more traditional Accounts view vs the transaction Credit/Debit system.

Technically you could even use this to pull and merge data from MULTI site setups. This would be a secure way to deploy a central office type system without exposing your database or Samba to internet directly.
And just like SambaPOS it would be very flexible.

There are endless possibilities with this sort of integration. I am sure there are other options vs PHP but PHP is rather simple, easy to learn, and its always been stable for me.

I’m waiting for your future sure great job!!! Genius!!!

PHP and the HTML viewer widget can be a VERY powerful tool for SambaPOS. Its a hidden gem for integrating services into your business. You can virtually do anything with it because of how well the database is built around Samba.

But there are apis for Samba’s database?

Evolving over time. We are actively using the Request portion of this system and it tracks stock levels at my home storage room. 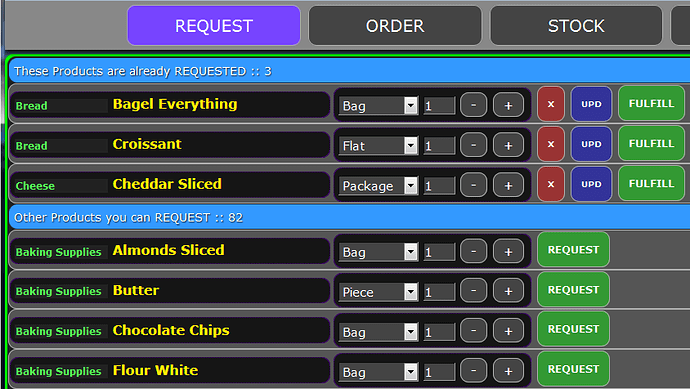 So right now the products are hard coded? Or is it pulling it from the sql? BTW I have my inventory entry code working. I just need to create a decent looking front end for it. This is the portion that takes me a while. I looked around to try and find something that I could use kind of like a template I would just modify and use instead of creating it completely from scratch but the ones I did find were ugly so I am doing it from scratch. I think I will be able to make something decent I am good with design its just the coding that gets me.

If I see code I can read it and learn the logic and typically I catch on fast. But creating something from scratch takes me forever because I do not know many methods.

Love your layout how did you do the buttons if you dont mind me asking? Are they Vector?

The products are not hard-coded, but they are in a separate database (MySQL), at least for now, so there is no tracking of stock-depletion by sales.

All the layout is done using DIV and CSS…

Very nice so its more basic even than I thought. Very good design I must say.

When the public code on Github?

I could share the code, but provide no support for it whatsoever.

I’m not a developer per-say, so…
I don’t know how to use Github or any CVS for that matter, and…
The code is chunked together from a design I did 10 years ago for a CMS (still used on several sites), which I’ve expanded and hacked up to support a rudimentary Inventory System, rather than starting from scratch, plus…
It is very poorly documented. To add to that…
Even though I make every attempt to code in a modular form, many pieces are custom hard-coded for my own needs.

Even though I use NetBeans IDE, I’m not really familiar with how it’s supposed to be used properly - as a result, it’s really a bloated text-editor with code-completion, syntax highlighting and FTP functionality. 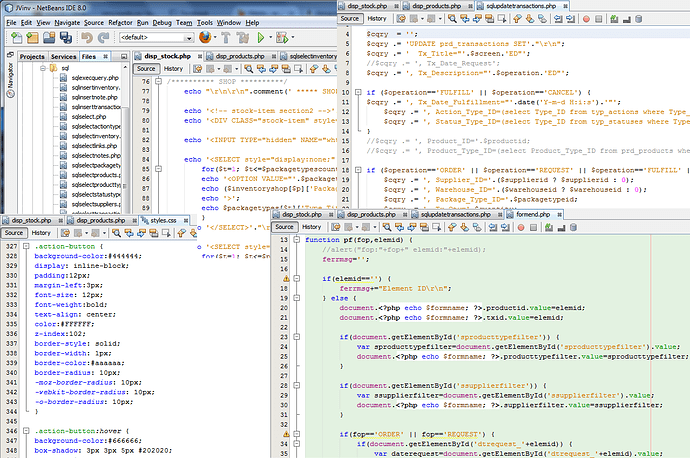 Got this screen functioning properly, and added filters…

Seems PHP dropped built-in support for the mssql extension a few versions back (5.3?) so a 3rd-party extension had to be used (built by MS). Unfortunately it hasn’t been updated to work past PHP 5.4 ! So I had to locate an “unofficial” extension that works with PHP 5.6.

And of course, the syntax is completely different… I guess it doesn’t always pay to stay up-to-date with the latest versions of some things, like PHP.

I was about to ask if @emre could make SambaPOS support MySQL instead LOL!

If anyone knows a simple, straight-forward way to work with PHP 5.6 and SQLEXPRESS, I might try it, but for now at least I have connections and queries working.

Anyway, now I can finally work on stock depletions by Sale straight from SambaPOS DB.

Personally I have always preferred PostgreSQL over SQLEXPRESS and MySQL. PHP works beautifully with PostgreSQL.

Side note that is good to know I did not realize that either. The only PHP I am messing with right now involves the API in TimeTrex and my TimeTrex is running off PostgreSQL. I have not delved into integrations with PHP and SQLEXPRESS yet.

EDIT: Wow your right… the last released drivers were in 2012.

EDIT: here is some communication from MS on the subject… it was from 2 months ago this year.

EDIT: Look here someone has released a working version for 5.5 not sure if it works for 5.6.