How can i make my Sub cumputer to Main

Sorry if it was already asked but i didnt find any info on this,

I have a main computer that i wanna switch with the Sub.
But if ill disconnect it the SambaPos on the Sub will keep crashing or wont start even.
There is a way to make the Sub as a main? like define it as main and keeping all the Database as it is?

So you have computer A and it is running the database server. All other computers connect to that database. If you shut the computer down that is running t6he database then the others cant connect to it. If all you want to do is swap names then it doesnt matter which computer you use.

Just change the name of each terminal in SambaPOS. There is really no such thing as a main… you can name them anything. One of them runs the database though.

Yeah the computer A is the main basicly,
I have another one connected and i wanna make him as the main.

So i just need to change the names the iv putted in the strings?

No keep that the same. Why are you wanting to switch? SambaPOS doesnt see any terminal as a Main.

Cuz i wanna use the B computer and get rid of the A.

But i cant since if A isnt connected B wont turn on i mean the SambaPos.

Ok so you need to backup your database and then install the database on computer B then make sure computer B connection string is correct.

So install SQL Express 2016 to computer B. Backup your database from Computer A then import the database into Computer B and set your connection string to connect to the new database.

Have just done this myself, its no biggie.

When you are closed, run a backup and put it into a shared folder or USB.

install SQL onto the new “server” till and change the connection strings in all of your terminals to connect to that terminal instead.

Install Message server and change the name in all terminals to connect to the new terminal.

IF you use a shared printer via USB, make sure all printer templates are pointing to the correct printers (This was a ball ache for me as the receipt printers had to be manually installed)

Thank you guys so much,
Im gonna do it as soon as the rush hour is over!

so i found the way to backup and somehow to do restore but now it show me this: 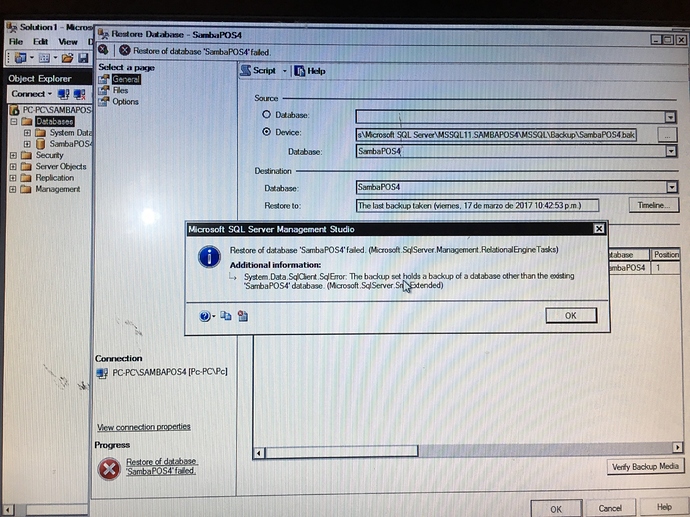 Sorry for the spam, but I deleted what iv created and did a clean restore and it works.
Hope i did it good since I already charged with the new setup.

Thank u so much !

you shouldn’t have had to backup through SQL unless you didnt have the backup module?

Since I don’t know how it work I had figur it out on my way and somehow I made it,
Just needed to do -> task -> then backup
And transfer it to the backup folder on the other pc.
Than open it tho I did a mastake naming the database with the same name so it did some errors but i just deleted all and did the backup with another name.
Works like a charm! Thank u