How do I change item quantity in a ticket

You cannot set the Quantity in decimals. You would need to instead set the sale price per mL or similar.

The same goes for tracking inventory. If you sell in portions of a Litre, you must define mL as your Base Unit, because fractions are not allowed in the Base Unit.

Thanks that makes sense, So I just need to change the multiplyer to more than 2 digits as at present it wont go past 99.

I will have a search in the forums unless someone replies and beats me to it,

Thanks for the reply

Ok to answer my own question.

Change the constraint to add another \d … [?Enter New Quantity:\d\d\d?:{QUANTITY}:N]

Thanks me, Im learning lol

Hi all,
At the top of this thread @Jesse had mentioned using a button on a selected product to “re-order” an additional product by using the Add Order Action and passing the Menu Item Name into it.

My current issue is trying to get Menu Item Name from the selected product. Using a debug message action I created to test what is getting passed into other actions (and for testing rules that I have created that may or may not be working as intended), when I pass in [:Order:Menu Item Name] or [:Menu Item Name] I get a blank in return.

Through some experimentation I have made the assumption that with the order line selected I have access to it, as I was able to unlock and update the quantity of the item.

This forum has been brilliant for its tutorials and have helped heaps with the two builds I have made so far.

Try {SELECTED ORDER} and put it as command value

Thanks @Jesse for your time and effort, tried what you had suggested but no luck I’m afraid, also tried with {:SELECTED ORDER} and [:SELECTED ORDER].
On the chance I may have missed/messed something I will post my automation command, actions and rules (a second pair of eyes can help sometimes) 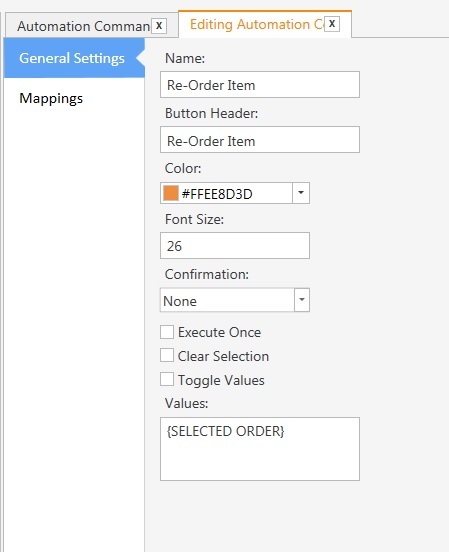 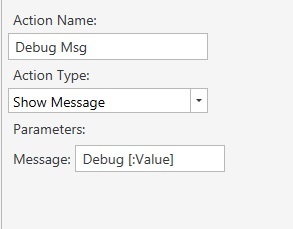 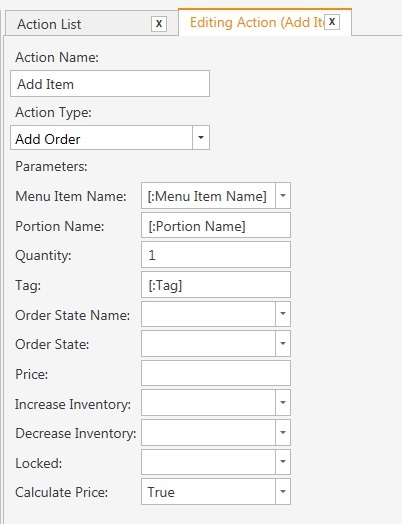 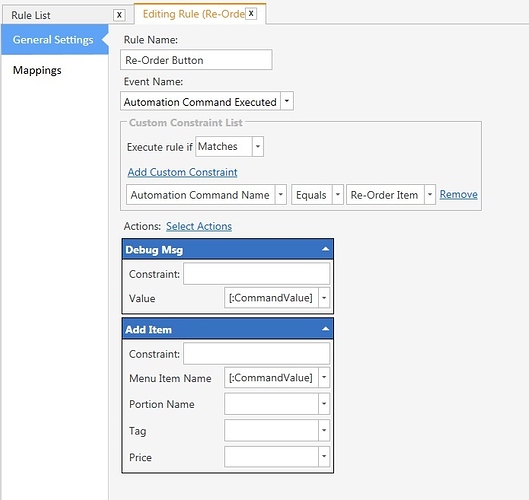 Put {SELECTED ORDERS} in your show msg too for debug to ensure its passing it.

PS I have never really tested this but I would think it should work.

I think thats what @Jesse wanted you to do

So in the screen shot of your add item action below where you have the field Menu Item Name remove [:CommandValue] and put {SELECTED ORDERS} there instead

@RickH Yeah that was what I had initially done, but I was only getting the ID value from the orders table i.e. I had the number 4014, so I figured if {SELECTED ORDERS} gets me the ID {SELECTED ORDERS:Menu Item Name} may return the name. Passing the ID into the add item action yielded no results.

Thanks for jumping in and trying to help though.

So its working to select it. That means the action to add order is not adding that order. So maybe the action I not setup fully correct. Are you trying to do this on a paid ticket?

At the moment I’m trying on and unpaid ticket, but I will want it to work on a paid ticket as well. The premise of the idea was for a more complicated order i.e selecting multiple order tags for one order it would be easier for the wait staff to select the desired order and add another one to the current ticket.
I would like it to work on a paid ticket for the reason that the place I want to implement this will have a pay as you go lounge/bar but then patrons may wish to move to the restaurant part and reorder something that they have ordered at the bar.

If you plan for it to work on a paid ticket then you need to use the Reopen Closed Ticket action to open it and add more orders. Instead of this I would make it create a new ticket and simply copy the selected orders over to new ticket.

I have altered the work flow for my tickets so that the ticket will stay open once it has been paid. I had then added a clear table button to close the ticket once a customer has finished and had left. The idea being that a customer can pay for their order and then add to it later on.