How do i clean my databse

After some days my POS is become so slow. So anybody advice me to clean the previous data (only transaction) from the database. How do I clean my all or part of transaction?

How do I clean my all or part of transaction?

Olny thing available is clear tatabase transactions database tool.
This will reset ALL transactional data and is usually used to clear a new system after building and testing before going ‘live’.

HOWEVER to be going slow after ‘SOME DAYS’ although dont say how long, sugests other issues.

What are you using for your database? CE, LocalDB or SQL Express?

I don’t know how do I use database tool. When I install database tool (trial Version) from Samba Market I have not get anything in the POS dashboard. Please give me the instruction.

My database has been going on for six months (approximately). And here I use SQL Server.

Are you using full SQL or CE version, minimise your window and in the title bar at the of the version your using it will say CE or SQL

Theres probably a lot more going as 6months of data shouldnt affect the speed at all. People have been using samba for years with 10’s of thousands of transaction with no issues at all with speed

I know that before installing Samba POS I install Sql Server by downloading from there official site. I not know more this. Now I am going to install Samba POS newly. So give advice what should I do with this for it’s better performance and how do I enable to clear transactions from the database.

Simply reinstalling the software will not change anything and if you an issue now after only 6months then you will have the same issue in another 6 months. We need to find the root cause and fix that

It could be that your PC needs upgrading, it could be something else but first lets establish which version of SQL database you are using CE, or full SQL

you need to double click the title bar at the top of samba after logging in. It will make the window smaller and youll be able to see in the title bar, at the end of the version its says you are using, either CE or SQL if you are using SQL. if it says TXT then your not using SQL at all and everything is being stored in a text file and not the SQL database

In answer to clearing transaction you need to download and install the database tools module from sambamarket. This will add the SQL script into the manage section where you can run it direct from inside samba and it will clear ALL transactions including sales, inventory puchases etc so ensure you backup first

There is obviously more to it than just installing SQL, you can quite easily install SQL and still use CE or even TXT as ‘database’.

Yea! I have just give the screen shot. Is it mean I am using SQL? B 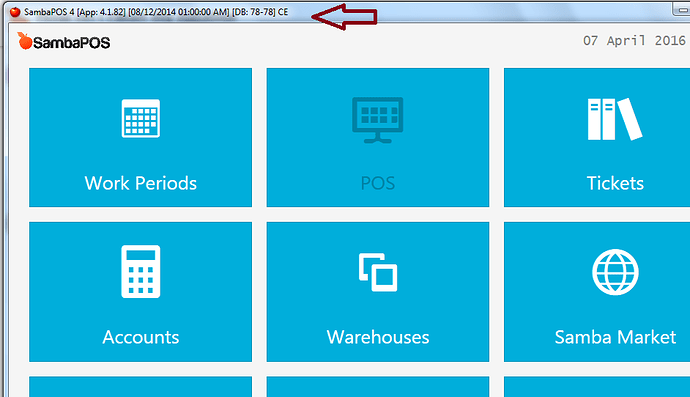 In answer to clearing transaction you need to download and install the database tools module from sambamarket. This will add the SQL script into the manage section where you can run it direct from inside samba and it will clear ALL transactions including sales, inventory puchases etc so ensure you backup first

I have install Database Tools inside of the samba POS from Samba Market but get no change which I can use to remove data. Please tell in which portion I will get this?

Your using CE which is less than ideal.

Like I said there is more to it that just installing SQL express.
You would have been better with Local SQL which is offered in the samba installer.

I would say toucan convert your CE database into a SQL database but am not sure if you would be up to that task.
Kendash did an SQL tutorial with a ‘bonus CE convert’

Your slowdown is because of CE. CE gets slow as your database gets bigger. SQL Express would be immune to that.

Thanks Kendash! As your tutorial I have done all. I hope SQL Server installed and configure successfully, but POS till show the CE in the title bar. So, is it mean that till now it is not OK?
I give here some screenshot. 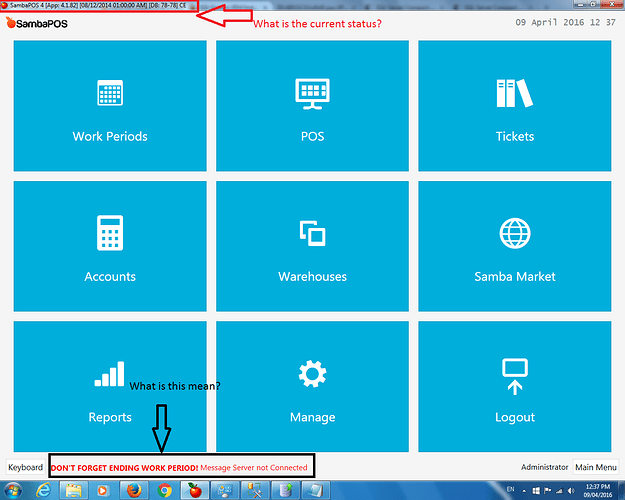 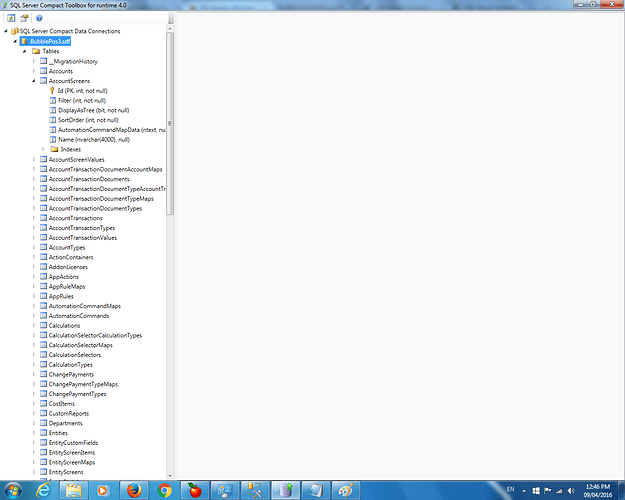 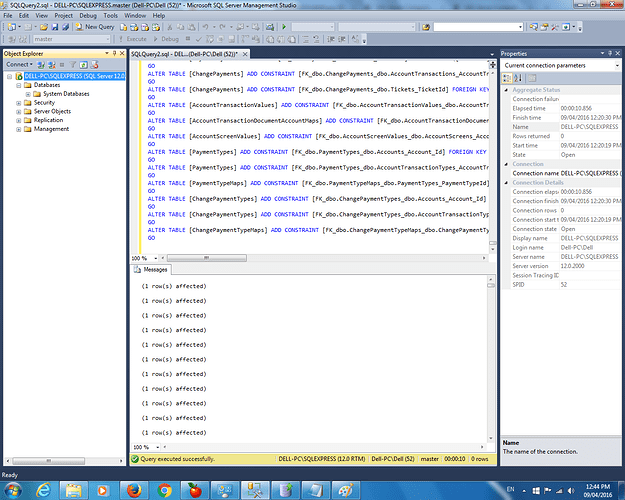 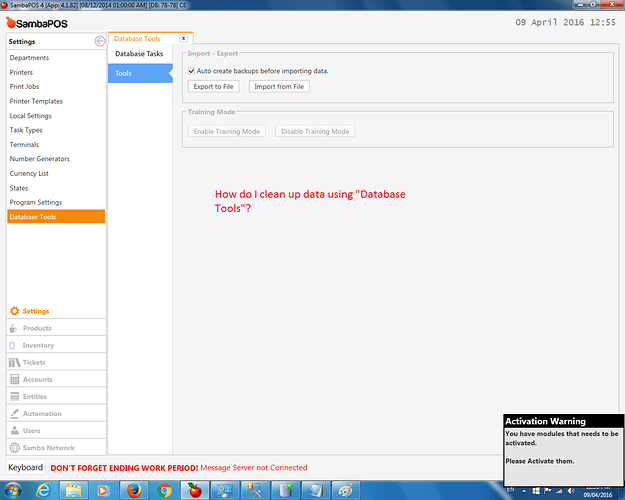 Another issue till now is not solved that data clean up. I can not clean my database using Database Tools.

Click on “Database Tasks”
There will be two buttons at bottom.

Then a task should appear to clear all database transactions.

If successful, it should take you straight back to login screen with all transactional data wiped.

Thanks Shivan! Database cleaned up…

Once you’ve converted your CE File, Find that file and follow some instructions below.

Put your new database file that was converted(created after conversion) into a directory that you can easily find( I find simply making a new folder in C:/DB(example) will make it easier to find when going for a database restore.

Drag the database into that newly created folder(For convenience sake), then in SQL management studio

If all goes well, the lower left side of that window should show ‘Progress – Done’. After which

After you’ve done that, take a snapshot of your SQL management studio with with "Databases’ menu dropped down. You should then see “System Databases” and your database.

From that point on, It’s all about getting Samba connected to that database, I will discuss that next after you’ve done this.

In this process I have gotten this problem (See the screenshot). 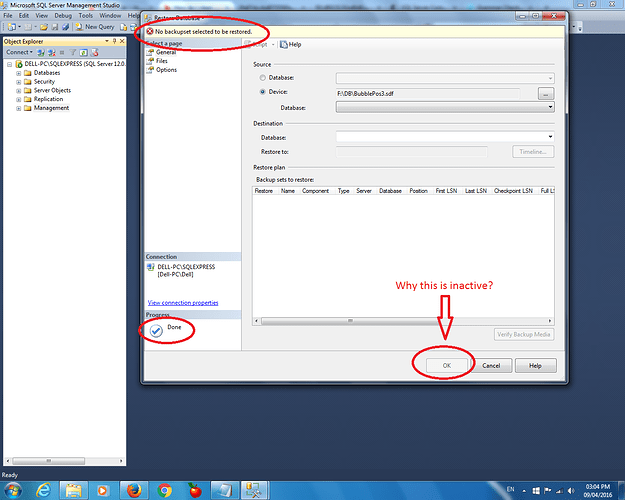 Can you tell me about my mistake?

The SDF file is a CE database. You cannot restore it into SQL LocalDB nor SQL Express. You need to go through the conversion process to convert the SDF data into a format that can be inserted into LocalDB/Express.

In reality, this is not so much a “conversion” process. Instead it is a method that generates a SQL Script that contains all of your data, which you then “execute” in SSMS to insert your data into LocalDb/Express.

Specifically, you need to follow the process here… click the arrow on this quote to jump directly to the posting: