How to achieve LARGE font in Xprinter C58K(Epson Compatible)

I am new here and found that the V5 is a quite powerful and comprehensive POS system. I think I will eventually become a VAR of it.

I was reading the tutorial in a very loose manner since it seems there isn’t a formal manual. Am I correct?

When I use the SambaPOS5, I have not been able to get the large fonts printed by a label software p-Touch(for Brother QL700 printer). I tried switching the print mode from nothing to ESC/POS, HTML and Windows printers and nothing works probably due to my lack of knowledge in the tags of those printer formatting commands. What printer mode you guys think the p-Touch software is treating my Xprinter C58K as?

The pic shows the big font I use p-Touch on my Xprinter. The center one is using ESC/POS and the last one is using the NV logo ability that comes with the printer. Note that the center print also has a messed up code like 74747474 around the title TICKET. Please advise.

After changing the browser, the upload of the pic works. 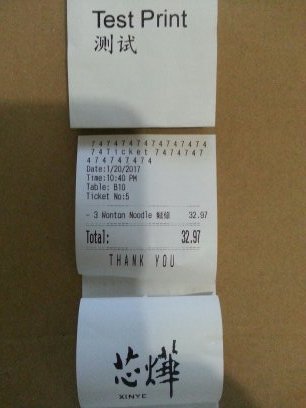 Font size in exc/pos mode is set by increasing the members in the larger smaller brackets at front of line. It’s height and width.

Suggest you read the template tutorial fro. V4 which is similar at the core.

ESC/POS mode is very flexible, and you can print NVRAM images using <XCT> codes to address the image location in memory.

Leading tags in the Template are explained here: