How to increase or decrease x amount of item quantity?

I want to create a button in order to increase or decrease x amount of item quantity? Does anyone know it? Thanks so much

There is already a + and - quantity buttons at the top left if you select an order.
You can also use the keypad to type the quantity in before pressing the product button.

I mean i want to change the submitted items in order. Just like the syntax i did with “Update quantity” button( show popup to input quantity ), but i want to get current quantity then minus with the number user input. EX: 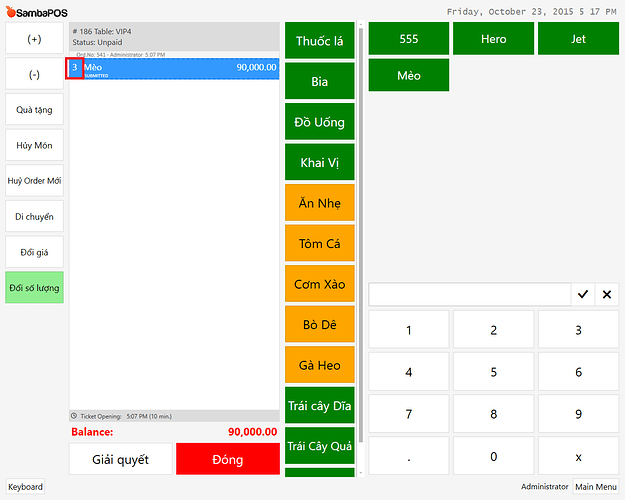 As the result. the final quantity will be 1.

Press the Minus Button on the left side

If it’s submitted then you need to void it.

u don’t have to void u can just

Press the Minus Button on the left side

Lol interesting. So you make your chef prep them anyway and set them somewhere hoping someone else orders it and then you warm it up?

Submitted means it’s been sent to kitchen. You want it to show void so chef knows not to make it. If your not actually sending orders to a kitchen via printer or screen then you may want to do a custom flow of some kind.

when i separate them i tell chef to stop making them till i sell em back again with ticket note (don’t make) or i tell him that,
sometimes people oreder food and drinks but they want drinks after they eat tho i tell my bar to hold the orders with ticket note or order tag

Sometimes, customers ordered 10 beers. We submitted, but then they return 5. I want to change the quantity is due to it.

Sometimes, customers ordered 10 beers. We submitted, but then they return 5. I want to change the quantity is due to it.

So when you check this ticket later you’ll see customer ordered 10 items but returned 5 of them later.