How to Print Price Tag using Order Tag on Receipt

i have tried this not working

i even put the same action on command button but nothing is happening meaning its not executing the action!!!

why and what can be done?? any suggestions @QMcKay and @Jesse or @RickH

What is the action Monday Lunch Promo? And your Tags are Monday Promotion and Tuesday Promotion but I do not see any reference to those at all in the action? How does the action know which tag to use if you have not told it? That action works you are just not using it correctly.

@qmckay has built some very good discount tutorials using order tags very similar to how your attempting to use them. I would recommend reading those thoroughly to get a good grasp.

Here is a good one to start with:

As you can see in his tutorial you can use 1 tag.

i have change order tag and action also 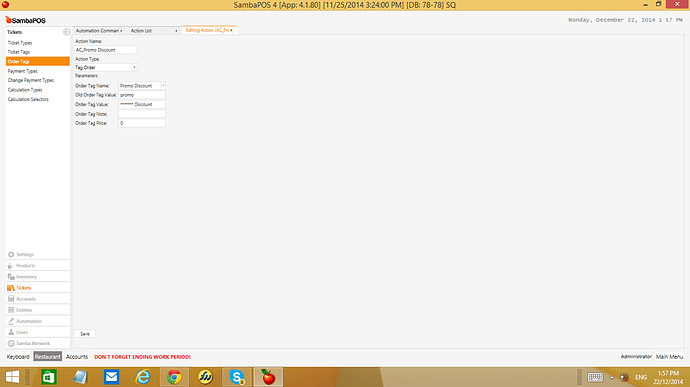 I am not sure what you mean by

The screenshots you have shown are completely different than his. Notice in his Order Tag Value is the same as the Order Tag… not to be confused with Order Tag Group…

Perhaps the action is where the confusion can be. Order Tag Name is referring to the Order Tag Group… Order Tag Value refers to the actual Order Tags.

@emre I know @qmckay has brought this up multiple times but I thought I would mention it as well. As you can see here

Perhaps the action is where the confusion can be. Order Tag Name is referring to the Order Tag Group… Order Tag Value refers to the actual Order Tags.

well i got the tag from modifier tutorial as @emre states:

but on the template layout it does show {order tag: x}

@madiha you are referring to a printer template section. We use [ORDER TAGS] section to define template for printing order tags. Notice square brackets.

@Jesse thank you for noticing that. That action was implemented before order tags had a value feature but I’ve kept action parameter names not to break current implementations. I’ll correct them with a major version update.

ok got it {order tags} will print direct value

and [order tags] is used to indicate order modifier

This is a Template Section:

This is a Template Tag:

thnk u @QMcKay got the point {ORDER TAG:X} can directly be used without using the template section and template tag can be used in the top section of template