How to troubleshoot poor SambaPOS performance

Hello,
we’ve been using SambaPOS for a couple of years now and I love it so far - although it has its quirks, most of them can be resolved with a help from this awesome forum.

What bothers me from the very begining is poor performance of the program. I’m running it on a i7-6700 with Samsung 860 EVO SSD and 16 gigs of RAM on Win10. I stripped down the fancy automation and widgets and left only what is really needed. SQL 2019 is installed locally and absolutely nothing else is running on the PC.

The thing is that SambaPOS is so slow from time to time that it is almost unusable. The PC sits there with single digits CPU usage but even navigating through the menu is a pain as it can take up to 20 seconds to get from POS screen to Manage. Printing a ticket can be a matter of half a minute (Epson printer connected via USB). The program also freezes a lot, we’re getting the not responding window at least about 5 times a day.

Here is a video where my sister is trying to open a table: 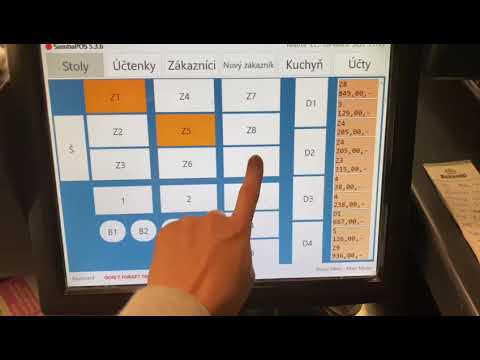 First one works, second and third take 10 seconds to open just after the window freezes for a while. No custom automation fires on table opening (is it even possible?)

It makes randomly. No matter whether the PC is freshly booted, whether 1 or 100 tickets are opened, whether it is a beginning or an end of a workperiod etc.

I want to believe that I’m doing something awfuly wrong and that there is some easy fix.

I’m looking for a way how to troubleshoot it. Is there a way to get a hint on what is slowing it down?

Is it possible that adding colors (30 colorful producst, no images) to menu items slows down the overall performance?

Thank you in advance,
Ondra

What are you using for those numbers on the right? It possibly is that query slowing the entity screen. It has to query it EVERY time you refresh that screen.

This is definitely not normal. Something about your configuration is causing it.

PS you can PM me a copy of your database I can look at it for you.

It is a ticket lister on the right. I’ve deleted the widget and will check tomorrow whether it helps or not. If it does, I will have to find another way how to quickly open one of 3-5 last paid tickets.

It would be really kind of you to look into my database. Sending a PM.

Ticket Listers can be notorious for taking up a lot of memory. It depends on what is in them and how many tickets it is querying.

I ran into something similar (though more intermittent) a while back and I traced it down to the database autogrowth settings.

From other experience, I’m also with Jesse that it may be the ticket lister.

we’ve been using SambaPOS for a couple of years now

Maybe your SSD is giving up. Search and download CrystalDiskInfo and check your SSD’s health.

It happened to me before, so I ordered a server-grade SSD to host my database. I just hope it doesn’t poop out like my old one

I highly recommend m.2 pci-e lane drives whenever you get a chance.

The SSD is no more tha 1 year old, it should be fine. I kept buying new PC’s thinking that it will solve my issues

The PC does not support m.2 SSD unfortunatelly. I’ll try switching the PC for my Ryzen 7 4800H 16gigs of RAM and 512GB m.2 SSD laptop when I have enough time to install all drivers etc.

Deleting the ticket lister helped to some extent - it feels faster altogether but we’re still having unexpected freezes and lags from time to time and printing is still slow sometimes.

I don’t think it solves the issue though. Kitchen screen also gets these lags and “not responding” freezes several times a day and there is no ticket lister, just task viewer. It runs on i5-4590 Hp EliteDesk 800 G1 SFF, 16GB RAM, 120GB SSD, wired network.

The SSD is no more tha 1 year old, it should be fine

No harm to just run a quick test on the SSD with CrystalDiskMark or AS SSD Benchmark and see if you are getting expected performance from the SSD. Both of those utilities are free.

I have seen faulty SSDs before, even brand new, that perform worse than a hard drive!

do you have pending updates to be installed, as we have had issues with that slowing the system down when updates are pending install. another thing i would check for is how full is your c: as sooner or later the drives get full with auto backups from sambapos. hope these help.

I believe that deleting all ticket lister widgets did the trick. Last time I forgot to delete a ticket lister on RDP clients. After deleting those there are no more lags on the kitchen display. It is still slow from time to time and does not respond well to touches (even though the button goes blue so Samba obviously registered the touch) but we can live with that.

I ran a couple of tests and found out that the server PC is not even remotely as fast as I thought. I’ll try to use my laptop as server PC for a couple of days to see if it helps and will buy a new PC eventually.

Tasks and ticket listers are intensive. We are studying kds and considering making an external kds app.

When you buy a server you need to invest the most into high quality ram and really good true pci-e m.2 drives. It will make a major impact more than the cpu.

Sql express won’t use more than. 1gig if ram but high quality high speed ram should help. If you go with full paid sql you can use all the ram you throw at it.

I ran Sambapos (v3, v4 and V5) with sql server exp on old used hardware and new, on old i3s and Athalons with 4gb ram and 250 slow HDDs, and on latest i7s with 32gb ram and best SSDs… and I’ve only encountered slow performance, lag and weird responses in 2 situations:

In general, slow response in Sambapos GUI is related to the sambapos messaging server/client communication being affected by something… look after it and make it clean and it will make you happy

I hope the above helps someone. (happy to be corrected if I’m wrong)