How to View Void Report only when payment has been placed

Your on the right track we just need to fix your flow. Sorry I do not need this so I did not attempt to build it. If I get time today I will look at it and try to help you further.

thanks alot will be looking forward to it

Void after Payment have been settle and to show on reports orders that have been voided after payment settled.

I just want to make sure…Do you ever Void orders before Payment?

yes we do void orders before payment

Ok thank you that clears it up for me… so it really is just a reporting issue. You want void to function as is but you just want it reporting only after payment. You do not want to see voids at all until its paid.

I have one question for that…what if the customer does not pay? What do you do with the void? I know it would be a rare case but what if customer got up and left without paying after you had voided an order? Do you prepare the food before payment?

EDIT Sorry for all the questions I am trying to understand your work flow so I can suggest ideas to you.

@Jesse waiting for ur guidance

Sorry I have not forgot. I am in process of selling my house so I’ve been very busy thus week.

ok i shall wait then

@Jesse you seem to be active today

well how do i define a state to be reportable, any specific command

@Jesse can you please let me know in which table are we storing void details.

By default, Void is an Order State, so it will be found in the [Orders] table in field [OrderStates] …

If you have renamed the State to VStatus, you need to search for it instead:

thanks @QMcKay a great help i will look into it

are you refering to the void rule that i have defined or i need to setup a new rule? 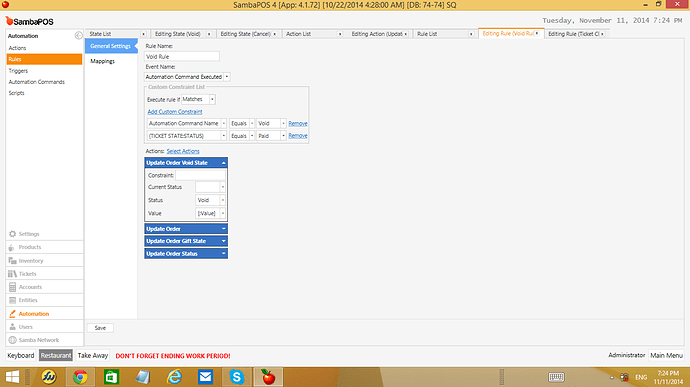