Can POS screen make split from manage,
May be make just POS front end, i think it will make sambapos front end faster, and specs hardware with small perfomance like intel atom run smoothly. Because many POS hardware use small processor.
If we use high prosessor, price of POS become expensive.

Management section is only used when your in it?
Not sure what your getting at?
I have setup so stall go straight to POS screen and dont see main menu etc if thats what you mean?
Other than program size it wont change performance as while in POS what else do you think is happening which is effecting performance which isnt POS related?
If you run SQL on more powerfull machine the atom based terminal will only be a client and have less requirements as only dealing with its own processes.

I just think if file small, so cache at RAM will small size and make sambapos light and faster.
I just idea pos and management still like now l, but add one application for POS screen and x, z report for terminal.
I look sambapos now take more than 300 MB to run at RAM

Its not an area I’m overly familiar with but would 300MB be considered allot?
Look at my desktop I have many apps using allot more, many I am slightly shocked are using so much.;
iCloudServices 1GB
CorelDraw 720MB
SQLServer 650MB
ClipboardFussion 612MB
Crome 440MB
Thunderbird 440MB
GVActiveX 317MB
Crome 310MB
SQLServer 260MB
Crome 220MB
Crome 180MB
SambaPresentation 180MB

YES this machine is not a atom based POS but given the complexity of samba I think it will need a respectable amount of resources.

I have generally avoided these type of ‘lite’ machines rather than force a vital business component onto under power machine…
If I were you I would look at stipping back some of the luxuries on windows first as EPOS just doesnt need allot of the nicities an os provides.
Saying that, are you actually having issues? Many are using samba on lower powered atom based tablets with respectable performance… Maybe you better off getting better hardware and investing in an important aspect of your business

The main terminal that runs the Database requires moderate specifications. It isn’t the POS Front End that requires power so much as it is the Database Service and Message Server (which contains all the Rules for Automation).

If you want a light-weight front end, you can use PM-POS, or the POS module in GQL Modules (both of which run in any Browser on any device and consume very little resources), or the native upcoming Android App or iOS App.

Even the SambaPOS Application running as a Client (connecting to another machine which has the DB) does not require any significant amount of resources, because all it is doing is painting screens and interacting with the Server. The amount of RAM used is simply a factor of caching things in memory (such as the Menu) so that it runs faster rather than always needing to do remote requests to the server

The Server will always need to be somewhat powerful.

Delete samba.modules.management.dll and … you won’t have management 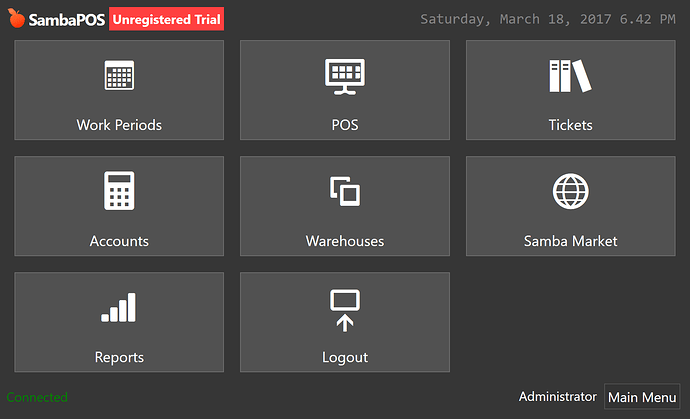 However this won’t make a lot of difference on RAM consumption as management module does not consume a lot of RAM.

Automation > Automation Commands > under “Navigation”, change each ones Mappings

If you mean to lower RAM usage deleting modules won’t make a difference as we don’t keep unused modules on RAM. If we keep all modules loaded on RAM it probably consumes more than gigabytes

I am running it on a low spec atom based tablet with 2gig ram and it runs very smooth. I really can’t agree

You could always just uninstall all the modules and use notepad. Lol that was a bad joke.

You could always just uninstall all the modules and use notepad.

or use a Waiters Pad and pen?

yes, i just test it not significant, i get complain from my customer, that sambapos lag when many transaction happen in 1 ticket, lag when payment, my country use many zero, like 1.000.000 and can get payment more than 20.000.000 if any event. the problem when it key at numberpad, like touch 2.000.000, so when touch 200 and lag happen and lately display another zero. so cashier get wrong nominal. its happen when i use intel celeron.

So it lags even while keying payments? This is how it works on a $70 generic windows tablet with wifi connection. You can see specs at the background. It shouldn’t work slower than that.

If you shoot a similar video by keeping task manager at background we may have better idea.

I don’t know how to display link youtube at message, please to chek with this link https://youtu.be/511Z3WVBcnM

@Johan_yo thank you very much for the video but I expected to see task manager at the background to have an idea about cpu / memory / disk usage.

May be at monday i do that, because i am not at customer place. I will to check it, that video i take when my customer complain to me

No good, they forget. A 3 part pad gives an audit trail…