Currently, the data export interface for the customer looks as below: 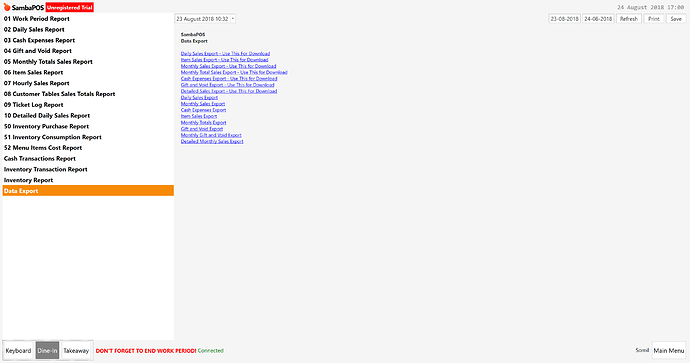 As you can see, the Data Export items are bunched together on the right.

Is it possible to have some settings for this page, so that we can display the Data Export items, in a better fashion.

Like maybe increase the font size, and line spacing between the items.

There is a data export action I think isn’t there?
If so you could make a custom entity screen with automation commands.

There is a data export action I think isn’t there?

Yeah it’s there, he has it selected already. He was just asking if the data export report links can be a bigger font / more spacing between items.

But this is also true if you want control over how it is displayed.

Yes, i could use an entity screen, but, then i will have to spend time in building it, and testing it.

I was just hoping as @markjw pointed out, we could get some settings to increase the font size, and line spacing at least for the Data Export Page

As I’m using existing report viewer to list data exports we don’t have much options there. I increased font sizes a little bit. If it gets a lot of requests we may implement a separate UI for data export selection.

preview on right and export where print would be on reports?

I think that wouldn’t work so well with data exports. Usually you wouldn’t want/need a preview also, the data that is being exported if in JSON or XML format would be unreadable to the average user and just add confusion.

I am ok with how it is currently but agree when you have many data exports, they are quite squashed together so the larger font size would work, if a bit more line spacing is possible would also be good. At the same time though this is something I brought up a long time ago when data exports were first introduced - it isn’t so obvious I felt that clicking the data export would run it immediately and also wasn’t obvious that it will follow the same date range / work period as defined with the report. I honestly never thought more about it though, but a bit of text above the links clarifying that fact might be useful for new users.