First Unit should always be smallest unit you use in a recipe… 2nd is unit you buy it at… multiplier is how many of Base unit are in your transaction.

Multiplier is subjective depending on how you want it calculated… But the Main unit should ALWAYS be the smallest unit used in your recipe. If it is not set like this then your inventory calculations will be wrong this means your cost will also be wrong.

The two main units to pay attention to are Base Unit and Multiplier. If you want it to track it down to unit level and not % of box you would enter Multiplier of 1 but your Base Unit should ALWAYS be smallest unit used in recipe and that should never change.

IF you use multiplier of 1 then when you do a purchase order and you get to QTY you should fill in the exact amount of units per box you buy… so if you buy a box of 24… QTY would read 24.

IF you use multiplier of (# of items per case) so lets say 24 to keep consistent… then your QTY field in your purchase order would read 1.

The reason it is set up this way is because this is food industry we need to track inventory by % of case for perishable items that it is impossible to track to single units… but we also need ability to track single units on things like cups/lids or beer sold by bottle so it has been setup to allow us to do both depending on how we define each item.

I agree @Jesse. This should be a bottle, can, ounce, gram, mL, etc.

Even with a Can of soda, you could set your units this way, though it would be overkill unless you are tracking partial cans for mixed drinks for example.

Most would set Soda as:
Can
Case

Same with your Rum:
mL (or ounce)
Bottle
Case

Then sell a Rum and Coke with a Recipe of:
2 ounce rum
4 ounce coke

how should I setup my units?

EDIT: Fixed a mistake for Base unit. I accidentally had it listed as 1 instead of Bottle.

By doing this it will track it to single bottles in your warehouse and inventory screen.

If you want to track it by % case you would do the following:

When you create transaction document for purchase your QTY would be 1 and you would put your Price for 1 case in Unit Price and it will auto populate Total Price.

Something Important to Understand Transaction Unit is mostly for visual reference. The two main units that affect cost and how your Warehouse lists its inventory is Base Unit and Multiplier. You could technically leave Transaction Unit blank and it would work just fine.

The second time, after 8 months of work, I naild it!!! LOL

So my stock, prior to the change is completely messed up…

I am looking a way to fix this, but I think its not worth…

What you do to fix it… instead of changing your current item… just make a clone item put a _ before its name. Use this for all future purchases until you use up your old items… once they are used up just delete the old item and change your recipe to use the new one. and Change new ones name to get rid of the _

But the problem is not in the stock itself, is in the units inside Samba… I changed the units in the products, so old data is messed up, new data is good…

I will try to write some scripts to fix this…

Bah lol silly gerlandog I was trying to help you with this in a post a week ago.

A week ago I changed all my UNITS from Stock, so now I dont have any more decimals in my bottles… you help me alright!!!

I do it this way (I don’t use a number for a Base unit, I use the item Package description)… 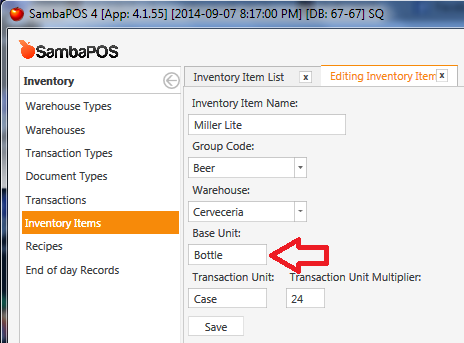 If you use 1 instead of Bottle, you won’t know what you’re counting… you would see 1 where it should say Bottle. (this is your Stock Report @gerlandog)

Yes sorry I told you wrong. I got confused lol. Let me fix it. Thank you for making me realize my mistake @qmckay

EDIT: Original post fixed VERY SORRY IT WAS COMPLETELY WRONG. not really sure why I typed a 1 there… lol

@gerlandog You should NOT use a 1 for Base unit. Again sorry if I confused you my mind told me I typed bottle there but my fingers typed something else. I have scolded my fingers

Technically multiplier is the only Unit that affects the actual math. The others help with relationships and make it so you enter your transactions correctly and populate the correct fields to relate it into cost and inventory tracking.

How did your data get messed up by changing the base unit to “1”? Did you change the multiplier as well? Did the actual numbers change for your old data, or only the unit description?

Allow for users to create as many Units as they want (globally), and they must use them from the base-upwards. If the 3rd or 4th or 5th Units are unused for the Item, then they are ignored.

@emre, while we’re at it, it would be nice to have what I call Package Types. Then when you define an Inventory Item, you can use a pick-list for defined Package Types for each Unit…

He changed it and used a CASE for reporting.

A week ago I changed all my UNITS from Stock, so now I dont have any more decimals in my bottles… you help me alright!!!

If you change the current items that already are part of recipe that have past purchase transactions performed it will mess the data up. This is why I mentioned:

What you do to fix it… instead of changing your current item… just make a clone item put a _ before its name. Use this for all future purchases until you use up your old items… once they are used up just delete the old item and change your recipe to use the new one. and Change new ones name to get rid of the _

EDIT: Before we get this thread anymore confusing and off topic I am going to move the discussion to a new thread so @QMcKay can have his post back

No worries @Jesse, the topic is still regarding Inventory improvements, and even the discussion regarding how to define Inventory Items is valuable. I don’t mind at all.

Bah ok. I will delete the move then. I think I opened up a can of worms with @gerlandog just trying to sort it out.

To clear up confusion:

We had a discussion on inventory tracking couple weeks ago. I was trying to convey the same point I made in that discussion in this discussion as well. I just had a typo in my explanation in this post which is now fixed. @gerlandog can you let me know if you understand what I was saying now?

Yes I understood everything… the data went bananas because
I had

and changed it to

SO new data IS OK, no decimals in bottles…

Yeah its corrupted now. The only way to change a unit like that is to create new items and insert them into the recipes…and take old items out. But you would want to use up the inventory of previous items first before you switch the recipes over.