When trying to call this tag it does not output a result. My payment type is Fast Cash when I input this it shows nothing. {Payment Total} works but I want to separate my Payment Types.

I am using it as {PAYMENT TOTAL:Fast Cash}

Seems working fine for me. 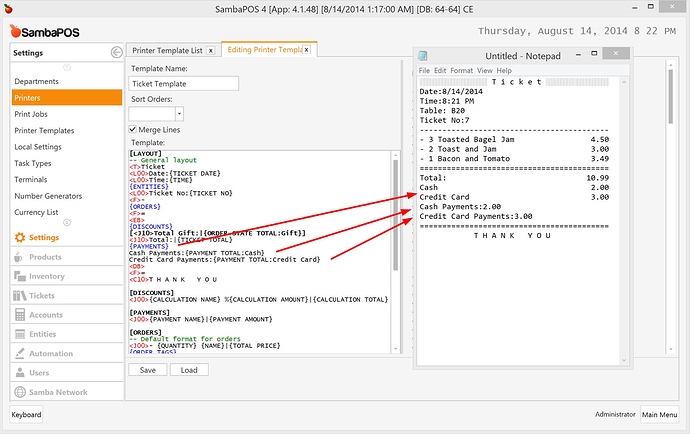 @Jesse, where are you attempting to use the tag? In a Rule? If so, for which event?

Let me explain the entire thing because its quite complicated. I am implementing a Automatic Tip system on my Fast cash buttons. Example you ring up a 2.00 hamburger… You press Fast Cash $5 It will popup asking you if you want to put the change as a tip… You press yes… it applies the {CHANGE TOTAL} to an Update Calculation Type action.

It works… except when it adds the tip it nullifies the first fast cash payment… so i had to put another one into the rule … which gives the right results… however in the Ticket Template for the Printed Receipt It will show 2x payments So I was breaking that down to only show 1 by using : [Cash Tend:|{PAYMENT TOTAL:Fast Cash}] that way it would only display Cash Tend: #.## if it was a Fast Cash payment type… I had an aditional line for the Credit Tend so it would show it if its credit.

It works fine If I choose No for Tip. But If I choose Yes even tho the payment type is coming from Fast Cash it will not pull the value.

EDIT: Never mind I understand why it is not working… The two Payments are nullifying each other so its pulling a 0 and not displaying. But now I dont know how to get around this. To display my Tendered amount on my Printed Receipts.

EDIT: this means that when the Calculation Type is updated its adding the First Fast Cash payment to Ticket total instead of registering as payment

EDIT: Maybe I should relook the entire process. Perhaps I am using Update Calculation Type wrong. I am calling it from an Ask Question action and then it gets applied if I choose Yes. This made sense to me that it should work this way? What I dont understand is why it applies it differently this way vs using the Payment Processor to apply it.

Is there a way to read the input from the Confirmation Question of a Payment Processor? if so that would fix it.

@Jesse I have to drive to airport to get back to home. When I’m back (if you didn’t already solved it) we can work on it. Can you please create a backup of that state of database and PM me before attempting to solve it? I wondered what nullifies payment.

Ya I already have one. I restarted my system build last night from scratch and rebuilt it back up with ordered Backups when I finished each feature. So I have it all and its organized.

Here is an example. 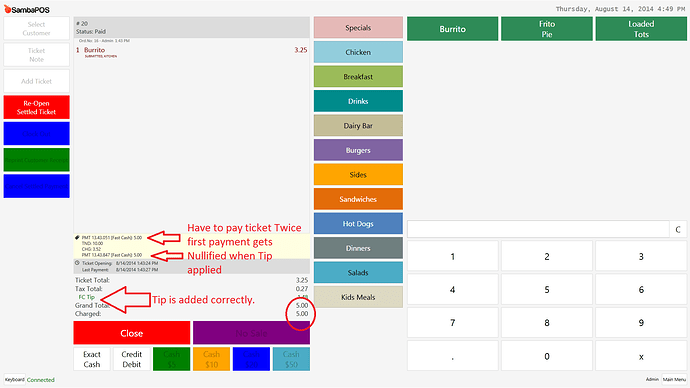 As you can see in the above screenshot the Update Calculation Type is working and applying the Balance as a tip correctly with correct amount. But for some reason when its applied it makes the first 5.00 payment Null so I had to include a second Pay Ticket action into the same rule to get it to come out right. This works fine for everything except my Receipt print out which will show TWO payments under {PAYMENTS}

It messed up some other things on my Receipt printout but I was able to use some trickery to get the correct numbers; however I ran out of trickery options when it came down to showing Tendered Amount. If {PAYMENT NAME} was available to Ticket tag values I could punch a formula in to display it right, but {PAYMENT NAME} is only available as a modifier for {PAYMENTS}. I would rather not use the trickery and have the actual real numbers. This feels like its not working as intended but it could be me missing something?

I think I am going to back off on trying to implement this until I can either A. figure out a different approach to adding the change as a tip on Fast Cash transactions other than Calculation Types. or B. wait to see if you make any changes to Calculation Types for it to work with less steps.

I am having to modify so much to get numbers to come out right that it is affecting other features I want to build. Example: because of using two payments to get the transactions to come out right, it is throwing off my ability to show an accurate popup on a Refund that shows the amount to pay back to customer. Normally I could use {TICKET TOTAL} or {TICKET TAG:PMT} but neither of these show accurate results due to it adding an extra payment. I could even do an expression that does [=TN(’{PRICE}’)+(TN(’{ORDER TAX RATE:Tax1}’)+TN(’{ORDER TAX RATE:Tax2}’))] I may have that syntax wrong but basically it would take (Order Price + (TAX1 Rate+Tax2 Rate))=refund amount. This would read the right popup but the refund would not be accurate because its not recording the tip correctly.

Once you add a tip to a payment if you refund an item the tip should not be affected…but when you cancel all payments it messes up the tip as well.

EDIT: This is a pretty big project of mine because I need it to work when I go live. So most of my time will be on the refund behavior and Fast Cash tips.

I’ve implemented a small feature to Add Calculation. I hope it will work fine.

I will definitely run it through a vigorous test lol.