Is there a way to access a specific report from a custom entity screen?

I’ve been playing around for a couple of hours now on one of my custom entity screens in design mode and I can’t seem to figure this out:

I’m curious to know if there is a way to add a widget or button to a custom entity screen that would allow a user to access a custom report. This way I can avoid staff members from accessing the navigation screen and they can still access their user report and print it off for the end of their shift.

Thanks,
Any help would be greatly appreciated

There is the custom report widget??? That not what you mean?

I was playing around with the custom report widget but I could not figure out how to print the report. I would prefer the report not to be showing on the entity screen. I would rather have a button that would link to the report where it could be printed.

My thought would be to have a button set up that the user could click to access the report.

Maybe navigae module action?
Not used but this might work to have a button to go to report section.
Alternatively a button with action to print report?

I think you’re on to something. I’ll play around with that for a bit and hopefully I can figure it out. I like the idea of a button with an action to print report

I created an automation command called “View Report” and had it displayed on tickets. In the Navigation Settings of the command, I set the Navigation Module to “Reports” and the Navigation Module Module Parameters to “Current User Report.” I thought I had it but then when I press the " View Report" icon in a ticket, it does not navigate to the report screen. At this I’m not sure what I’m doing wrong here. Am I even on the right track?

Im not overly familiar with the navigation module, I think it came in with the custom menu layout so not sure if only works for that.
Not sure on what to use for the parameters, might be issue there…
Know the print report action works though.

You cannot navigate away from an open Ticket, so that might be your issue. 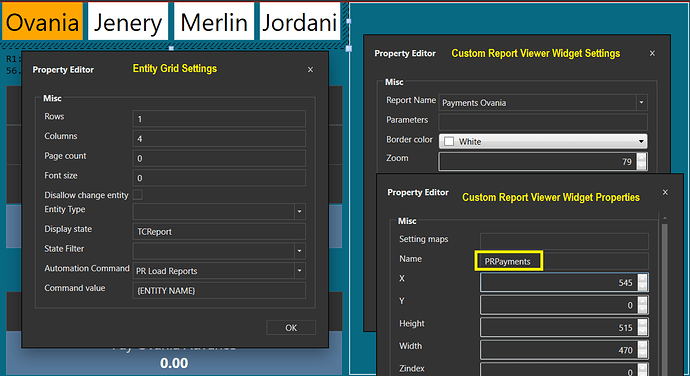 Alright I am officially lost. I can get as far as Automation Command Name Equals “View User Reports” but I have no idea what those actions are.

So now I’m trying to make a Auto Command Button on a custom Entity Screen called " View User Reports." I’ve set the Command Value Name as “View User Report.” But Still nothing happens when I get out of Design Mode and select the button.

What I tried to demonstrate is that there is an Action called Set Widget Value.

Using this action, you can set the Report Name of Report Widget (seen in the Widget Settings), so long as you you have given the Widget a Name in the Properties dialog.

If your button on the Ticket Screen is not bringing up your Custom Entity Screen, this is the frst hurdle you must overcome. For that, use a Navigate Module Action. Set the Module to Entity, and the Parameter to the name of your Entity Screen.

I think i got the second part but I’m not understanding anything about the widgets. I’m sorry but I think this is way over my head. I get the fact that there is Rules and Actions and Auto Commands but I don’t know what order to create them in or how to apply them. It all seems circular to me.

There has to be a simple way to allow a staff member to view and print their daily sales report without accessing the Navigation and Reports Screens where they have access to a tonne of sensitive information.