In my thing I’m working on in the beta section, when i’m coming to counting the orders to determine total amount in each, the quanitty screws me over, because some orders may have been more than 1. So i’m asking is there any way to limit the quantity of orders in a ticket to 1, and just repeat the order for each quantity.

The total amount in each? You mean reporting wise as there are two forms of order count, one which returns order lines and one which is qty taking multiples…

As for not multiples no keypad and ?prompt for price changes will reduce along with the option in setting about merging order lines. However that doesn’t split if you did 2x it just doesn’t merge 1x and 1x.

As for not multiples no keypad

They could still select the order and use the +/- buttons though.

They could still select the order and use the +/- buttons though.

Can I unmap those buttons? Or would I have to do loads of automation?

Why not just remove the merge lines option?

Wheres is the Merge Lines Option? 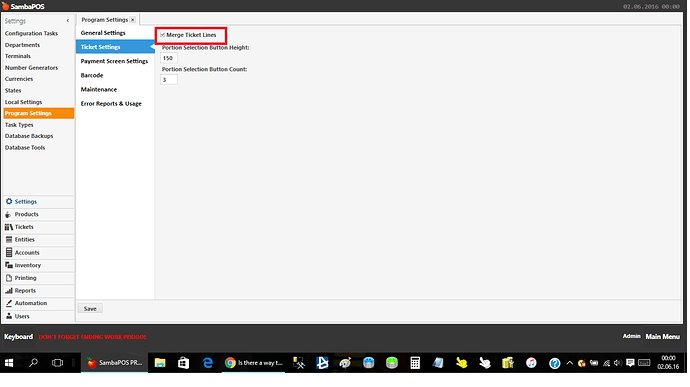 That doesnt work, I can stil get mroe than 1 when using the +/- buttons

As I said I didn’t think that would, that option stops it automatically merging identical new orders it doesn’t split multiple wry orders just doesn’t merge seperate ones.

Any idea then to stop the +/- buttons being used?

@emre Could we potentially have a way to unma +/- buttons on orders?

The only option is to not map any buttons to ticket, this would completely remove the “bar” down the left hand side so those buttons wouldnt be visible

The other option is to make that button a custom product button so it can be in a category, look like a product button but its actually an auto command button, thats how my whole custom pos screen is made

Is there a tag to get the order quantity in a Order Added to ticket rule? I think I can get that to work

If using the buttons on left I don’t think it would be order added as its already been added, pressing plus doesn’t trigger order added rules as far as I know…
An option to disable these buttons from emre night be only solution.

Still unclear as to what is the issue your having with multiple qty order lines?

My issue with mutiple qty order’s is that when i send orders to my webserver, mutiple orders only get sent as 1 order so when I execute this SQL Statment to count occurrences

Say if an order had multiple qty that mysql query would only return 1 for each.