Issue with Product Name and Menu Name out of sync 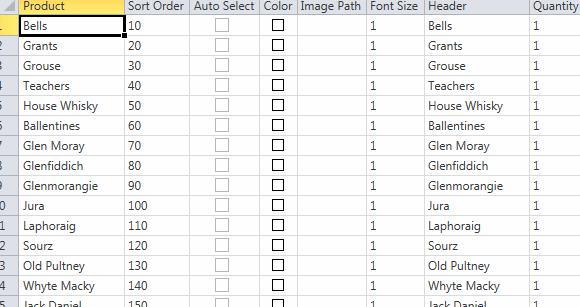 Does anyone have or is able to provide a quick script to update these values?
Have the columns here;

Ideally want to INSERT m.[Name] into s.[Name] but obviously isn’t a straight insert and needs to do it based on m.[Id] = s.[MenuItemId]

@QMcKay any chance of a bit of your magic

It is normal behavior, and it should have no effect the operation of SambaPOS.

That said, if you want to do this, you need to do a joined update, as such:

Thanks @QMcKay
Presumably we could add a where p.[GroupCode] = ‘Spirits’ if we only wanted to update spirits group products menu buttons?
Or would this not work as GroupCode isn’t in ScreenMenuItems?

Presumably we could add a where p.[GroupCode] = ‘Spirits’ if we only wanted to update spirits group products

Yes, you can constrain via either table when they are joined, so yes, that would only update the Menu Items which are linked to the Products which are part of the “Spirits” group…

Thanks Q, much appreciated.
May put together a script into my stock system, so many clients come back with this question again and again, despite explaining its best to add new products for several reasons like reports etc, at least I could quickly fix it with this script