Ive not noticed this issue on any touchscreen i have used before but ive got a brand new Surface Pro 7 which i use as my main and only till. the issue i have is that any of the auto command buttons mapped to Ticket dont work on 1 press of the button, The button highlights so the system knows i have touched it but it fails to fire its rule

Anyone any ideas? is there something in the surface pro settings for touch that might cause this?

below you can see if i pressed the £5 cash payment button as it is highlighted in blue as if im still hovering the mouse cursor over it and havent actually “clicked” the mouse button to press the button, but i pressed it with my finger and my finger is definitely not still touching it lol 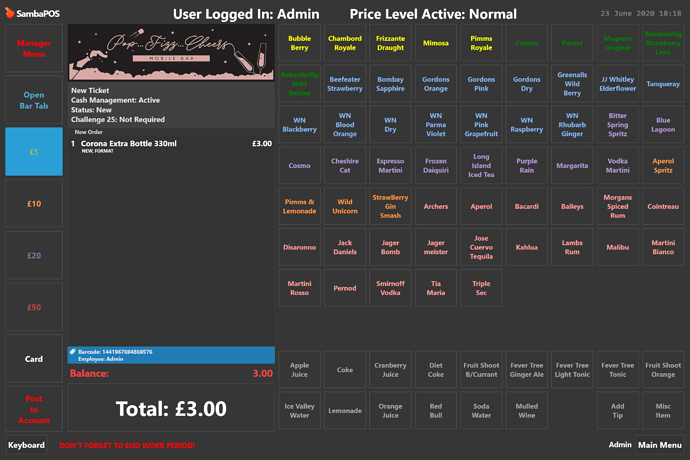 the button on the pos screen even “depresses” on the screen when i touch it so i know samba has recognised the button has been pressed, it just fails to fire the rule straight away @VehbiEmiroglu any ideas what could be causing this? anything on samba end relating to touch screens that could cause this issue?

it also does it on any auto commands mapped to order line as well, basically any auto command assigned to the left hand side of the screen, ive had to move buttons and make work arounds so that som eof my setups works correctly on first button press

Maybe a pointer setting. Check make sure you don’t have double tap for mouse click enabled.

def set ok, it only happens in that left hand strip and only in samba, other applications screen works fine

What version of SambaPOS are you running? I’d assume it’s recent, but just thought I’d cover that since there was a Windows 10 touch issues a while ago that was fixed around v5.2.8.

What you describe sounds like its registering like a hover rather than click. I’ve seen this sometimes if people are touching and moving their finger very slightly at the same time on some capacitive touch screens. Could it be your other touch devices are using older resistive touch and you’re just not used to this? Or along with this, it could be a more advanced type of touchscreen on the Surface Pro 7 that has some sensitivity setting?

Also, I found this online, worth checking its not the case:

yea it seems to behave like a hover but only on the left hand side strip for ticket and order line buttons and only in samba. When using other applications or just on the desktop it works fine.

ive tried pressing the buttons harder but that doesnt work, you can see the actual button in samba “press down” as you touch it but nothing happens and it stays “lit” with the hover colour. its very strange behaviour, if i can get it sorted ill have to go back to not using ticket and order line buttons and move them all to my manager menu instead

In lastest version there isnt any reported touchscreen bug. I think thats a spesific problem. Can you take a video of this?