The line is incorrect:

You are referencing 'fileName' as a string, but it should be a variable. So replace it to this:

Then, check your file contents has xml first, use dlg.ShowMessage at various points, for example verify the path that is used, verify your file contains the xml. It can be difficult to debug in the script editor so doing this can help a lot.

Thanks for your answer, I saw it already but do not solve my problem but thanks!

Almost there
File is loaded, it is a xml file.

it stops at xml.Parse (does not show the dlg.ShowMessage but that error. 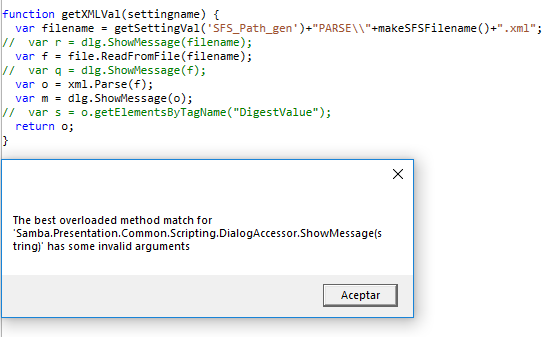 How do I get the DigestValue ?

I have not been following it closely because it really hasnt interested me but just my first thought is your making something extremely complicated that could be handled with simple actions and rules in SambaPOS. Instead your trying to script everything…

I could be wrong.

–> SFS build XML, hashes it, signs it and sends it to Tax Administration

–> Tax administration replies to SFS with XML (accepted/rejected), SFS stores that XML reply in a directory.

–> I would like that SambaPOS reads that XML in that directory and extracts 2 values from it to update 2 Ticket tags.

So which simple actions and rules would you suggest to handle it?

You got that error because o is not a string. change to dlg.ShowMessage(o.toString());

The o object does not accept a lot of methods (nor toSting, nor Get Element, …) … problem is I have no clue on which methods it would accept.

The o object does not accept a lot of methods (nor toSting, nor Get Element, …

Sorry, I misread your script, o.toString() will not work as o is an XML object, not a string. The error message you posted is a generic one when you try to pass a non string to dlg.ShowMessage().

That may return an object, so I think you can try one of these:

I am just guessing as it is pretty impossible to do without testing a script myself.

Also have a look here, this is where I got the ideas for above:

I tried it but getElement is also no accepted method:

That works I get the object o, but don’t know to get the value. 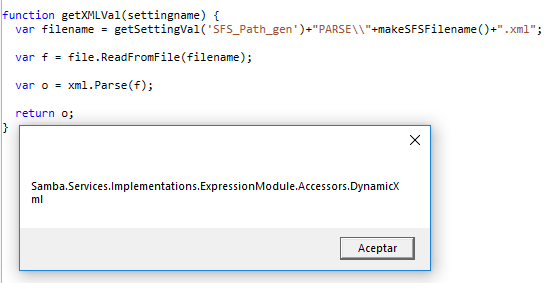 It all points to the fact that may not be XML data there. Did you test the file name and that you have XML returned first? If you don’t do that, there is no point debugging further until you confirm your text from the file is actually loaded into f.

Ok so I was wrong. That is why it’s important to explain what your doing so we see the bigger picture and give you better answers.

Confirmation, it reads the file and it is xml: 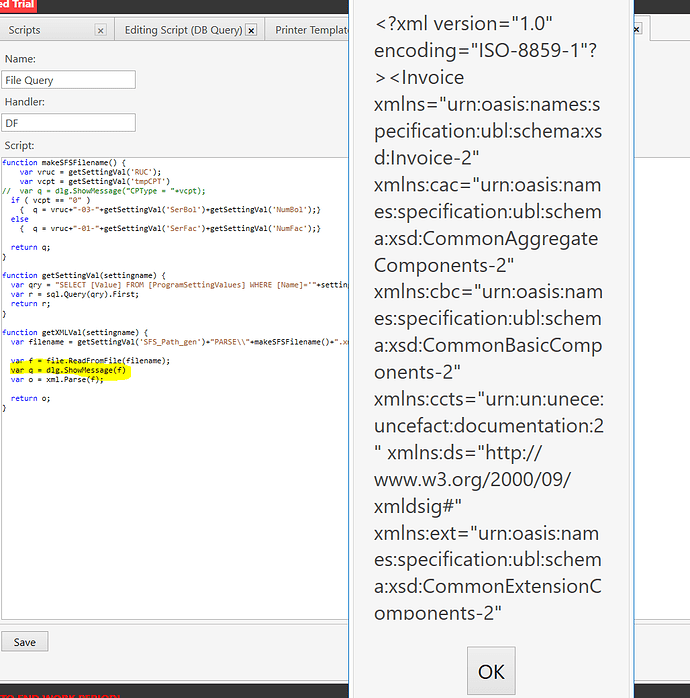 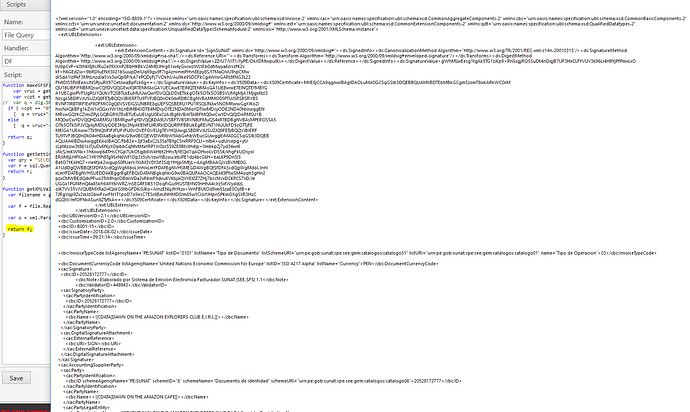 xml.Parse is ok also, it’s just afterwards : How to read the values …

Continuing the discussion from

xml.Parse(xmlContent)
Returns a dynamic object that allows you access tag values with properties.

hint: You can read tag values with Value .
For example book.author.birthday.Value;

In the exemple of emre it is clear …
However in my xml file, I have a lot of:

and using the double-dot : is obviously not working, nor with the ’ caracter

begining of xml file is:

It’s a bit more confusing than:

I try without success:

How do I deal with that?

See when you don’t know what you are doing, it can take a lot of time …

See when you don’t know what you are doing, it can take a lot of time

Yes or you pay someone to do it faster.

Yes or you pay someone to do it faster.

Actually I try with exemple of emre adding a ext:car in the xml string and cannot get an extract of car.color.value … so I think, I’ll not be able to do it that way.

You probably need to escape the colon.

Surely parsing returns an array the same as parsing json, if parsing is working but calling value is causing issues surely it has been converted to array without issue, unless I’m missing something.

Well, xml parsing is a bit opaque for me, so I used the strings.

And I have my DigestValue (or any other) from an xml file.

and findWord will extract the value between:

It’s might not be nice or full error proof, but that’s enough for my use.

This isn’t really about the xml.Parse() helper at all. The function reads XML and returns an Object. That’s all it does. There is no other functionality to it.

That ^ “dot” notation is the JScript syntax used to read a value from an Object. Another way is:

Not sure what to say about the colons (:), but you will get errors because the JScript engine doesn’t understand what to do with them, but maybe try this: