Someone showed me another POS software today and something caught my eye and had to request this feature for SambaPOS the moment I saw it!

It is full screen, you click the keyboard icon and it opens the native Windows 10 touch keyboard.

Can we have the option to do this in SambaPOS? I’d suggest rather than change something many already like with the built in SambaPOS keyboard, but add the option to allow the keyboard button in bottom left to invoke the Windows touch keyboard instead of the SambaPOS one?

@VehbiEmiroglu is this straightforward to do? I also appreciate this may only be supported in Windows 10 and Windows 8?

I never tried it but I am guessing running an osk.exe process would work?

Would need hardcoding for other bits of navigation screens I think.

I never tried it but I am guessing running an osk.exe process would work?

No it’s not OSK. OSK is an accessibility feature and AFAIK it doesn’t support all the IMEs. It’s also quite inflexible from the few times I’ve had to use it.

What is happening here with this software is it’s triggering the Windows touch keyboard to show. That is, same as clicking the touch keyboard icon on the taskbar.

Ill try when I get on my laptop

Actually that does nothing on my system. What is is supposed to do? 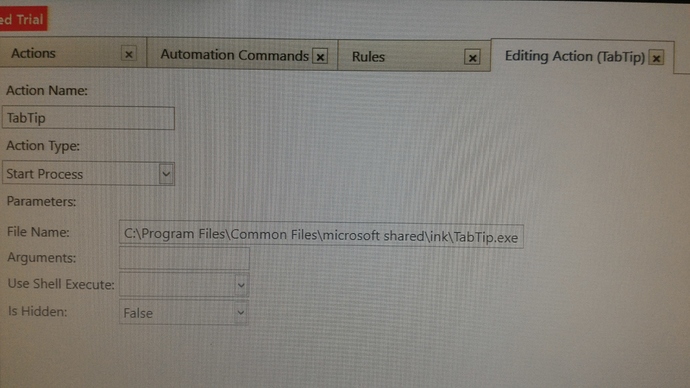 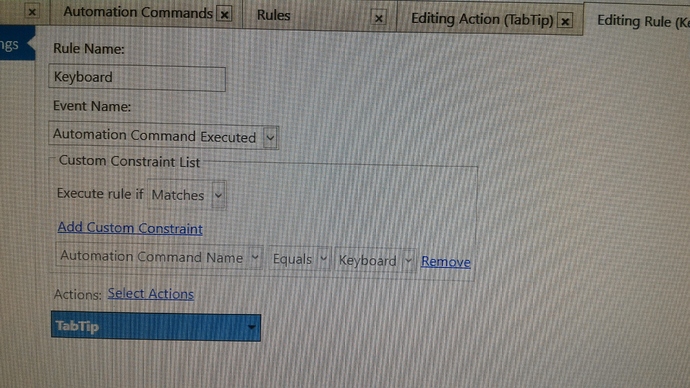 When I just run TabTip.exe nothing happens.

Anyway, its good that works but we need it to work from the native Keyboard button as usually on the POS screen is not where you need the keyboard - it is more so in Manage when adding products, etc.

It’s not problem but still most of customers run on Windows 7. So may be this can be an option.

I think an optional command line can be added to the keyboard. If you can link it to a parameter in the locale settings, it is really would be good.

Maybe add a check box to enable ot or if the software can detect which windows version?

Yeah this would be my preferred option. It’s only going to work on Windows 8 or above. As @VehbiEmiroglu says many customers still use Windows 7 where it can’t be supported and the existing SambaPOS keyboard works for those. But being able to support the Windows keyboard is better than the SambaPOS one. For us and I would say a lot of resellers, any new system being sold now is going to be Windows 10. We haven’t supplied a Windows 7 system for few years now - the license for Windows 10 is half the price also.

After next year, majority of new install could very well become Win10 though.

Win7 has a similar touch keyboard with proper install. As Mark said, it is pretty important for users/resellers who uses a foreign language that are using handwriting.

How about as you said make it as a option and we can run an installation task to add the button both in management and the POS screens?

Hmm, your customers did not ask for that in their POS?

Some customers are more familiar using the search ability and thus typing(or writing the product out). When I operate my Cafe, I type the product name instead of going through menus. At the time, all my product names were in English so the build in Samba keyboard is good enough but when I moved back to NYC, some customers want to WRITE Chinese instead of typing it. Sigh.

Were you able to confine it to a certain location on the screen?

What do you mean by that?

You can use Google Pinyin for Chinese keyboard. When you type any chinese word, pinyin is auto converting this. I’ve tested this before in the SambaPos. 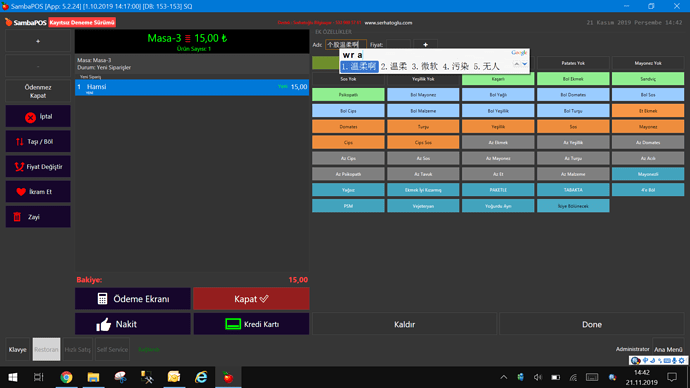 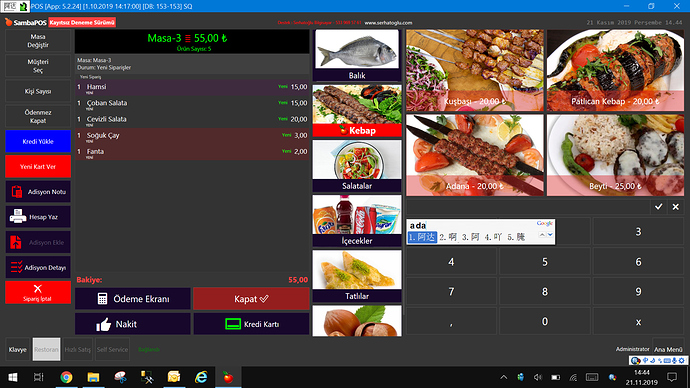 Sadly MANY Hong Kongers cannot type Chinese, Hong Kongers mostly only know how to write Chinese, so the hand recognition input method is almost a must for them. I ran into some of them who cannot even read simplified Chinese characters not to mention using the Pinyin. Sigh.

I set up mine with MS Pinyin and 5 Strokes

Like set the keyboard to where the usual Samba keypad is on lower right portion of the screen.

No, I never made that. That keyboard button is hardcoded. I only made a button that will bring up Windows version with the regional settings you set up.

You can use Windows 10 keyboard for Chinese. For Hongkonger’s install Chinese traditional, Hong Kong language then Microsoft Quick keyboard, install handwriting support. Then they can write with windows native on screen keyboard. Note they will need to launch keyboard using taskbar icon (make SambaPOS to windows) or using keyboard shortcut. This request was to allow SambaPOS keyboard button to trigger native windows on screen keyboard which I think is valuable feature especially for non English keyboards.

Definitely using windows on screen keyboard is fiddly especially with SambaPOS as full screen, but it does work.